A whale of a time

Finally succeeded in getting a ruling against large-scale Japanese whaling 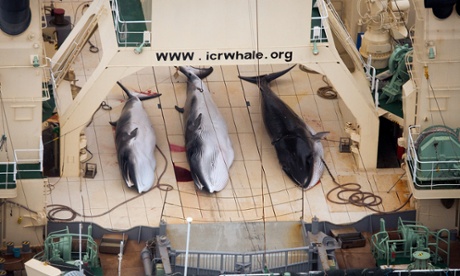 Three dead minke whales lie on the deck of the Japanese whaling vessel Nisshin Maru, in the Southern Ocean. Japan lost against Australia in a case on whaling in the International Court of Justice on Monday Photograph: Tim Watters/AP

The International Court of Justice has ordered a temporary halt to Japan's annual slaughter of whales in the southern ocean after concluding that the hunts are not, as Japan claims, conducted for scientific research.

The UN court's decision, by a 12-4 majority among a panel of judges, casts serious doubt over the long-term future of the jewel in the crown of Japan's controversial whaling programme.

It also marks a dramatic victory for the Australian government, whose four-year campaign to ban the hunts rested on whether it could convince the court that Japan was using scientific research as a cover for commercial whaling.

In its 2010 application to the court, Australia accused Japan of failing to "observe in good faith the zero catch limit in relation to the killing of whales".

Under the International Whaling Commission's 1986 ban on commercial whaling, Japan was permitted to kill a certain number of whales every year for what it called scientific research.

The sale of meat from the hunts in restaurants and supermarkets, while not illegal, prompted accusations from Australia and other anti-whaling nations that Japan was cloaking a commercial operation "in the lab coat of science".

In a lengthy ruling, the presiding judge in the Hague, Peter Tomka, said Japan had failed to prove that its pursuit of hundreds of mainly minke whales in Antarctic waters every winter â€“ under a programme known as Jarpa II â€“ was for scientific purposes.

"The evidence does not establish that the programme's design and implementation are reasonable in relation to achieving its stated objectives," Tomka said.

"The court concludes that the special permits granted by Japan for the killing, taking and treating of whales in connection with Jarpa II are not for purposes of scientific research," he added, before ordering Japan to cease its whaling programme "with immediate effect".

Noriyuki Shikata, a spokesman for the Japanese delegation to the ICJ, said Japan was "disappointed" by the court's decision but would abide by it "as a state that places great importance on the international legal order and the rule of law as a basis of the international
community."

"In terms of a future course of action, people in Tokyo will examine that, but we have made our position clear - that we will abide by the
judgement," Shikata told the Guardian.

He said the ruling would not affect bilateral ties with Australia.

"Japan and Australia are close economic and strategic partners with shared values and interests," he said. "We enjoy mature bilateral
relations in many areas, so now it is important to ensure that our differences over whaling do not affect very good Japan-Australia relations as a whole."

Shikata said he did not interpret today's verdict as an attack on Japan's culture. "We made references to cultural differences and dietary
traditions, but this case was about the legality of the programme under the whaling convention," he said. "The court ruling referred, for example, to a lack of scientific basis for sample sizes ... it
wasn't about cultural differences."

Campaigners welcomed the ruling. "This is an historic decision which lays to rest, once and for all, the grim travesty of Japan's so-called 'scientific' whaling and exposes it to the world as the blatant falsehood it clearly is," said Clare Perry, head of the cetaceans campaign at the UK-based Environmental Investigation Agency.

"With this ruling, Japan must clearly cease its whaling activities in the Antarctic."

The court ruled that Japan had not complied with its obligations covering scientific research as set out in article 8 of the 1946 International Convention for the Regulation of Whaling.

Japan, though, had maintained that its annual slaughter of 850 minke whales and up to 50 endangered fin whales every year was necessary to examine the age, health, feeding habits, exposure to toxins and other characteristics of whale populations, with a view to the possible resumption of sustainable commercial whaling.

Officials in Tokyo said the data could not be obtained through non-lethal methods.

Tomka, however, said Japan had not offered sufficient scientific justification for the slaughter of a large number of minke whales, while failing to kill enough fin and humpback whales to be of any scientific value. It had also failed to explore the possibility of gathering certain scientific data without resorting to killing the mammals, he added.

In its defence, Japan cited only two peer-reviewed scientific papers relating to its program from 2005 to the present, during which it has harpooned 3,600 minke whales, a handful of fin whales, and no humpback whales.

Tuesday's decision, though, leaves room for Japan to revamp its whaling programme to meet an international whaling treaty's requirements for scientific whaling.

And it does not mean the end to all whaling. Japan also hunts a much smaller number of whales in the northern Pacific, while Norway and Iceland continue to kill whales for their commercial value, in defiance of the IWC ban.

Japan has slaughtered more than 10,000 whales since the IWC moratorium came into effect, according to the Australian government.

Japan had questioned the court's right to rule on the case, but said before the ruling that it would accept its verdict. The court's judgements are binding and cannot be appealed.

Monday's ruling is unlikely to have much impact on the Japanese public, whose appetite for whale meat has declined dramatically since the immediate postwar period.

In recent years, stocks of whale meat have remained unsold, with almost 4,600 tonnes stored in port freezers at the end of 2012, according to Japanese government statistics.

Campaigners said they hoped the verdict would result in a permanent end to Japan's whaling programme in the southern ocean.

"The myth that this hunt was in any way scientific can now be dismissed once and for all," said Willie MacKenzie, oceans campaigner for GreenpeaceUK. "We urge Japan to abide by this decision and not attempt to continue whaling through any newly invented loopholes."

Kudos to the governments involved (launched under Gillard I think & finalised under Abbott). Now the interesting bit will be how it's policed.

Disgraceful how much wasn't even being sold. Reminds me of the commercial logging of old-growth forests. Are the Japanese people developing more of a social conscience?

I'm waiting to see how Tony Abbott chooses to ■■■■ this up.

Surely myth busters would’ve been nn eat places to carry out experiments on the whales.

What they manage to put rockets onto and gun powder into, might just save humanity after all


Prefer sardines myself. They don't eat as much krill, and you can use smaller plates.

Obviously never tried to hit one of those midget bastards with a harpoon!

Seriously, who hires these idiots!

Only one thing to do with 4,700 tonnes of frozen whale

what have the whales ever done for us?

I hope people realise that this decision just condemned billions of krill to extermination !! Someone think of the …

They should really have beefed out those scientific studies:

"sashimi vs sushi, a literature review"


Prefer sardines myself. They don't eat as much krill, and you can use smaller plates.

"Careful child! I assure you, Wikileaks is anything but stupid, except when he said I made that teenage fish perform ■■■ to trout. That was stupid and untrue. Did I say ■■■ to trout? I meant to say bass to mouth, though I guess it's basically the same thing, not that I did it."

While I applaud the decision, I still reckon its rather hypocritical, seeing as we are culling sharks. :blink:

While I applaud the decision, I still reckon its rather hypocritical, seeing as we are culling sharks. :blink:

Yeah, but sharks are more bitey.

Well we don't need to kill any whales to know that toxicity levels are rising. Whales becoming radio active, due to the Japanese reactor melt down. Otherwise good news for whales. They will be all over FB now they are protected. Portable Minke?

Well yet to see if the Nipponese actually abide by the decision. I would bet they don't!

This is easily one of the greatest things to have happened in the world, ever. Really happy this has finally come to pass.

Now for the atrocity that is Dolphin Cove (or whatever it’s actually called).

The price of whale has gone up just as I'm about to head over there.