Joining Morcom on the Bombers’ AFLW list is Williamson, a versatile midfielder with excellent goal sense.

Hailing from Traralgon, the Gippsland Power product has represented Victoria at under-15 and 17 levels.

The 17-year-old is known for her tough, combative style of play while also being dominant in one-on-one contests.

AFLW contract manager Georgia Harvey said the club is thrilled to have Morcom and Williamson join their AFLW programs.

“While it’s disappointing to have two players in Georgia and Eloise ruled out for the season, we are very excited to have Alex and Lily-Rose come on board and sign with our inaugural list,” Harvey said.

“Lily-Rose is a highly talented junior who can rotate between multiple positions, including the midfield. Her strength, agility and ability to win contests really stood out and we look forward to continuing her development under our AFLW program.” 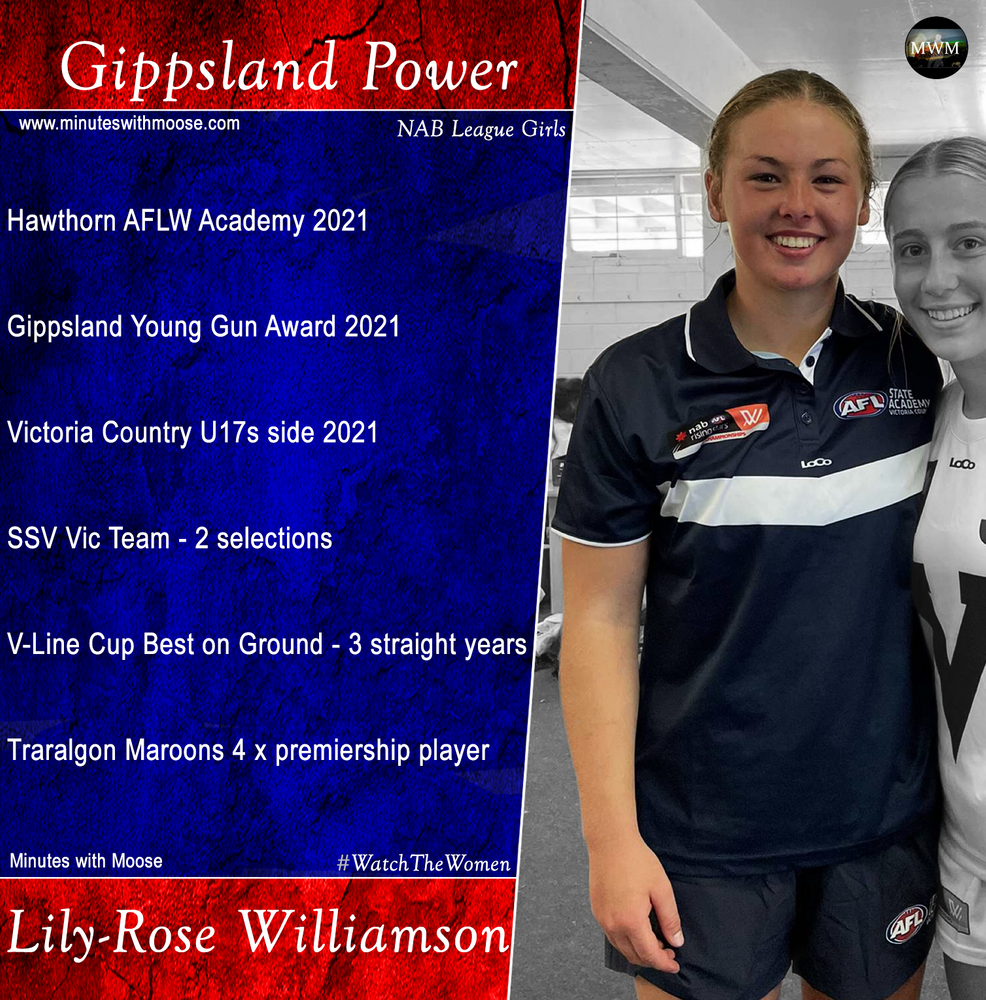 Above all else, there is one thing that Lily-Rose Williamson is synonymous with within NAB League football – and that is the ‘don’t argue’. The majority of players will have some type of edge to their game. Whether it is being able to kick on both...

Above all else, there is one thing that Lily-Rose Williamson is synonymous with within NAB League football – and that is the ‘don’t argue’.

The majority of players will have some type of edge to their game. Whether it is being able to kick on both feet, having a blistering pace or being strong overhead.

“I love to give a good ‘don’t argue’ and a run and carry in my games,” Lily said when asked about her favourite footy moments.

She names Dusty Martin as one of her inspirations, which is fitting because he is one of the finest examples of a great ‘don’t argue’ or fend off.

Lily herself has been using the skill since some of her earliest days of playing football.

“I started against the boys in under-12’s, I love busting out packs and using my strength,” Lily said when asked about her signature fend off. “But after hitting the gym for a few years, especially now - I’m more confident doing them.”

However, this powerful Gippsland prospect has been years in the making – years of hard work and development.

Beginning her footballing life when she was “very young”, the talented Victorian’s interest continued to grow thanks to her family connection to the game.

“Picked up a footy as soon as I could walk,” she said when asked about her origins in football. “But my passion for the game grew from going to dads’ seniors’ games and kicking the ball with his teammates.”

“I loved the physical aggressiveness and the ‘chase’, and of course I loved the social sides of footy.”

Lily excelled at the local level, from playing with the boy’s teams at the Orbost Snowy Rovers and the Churchill Cougars to winning 4 premierships with the Traralgon Maroons.

During her time with the Maroons, she displayed her strength in front of the sticks – showing that she holds a presence up forward and around the stoppages.

“I would have to say one of my games that stood out was a Maroons game,” she replied when asked about her highlight games. “I kicked 5 goals playing mid and remember the excitement I felt with my teammates.”

As well as this local success, for 3 consecutive years, Lily was named as the Best on Ground during her V-Line Cup matches while also getting selected into the Team of the Year.

Not stopping there, Lily has twice been a part of the School Sport Victoria (SSV) team, winning the championship on both occasions.

And, after averaging 13 touches and 6 tackles a match during the 2021 NAB League Girls season, it’s no wonder she also made the Team of the Year for that.

However, despite all of this success and promising achievements, Lily has remained extremely humble.

“I play for the fun of it, not for the titles if you know what I mean,” she said about her many successful years of footy. “I’m so grateful for the opportunities I present to myself.”

One of these aforementioned opportunities came for Lily recently, with Hawthorn inviting her to train with their AFLW Academy.

“Good, I’m loving it,” she said when questioned about her time with the Hawks so far. “The best training I’ve had, the best skillset I’ve had too, like the girls are all very high up there.”

The other notable opportunity that came during 2021 was Lily’s selection into the Victoria Under-17s side where, after collecting 15 disposals, 6 marks and 4 tackles, she was named as their third Best on Ground.

Donning the big v has been something that she holds extremely high regarding her many footballing achievements.

“The best moment is winning the Australian Championship with the Vic girls in Adelaide,” she replied when asked about her favourite footy experiences.

However, whether it has been her selection into Victoria Country or the Hawthorn Academy, her standout season with Gippsland has no doubt helped play a part – typified by her being named as Gippsland’s 2021 Young Gun.

“I would start by saying we are a very united, resilient club,” she said when asked to describe Gippsland. “I love the team aspect of our girls and the professionalism of the coaches, especially Rhett, our head coach.”

“I have been with Power for roughly 5 years now and have excelled and improved a lot.”

“Being a country team, we struggle to recruit a lot of girls, but we embrace every talent in the team. So yes, I love playing for Gippy Power.”

And it is also at the Power where her signature fends off began to attract attention.

“… For Power, we played against Tassie, and I did one of my best ‘don’t argues’ which has hit the headlines a bit.”

As a powerful prospect whose footy reflects her two inspirations, Dusty and Shai Bolton, Lily has managed to carve an exciting path in the world of footy.

However, as someone who values opportunities over achievements, it is not surprising that the humble prospect would also like to thank those who have supported her throughout her footy journey.

“I’d like to thank Chelsea Caple,” she said when asked if there was anyone she’d like to thank for impacting her footy. “She was my talent manager and helped me be aware of my weaknesses and what to focus on when I was new to Power, and she still does to this day.”

“I’d also like to thank Rhett McLennan as well as my dad, for being so passionate about my footy as well as the girls I’ve played with over the years.”

So, what is the next chapter for this passionate Power prospect?

By her admission, Lily’s goals for next year are to “get good stats” and to improve her “game in all aspects, fitness and 1-percenters to a top tier standard”.

“And overall, play AFLW of course, for Richmond and Bulldogs.”

Lily-Rose Williamson, a powerful midfielder who has the strength to break the game open and has the x-factor to turn a game in their team’s favour. It sounds similar to a certain Richmond cult figure.

While we can never say for certain where a player is headed, it seems as if Lily’s footy is headed down an extremely promising path – and in the meantime, we are happy to sit back and enjoy some more fine examples of fend offs.

Channel 9 interview last year. The clips include a BRUTAL fend-off at 49 seconds in — she wasn’t kidding when she said it was a strength…

Will Lily-Rose? Lily-Rose will! I swear every second female is called Lily Rose these days. I want to see her and Paige fending opponents into oblivion.

And she “barracks” for the Tiggers

Do we have the rest of the team yet?

VanDyke out, no emergencies listed. We're all set for our first ever Dreamtime game