Paige Scott is one of the most dynamic players in the AFLW Draft crop. Without a doubt, her best is just about as good as anyone’s, a match-winner on her day, and an ability to turn a game in a quarter, Her sheer X-factor and ability to do so much damage in a few minutes is undoubted, but the big question mark is how she closes the gap between her best and worst.

In the games where everything clicks for Scott, she can kick three or four goals in a quarter, and threaten to kick double-figures some games. But in others, she struggles to really impact the contest. Take the AFLW Academy game for example. Playing forward, the first half she had three frees against and a turnover kick in a half of football clearly looking frustrated. Then she came out and slotted two impressive goals in the last quarter to seal the game, reminding everyone of what she is capable of at her best.

It is easy to forget Scott got the job done on the biggest stage last year, winning the AFLW Under 18 Championships goalkicking. In a Vic Country team that struggled, she did not get the same supply and she subsequently struggled kicking two goals in three games. It was a similar story at the Rebels, kicking the seven goals in seven games compared to her 15 in nine last year - albeit playing up the field more.

In Round 10 against the Dragons, Scott slammed home three goals from 21 touches and six marks, dominating the defence and reminding everyone of how dominant she could be. Scott then backed it up with a 23-disposal effort against the Pioneers, albeit slotting four behinds. Despite that, her last two games showed promise and if she can work on closing the gap in her consistency, and perhaps having more impact off the ball when the game is not going her way, then watch out because Scott is a very special natural talent. 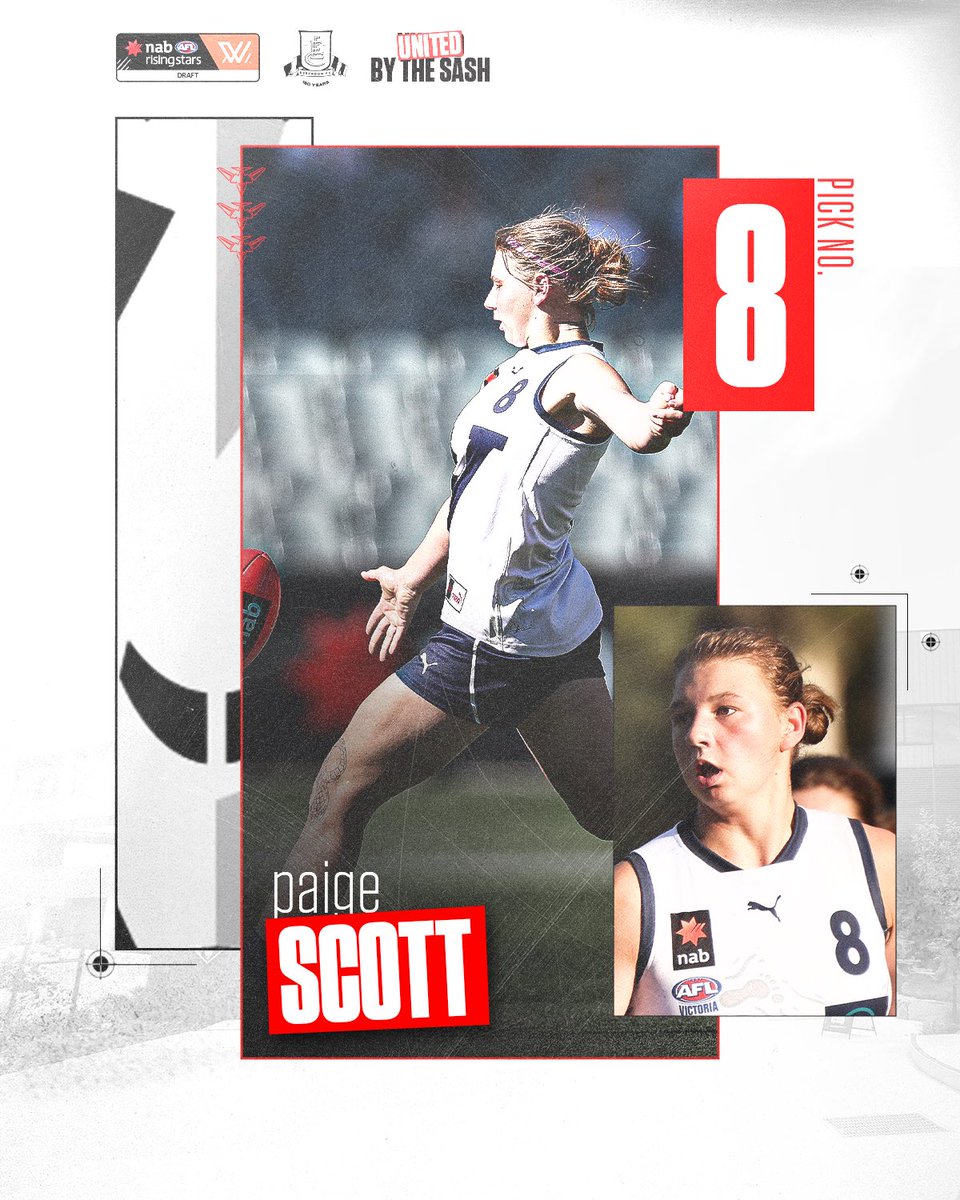 Pie got a paddling.

Is she going to be our Blaine Boekhorst? 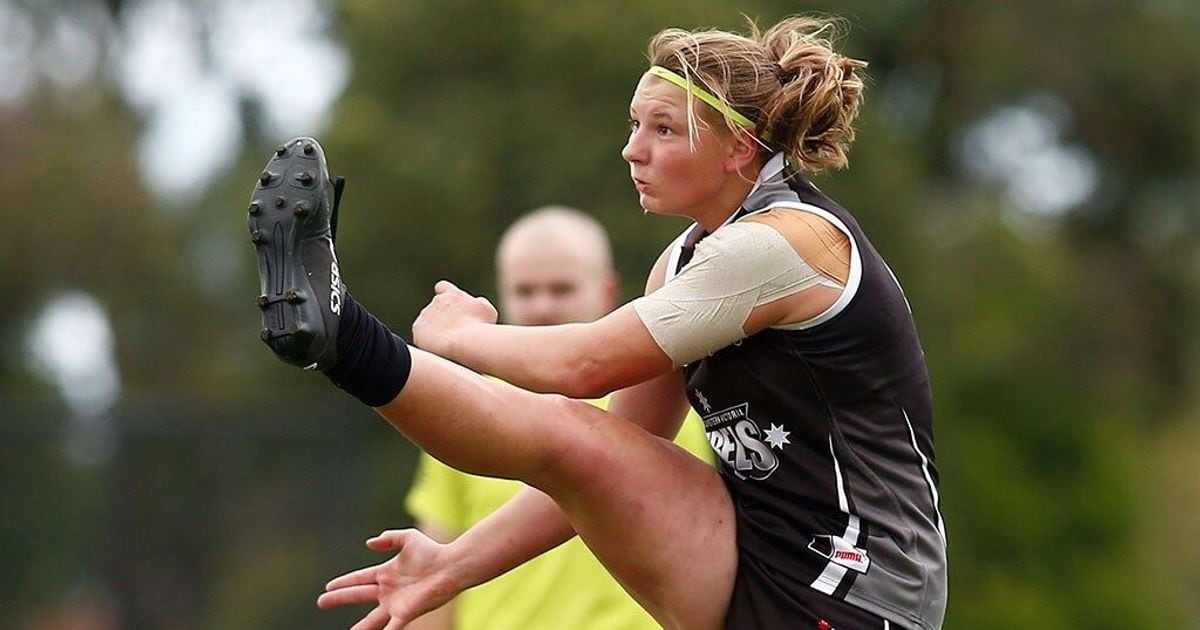 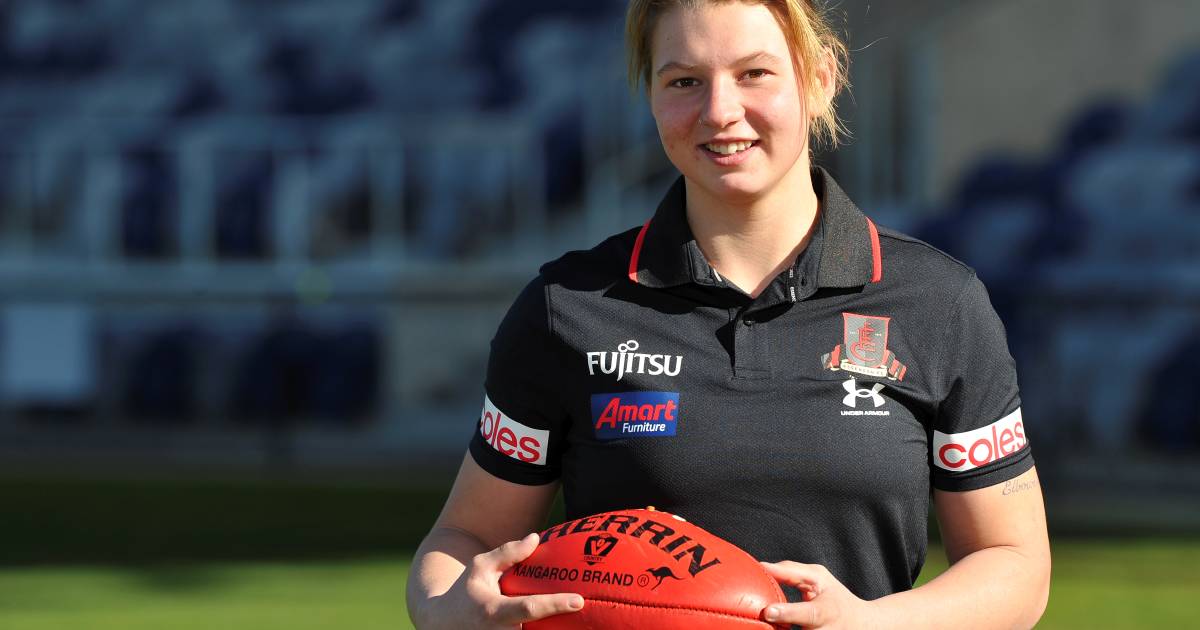 Paige Scott an Essendon pioneer as she becomes just second player to be...

From the same club as Nick O’Brien

Written last year, but Minutes with Moose is always good. 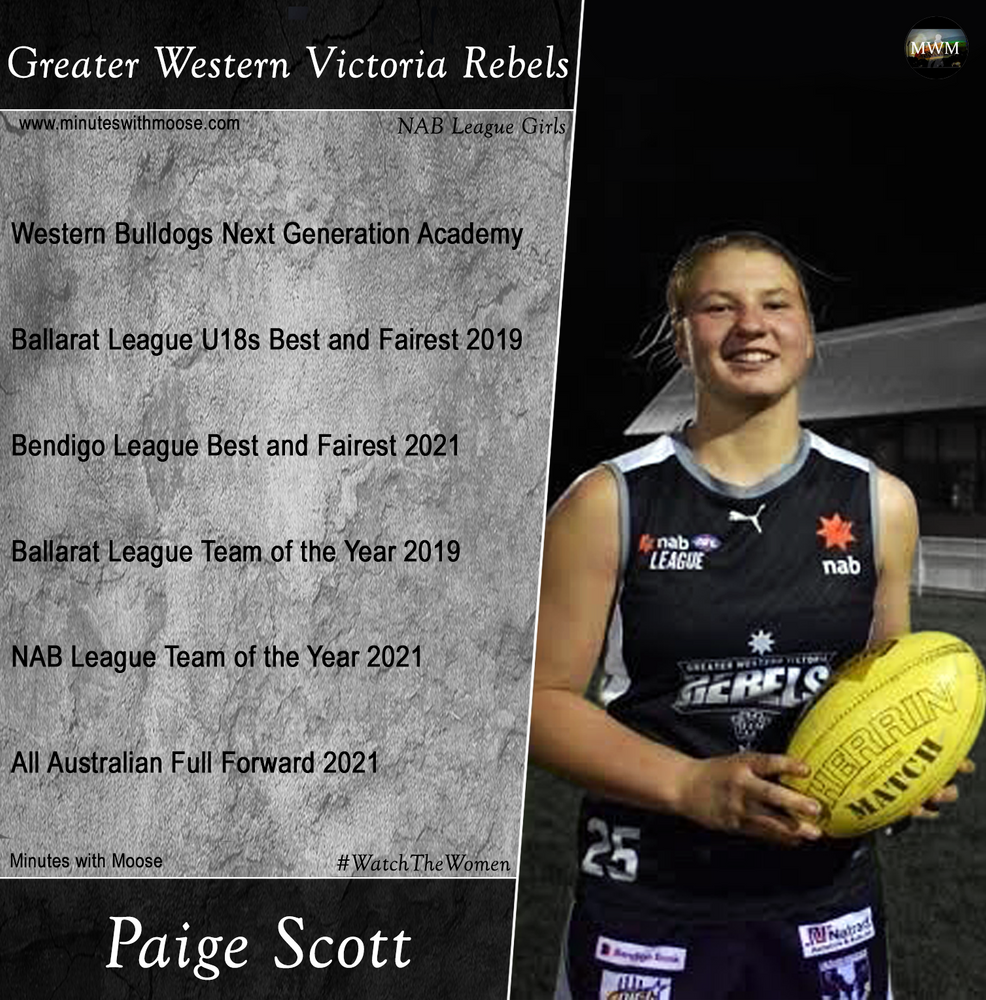 As a prime example of a country prospect, Paige Scott is laidback off the field but dangerous when on it – with great goal sense, making ability and good pace adding up to make her one exciting target up forward. Having had 6 years of footy...

As a prime example of a country prospect, Paige Scott is laidback off the field but dangerous when on it – with great goal sense, making ability and good pace adding up to make her one exciting target up forward.

Having had 6 years of footy experience, Paige, like many exciting prospects, had to originally put her dreams of playing football on hold due to the lack of opportunities.

“Well, I was always a huge Collingwood supporter, I loved footy, but when I was younger they said I couldn’t play footy, so I went on to play soccer for about 6 years,” Paige said when asked about her sporting life before football. “And then I was talking to my mate, and he was like stop playing that sport and come play a real sport.”

“So, he rang up his coach and said, ‘can my mate play a game’ and the coach was like ‘yeah no worries give me his details’ and my mate said, ‘well she’s a girl but she’s as tough as they come, chases sheep, cuts wood, she’s a real country tomboy’.

“So, the Saturday came, and I ended up kicking two goals and loved it ever since.”

This started a theme for Paige, one of kicking goals and playing alongside the boys.

Her third year came with a new change, with Paige moving to the boy’s team at the Avoca Football Netball Club. Then in her fourth year, she joined a girl’s league for the first time where she played for the Carisbrook Lady Redbacks.

The following year, in 2020, “nothing happened” thanks to the suspensions and cancellations brought on by the COVID-19 pandemic.

Then 2021 saw her don the colours of the Greater Western Victorian Rebels in the NAB League Girls competition, as well as play some games for Carisbrook and the Eaglehawk Football Club.

’One of the Best Young Forwards’ - image kindly supplied/taken by the Maryborough District Advertiser.

Throughout these years, Paige has been busy finding success within the game. Having claimed multiple clubs’ Best and Fairest awards, she was also named as the Best on Ground during the Goldfields Under-16s Interleague match.

Paige was also crowned as the 2019 Ballarat League Under-18s Best and Fairest and was named in the league’s 2019 Team of the Year.

Not finishing there, she also made the V-Line team for the Bulldogs Next Generation Academy where she was also named in the Team of the Year.

However, arguably 2021 has been her best and brightest year of football so far, with Paige’s accolades including the 2021 Bendigo League Best and Fairest and a spot in the 2021 NAB League Team of the Year.

She also was exceptional in her appearance for Victoria Country’s Under-19s side, during which she averaged 12 touches, 4 tackles and 2 goals a match.

The icing on the cake however has got to be her selection as the full forward of the Under-19 All-Australian side – meaning, in simple terms, she’s one of the best young forwards in the country.

“Pretty amazing, really took me a few minutes to process it when I got told,” she said when asked how it felt to be named as an All-Australian

“Even now, if someone mentions I kinda gotta realise myself like damn wow I am an All-Australian footballer but it’s a great feeling and one of my favourite moments in footy that’s for sure.”

As well as the success, Paige continued to perform great for the Rebels, finishing with an average of 14 disposals, 4 marks and 2 goals a game during the 2021 NAB League Girls season.

“My time with the Rebels has been great,” she said when asked to describe her time with them. “I love the girls and I have a close relationship with all my coaches.”

“We can stir each other up but then when it’s time to be serious and seek feedback it’s really helpful it’s had great facilities and I can happily say one of the best coaching teams and by far the best oval and I’m very lucky.”

So, what is the next chapter for this exciting Victorian prospect?

As a passionate Collingwood supporter, Paige says that her favourite players are Bri Davies and Chloe Molloy, as well as her “all-time favourite Magpie, Dane Swan”.

Considering that Molloy is a gun forward, who “does turn it on when Collingwood needs her, and she reads the ball well” – one can see the similarities.

Yet, as well as the talent and potential, Paige certainly has the dedication and passion to chase her footballing dream.

“I’m hoping to be top 10 in the draft in July next year, dream club is definitely Collingwood but will be happy wherever, and hopefully one day, win a Brownlow,” she said when asked what her goals for the future are.

Possessing plenty of x-factors and being an aerial and ground-level threat, this young forward would make an amazing duo with her footy favourite, Chloe Molloy. However, we feel like the black and white may have plenty of competition when it comes to next year’s draft.

Played with the boys till three years ago, and she’s no city slicker.

First thing you’d buy if you won the lottery: V8 Landcruiser or Farm

We have one here - Scott is something special. Could be a marquee player before she’s 21.

She has exceptional timing and spring – e.g. that marking spoil early in the game, where I bet everyone thought she’d jumped too early.

First time I have watched her on Saturday night, and as she was walking away all I could see was the number 32 and the same walk and swagger of Tim Watson with a little bit of Jobe.

She is a very fine player in an impressive Team. In case you missed it: Tactics, trends and tales from R1

A surprise top-ten selection at the draft, Paige Scott showed on debut why the Bombers rated her so highly. A marking key forward, she kicked Essendon’s second ever goal 10 minutes into the first quarter and then spent much of the game higher up the field winning the ball and distributing to teammates. Scott finished the game with 16 disposals - the third most on the field - and used the ball at 75 per cent efficiency.

She has real presence and aggression out there, once she gets more confidence and realises she is better than the majority, then look out. 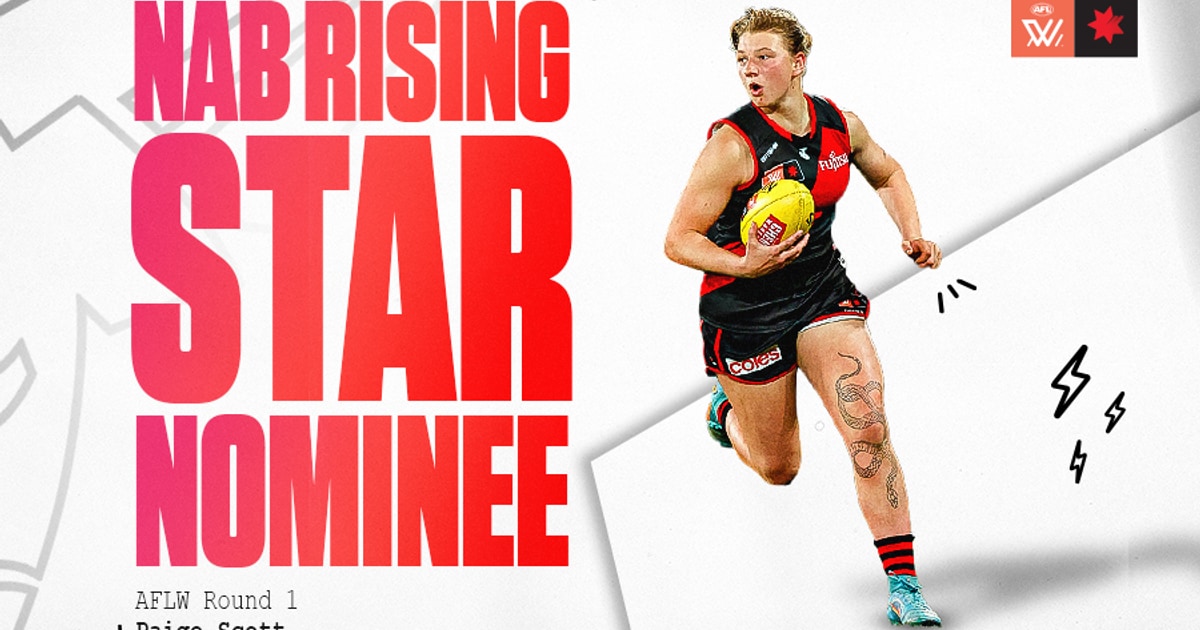