Injury list: How healthy is your team after R3?

Who's carrying an injury? Who's nearing a return? Check out your club's injury list now

Richmond will be attempting to manage Essendon’s multi-pronged forward line without integral key defender Bec Miller, who will miss a few weeks with a short-term hamstring issue.

Ruck Poppy Kelly is also set to miss the game with an ankle injury, and no timeline has been set on her return, but in better news, skipper Katie Brennan (foot) is a test for her first game of the season.

I’m still traumatised by Brennan from 3 years ago, in one of the very very very rare games where Nalder got badly beaten.

Not sure who the match-up on her is (Vogt?)… so fail the test, sorry not sorry.

At least we debuted CBomb and AshleyCooper that day. And we had Tiwi talent.

I say we should win by less than a goal this time. The VFL game follows this at 2:30pm. [Rd 3 VFL W: Richmond vs Essendon]

Before anyone noticed, fixes start time (translated it wrong from Greece time).

Broadcast: Dreamtime at ETU against the Tigers will be broadcast live and ad free on Fox Footy.

Tickets: Secure your spot with adult tickets available for just $10, while under-18s can come along absolutely free (ticket redemption is required.) Grab your tickets here.

Getting to and into the game:

What are we wearing?

(AFL code monkeys are weird; note where the number is shown, and that other stats that ARE collected, such as contested marks, don’t get shown.)

Main point is it’s a near tie.

Tiggers lost to Geelong at a no-scoring-allowed Kardinia Park (and only because Prespakis the younger said “stuff this”), more credibly lost 27-36 to Adelaide (well, the final score looks OK, but they conceded the last six scores), and got to play with the newbie Dawks last week.

Our forwards coach Kirby Bentley perhaps rashly promised to do custom boots for the whole team this week… she is the guest for this week’s W Show (nice click bait title!) The W Show: Are the Bombers the best first-year team in AFLW history?

Sarah Olle and Sarah Black are joined by Essendon assistant coach and former AFLW player Kirby Bentley to discuss the Bombers, the top of the table clash between the Dees and Lions and the importance of Indigenous Round 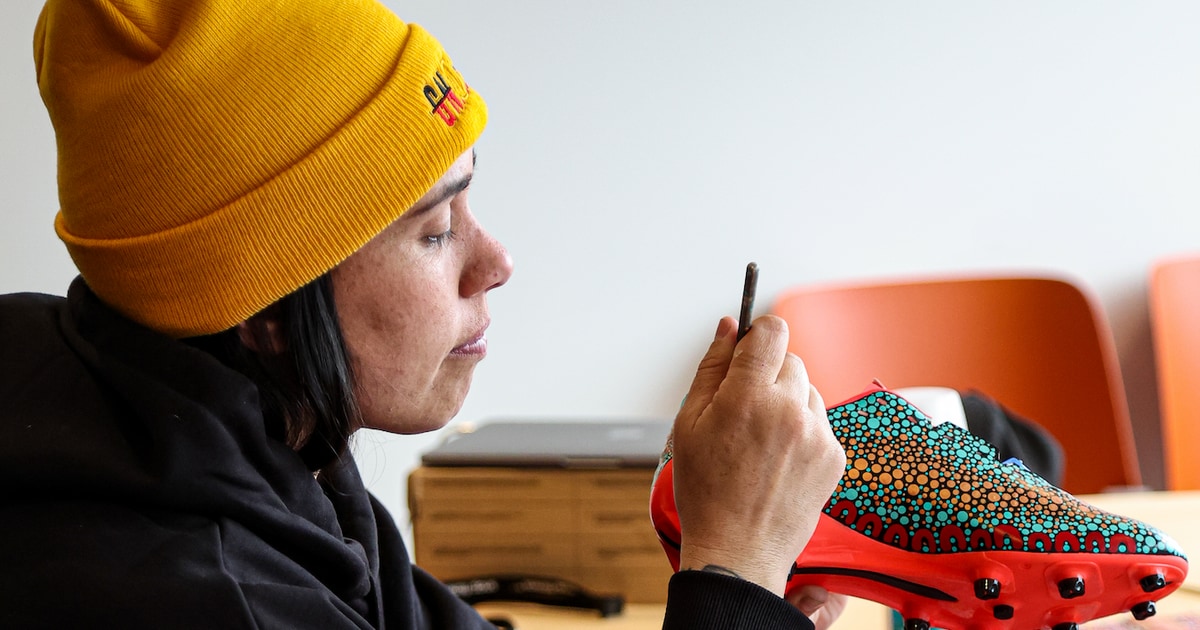 Playing for each other: Dreamtime boots by Kirby Bentley

Each pair boasts its own individual Indigenous design. Full R4 preview: First Dreamtime, plus is this the game of the season?

It's shaping up to be a super Sunday in round four, with Essendon and Richmond meeting for the very first AFLW Dreamtime Match before the two most in-form teams in the competition clash at Casey Fields

In the AFLW’s first ever Dreamtime Match, the established Tigers must face a bullocking Essendon side that is full of confidence. The Bombers are the highest scoring first-year side the competition has seen, averaging 56 points per game, while also piling on a massive 84 points last week. Much of this scoreboard dominance has come late in games, where they have kicked 3.2 (20) in each of their three final quarters and conceded just eight points in the same time period. This looms as dangerous for the Tigers, as final quarters have been their worst this season, kicking just 14 points – 13 of which were in last week’s win over Hawthorn.

On paper Richmond’s midfield group looks like it should easily take control of the game, with Monique Conti, Grace Egan, Sarah Hosking, and Ellie McKenzie running point, but they have averaged just 19 clearances per game to date, the fewest of any side this season, while the Bombers are getting first hands to it an average of 25.7 times. If Essendon continues that clearance work, the Tigers will be under pressure as the Bombers are kicking a goal from a quarter of their inside 50 entries.

Tip: If Essendon can protect its backline from too much pressure, it’s in with a shot for a third win. Essendon by six points.

I have this as our fourth easiest game remaining (the others being the remaining two newbie teams, plus Geelong), and we need at least four more wins to make finals (our percentage is very useful).

Pies are the next, and then you have (good luck) Melbourne and the Bears.

(It’s shithouse how the AFLW shares so little code with the AFL: e.g. where’s the ladder predictor? Seven weeks to go, teams play just a portion of the opposition, it would rapidly make things clearer.)

Monique Conti is an absolute jet and could tear us apart if we dont hold her accountable. Its how Fark Carlton won by having Vesico go nuclear.

Excited to see how the women do Dreamtime, hopefully one day we’ll get it at night time in a stadium like the men do.

Monique Conti is an absolute jet and could tear us apart if we dont hold her accountable. Its how Fark Carlton won by having Vesico go nuclear.

I reject your lamestream media narrative.

Considering I was 50cm away from your vantage point, I reject your rejection!

A nuffie like me could have kicked all three of those umpired set shots (OK, the one from the boundary would be marginal…)

Will be covering this one, so first time I’m speaking to Nat. Keep an ear out in the post match presser all.

Match-up wise this is an interesting one. This will be the best midfield group we’ve come up against, and Conti’s form speaks for itself. We have to at least consider a tag. Seymour and Kelly against Killa and Dani is going to be difficult too. Can say firsthand that Steph is absolutely full of confidence at the moment though, and why wouldn’t she be?

Like DJR said, if Brennan is back, I think we’re in trouble. If it’s primarily Wakefield, I think we can cover their forwards between Kenny, Vogty, Dani and Morcs. McKenzie worries me a little though - I don’t know if we can match her explosiveness when she’s inside 50.

Cat played an awesome game last week. Can’t see the Tigers giving her as much space though - might be more of a scrap this week and less free flowing footy. Time will tell! Just keen to finally watch these brilliant women play for AFLW premiership points in person for the first time.

(It’s shithouse how the AFLW shares so little code with the AFL: e.g. where’s the ladder predictor? Seven weeks to go, teams play just a portion of the opposition, it would rapidly make things clearer.)

This code monkey just did the exercise and the loser of this week’s game finishes ninth… six wins are required. 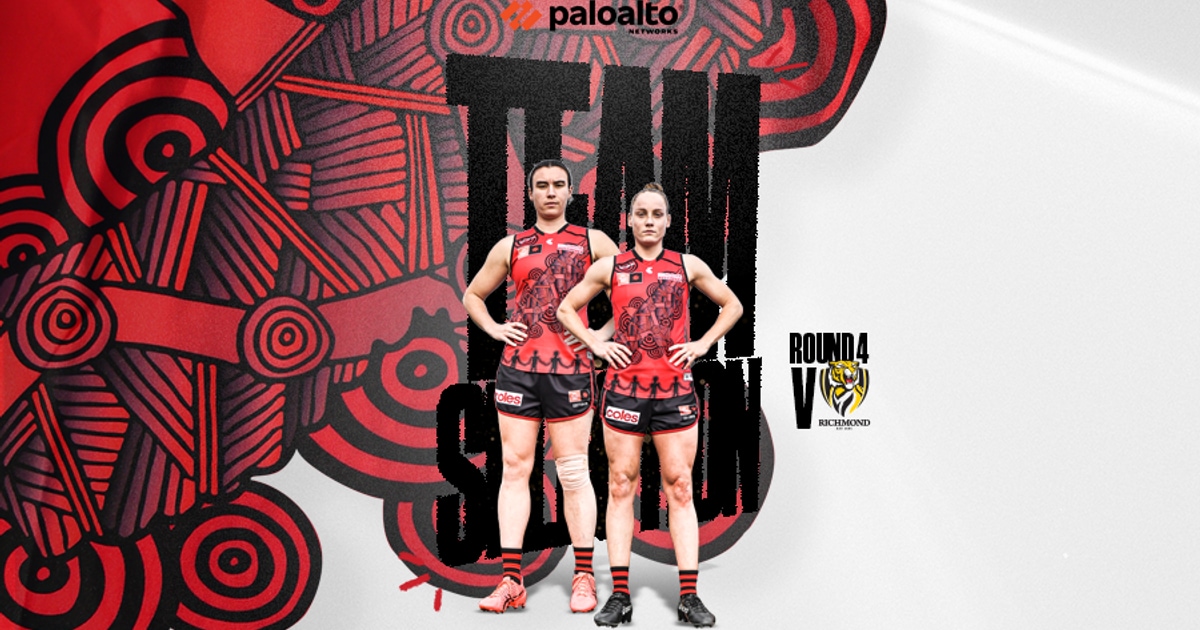 We're all set for our first ever Dreamtime game

Are you able to sit in the grandstand with a GA ticket?

Yep. Cool people stand infront of the grandstand though.