Click on options, last symbol on the right. Will bring up spoiler tags.

Click on options, last symbol on the right. Will bring up spoiler tags.

Hard to tell, it’s all blurry.

Hard to tell, it’s all blurry.

I was deciding if I needed new glasses or should quit drinking.

but id have thought the full stop on the Joker was provided by Ledger. Phoenix must be damn impressive if he’s anywhere near the level

I’m not convinced he was better actually, or even equal. It’s a very very different role he’s playing, despite the fact that the character has the same name. For me I actually found the Ledger version more disturbing as the character is more intelligent/focused. 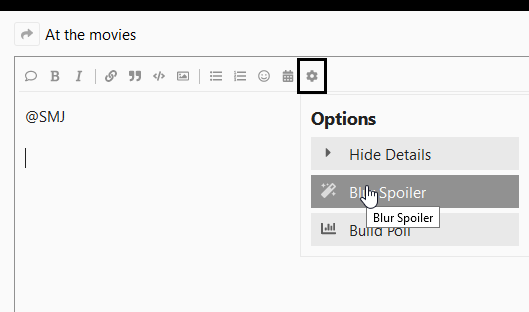 Oh, So it’s like Falling Down with funny make-up?

I haven’t seen it (not a huge fan of the genre so I don’t rush out to see them), but id have thought the full stop on the Joker was provided by Ledger. Phoenix must be damn impressive if he’s anywhere near the level. Which I can kinda envisage, he’s a weird unit anyway.

You may as well compare the steps scene with the batusi

Saw The King on netflix last night and I’m at an absolute loss to understand where all the good reviews are coming from. I mean, it’s pretty, and the costuming is great, and the actors do their best with the garbage they’re expected to work with, but that’s one of the worst scripts I’ve seen made into a serious big-budget film in many a year. Confused about what it wants to be, badly paced, clunky dialogue (doesn’t help when you’re competing with WILLIAM ■■■■■■■ SHAKESPEARE’S take on the same material, admittedly ), and riddled with absolutely submoronic plot holes. And don’t get me started on the history, just don’t.

Watched it with a couple of mates who were all keen to see it, and we were all howlingly disappointed. Absolute bomb.

As luck would have a new TV arrived where l am staying and l caught up with The King on the second night of viewing. What a load of codswallop. Concur with most of the above. The crew have tried to turn Henry into an anti-hero, so much the better to appeal to contemporary tastes. Young Hal seems to be confused about what he wants to be. Starts off as a young drunkard, but one with a regal heart of gold, as opposed to his scheming father. The crown is thrust upon him, he accepts it reluctantly. The film builds up to the battle of Agincourt, but gives no details of the campaign that the battle culminated in, nor much of the aftermath and what it meant, although it is often referred to as a turning point in the history of warfare. The actual battle scene itself captures the chaos of such warfare as well as any ths side of the Battle of the Bastards.

The script takes a bare bones approach to the subject of Henry himself. We are left with a shadow of a character. The lead actor Timothee Chalamat looks undernourished, and Robert Pattinson looks and sounds embarrassed to be playing the Dauphin. The ending is dubious to say the best, and t appears the screen writers ran out of ideas and just wanted a nice, neat package. As a film to depict a fascinatng period and piece of history, this is very underwhelming.

So I saw Joker tonight, I know I’m late to the party.

My first thought is that it was ok. Like not brilliant, but good. I enjoyed it, and Phoenix is really good (I mean he would want to be, he had to carry the entire movie).

But I don’t think it’s the masterpiece that many others think it is. The plot twist about the girl in the building was very very easily predictable right from the start, and the messaging throughout the movie just seemed confused to me.

I mean it’s a story about how an already mentally ill person could go completely off the rails if an extremely unlikely series of events happens in a very short space of time (gets beaten up, loses his job, gets beaten up again, gets humiliated on television, goes off medication, accidentally starts a social movement, mother ends up in hospital, mother exposed as a liar, learns he is adopted, randomly invited on his favourite television show etc etc). And that makes sense I guess, but is that story that much of a revelation? That an already mentally ill person could go loopy if a bunch of terrible things happened to him all at once? I don’t really think so.

I liked it, don’t get me wrong, but the talk of it being a masterpiece is miles off IMO

I agree. It was good, but the raving reviews about it i don’t get.

also agree about the path leading to the end. If he had his ■■■■ together , was success, well liked yada yada and the thread was pulled on and snowballed from there IMO would have been better, and shown a full on falll from grace snap.

Instead as you say guy with mental illness has ■■■■ happen to him and snaps, it’s just how most of similar kind of crap is portrayed.

That’s how I saw it. It was very simplistic in my view. I mean some of it was well filmed, and I enjoyed it, but I reckon the actual plot was pretty rubbish when you think about it in hindsight

Sort of up against joker, should have held off till Xmas.

I’ve never been more aroused by a nude robot either.

Just watched Good Boys.
It’s not rocket surgery, but it is very sweet and pretty funny.

I saw it yesterday.

I agree with a lot of your points but would mark it more harshly. It was long, the plot was simplistic and, worst of all, it was boring.

There are so many other interesting films dealing with descents into madness. If I had my time again I would watch one of those if I wanted that subject matter. The film which it most reminded me of was Falling Down which was a much better film (and FD was entertaining but not great).

Ultimately, what I learnt from the movie was that they shouldn’t do villain back stories.

Ford V Ferrari. 2019 / 152 minutes. 9 / 10
For many car racing fans much of this story will be well known. As with any Hollywood effort, certain liberties have been taken to up the dramatic impact in places, which of course are unnecessary when you have got terriffic source material. I will leave those who might become interested in finding out the facts for themselves to do some research into certain results, rather than spoil the fun.

Bale gives an outstanding performance (as an actor, not the driver) as Ken Miles, an abrasive but massively talented race car driver, who was largely responsible for the development of the Ford GT 40, but is well supported by the rest of the main characters. He nails Miles’ Brit accent. Damon is a bit of a strange choice for Shelby, he neither looks, nore sounds like him, and isn’t anyhere near tall enough to play the Texan. The complex relationship they share is well documented here, as are the office politics various characters are alleged to have played.

The racing sequences are the best l have seen put on film, and get the adrenaline pumping, as does the soundtrack. There should be a couple of academy awards in here somewhere for the technical side of things, and l would be surprised if Bale isn’t nominated.

Watch The Joker, it’s a good characterisation bio -story. Some real insight towards the psychosis that evolves towards the becoming of the eventual Joker.
I still think it’s a shame the Batman movies missed out on what could have been a great joker by Hugo Black.
Just a good movie.

Watched Seven World 1 Planet.
Are these documentaries an exaggerated stretch of former documentaries voice by David Attenborough? From my POV too many aspects seen before, just retold with a different spin.
Ok

Gemini Man, really nice film to watch. Could have been a brilliant movie if not a tad long and a dull ending. Still recommend.

Couldn’t be more excited for a film.

I expect it will have plenty of nominations for academy awards and could potentially clean -up.

When WWI started?
Call me cynical.

It’s getting amazing reviews, I’m really looking forward to it too

This visually looks far more interesting to me than Nolans Dunkirk.