Mystery of sonic weapon attacks at US embassy in Cuba deepens

At least some of the incidents were confined to certain rooms with laser-like specificity, and some victims now have problems recalling specific words

The blaring, grinding noise jolted the American diplomat from his bed in a Havana hotel. He moved just a few feet, and there was silence. He climbed back into bed. Inexplicably, the agonizing sound hit him again. It was as if he’d walked through some invisible wall cutting straight through his room.
Botched surveillance job may have led to strange injuries at US embassy in Cuba
Read more

Soon came the hearing loss, and the speech problems, symptoms both similar and altogether different from others among at least 21 US victims in an astonishing international mystery still unfolding in Cuba. The top US diplomat has called them “health attacks”.

New details learned by the Associated Press indicate at least some of the incidents were confined to specific rooms or even parts of rooms with laser-like specificity, baffling US officials who say the facts and the physics don’t add up.

Suspicion initially focused on a sonic weapon, and on the Cubans. Yet the diagnosis of mild brain injury, considered unlikely to result from sound, has confounded the FBI, the state department and US intelligence agencies involved in the investigation.

Some victims now have problems concentrating or recalling specific words, several officials said, the latest signs of more serious damage than the US government initially realized. The United States first acknowledged the attacks in August – nine months after symptoms were first reported.

The Trump administration still hasn’t identified a culprit or a device to explain the attacks, according to interviews with more than a dozen current and former US officials, Cuban officials and others briefed on the investigation. Most weren’t authorized to discuss the probe and demanded anonymity.

In fact, almost nothing about what went down in Havana is clear. Investigators have tested several theories about an intentional attack: by Cuba’s government, a rogue faction of its security forces, a third country like Russia or some combination thereof. Yet they’ve left open the possibility an advanced espionage operation went horribly awry, or that some other, less nefarious explanation is to blame.

Aside from their homes, officials said Americans were attacked in at least one hotel, a fact not previously disclosed. An incident occurred on an upper floor of the recently renovated Hotel Capri, a 60-year-old concrete tower steps from the Malecon, Havana’s iconic, waterside promenade.

In several episodes recounted by US officials, victims knew it was happening in real time, and there were strong indications of a sonic attack.

Some felt vibrations, and heard sounds – loud ringing or a high-pitch chirping similar to crickets or cicadas. Others heard the grinding noise. Some victims awoke with ringing in their ears and fumbled for their alarm clocks, only to discover the ringing stopped when they moved away from their beds.

The attacks seemed to come at night. Several victims reported they came in minute-long bursts.

Yet others heard nothing, felt nothing. Later, their symptoms came.
The scope keeps widening. On Tuesday, the state department disclosed that doctors had confirmed another two cases, bringing the total American victims to 21. Some have mild traumatic brain injury, known as a concussion, and others permanent hearing loss.

Even the potential motive is unclear. Investigators are at a loss to explain why Canadians were harmed, too, including some who reported nosebleeds. Fewer than 10 Canadian diplomatic households in Cuba were affected, a Canadian official said.

Unlike the US, Canada has maintained warm ties to Cuba for decades.

Sound and health experts are equally baffled. Targeted, localized beams of sound are possible, but the laws of acoustics suggest such a device would probably be large and not easily concealed. Officials said it’s unclear whether the device’s effects were localized by design or due to some other technical factor.

And no single, sonic gadget seems to explain such an odd, inconsistent array of physical responses.

“Brain damage and concussions, it’s not possible,” said Joseph Pompei, a former MIT researcher and psychoacoustics expert. “Somebody would have to submerge their head into a pool lined with very powerful ultrasound transducers.”

Other symptoms have included brain swelling, dizziness, nausea, severe headaches, balance problems and tinnitus, or prolonged ringing in the ears. Many victims have shown improvement since leaving Cuba and some suffered only minor or temporary symptoms.

After the US complained to Cuba’s government earlier this year and Canada detected its own cases, the FBI and the Royal Canadian Mounted Police traveled to Havana to investigate.

FBI investigators swept the rooms, looking for devices. They found nothing, several officials briefed on the investigation said.

In May, Washington expelled two Cuban diplomats to protest the communist government’s failure to protect Americans serving there. But the US has taken pains not to accuse Havana of perpetrating the attacks. It’s a sign investigators believe that even if elements of Cuba’s security forces were involved, it wasn’t necessarily directed from the top.

Cuba’s government declined to answer specific questions about the incidents, pointing to a previous foreign affairs ministry statement denying any involvement, vowing full cooperation and saying it was treating the situation “with utmost importance”.

“Cuba has never, nor would it ever, allow that the Cuban territory be used for any action against accredited diplomatic agents or their families, without exception,” the Cuban statement said.

After half a century of estrangement, the US and Cuba in 2015 restored diplomatic ties between countries separated by a mere 90 miles of water. Embassies were re-opened and restrictions on travel and commerce eased. Donald Trump has reversed some of those changes, but left others in place.
Analysis How could the ‘sonic attack’ on US diplomats in Cuba have been carried out?
If an acoustic weapon is responsible for the ‘attacks’ on US diplomats it is likely to be ultrasonic, but chemical causes must first be ruled out, say experts
Read more

Mark Feierstein, who oversaw the Cuba detente on Barack Obama’s national security council, noted that Cuban authorities have been uncharacteristically cooperative with the investigation.

If the Trump administration felt confident Raul Castro’s government was to blame, it’s likely the US would have already taken major punitive steps, like shuttering the newly re-established American embassy. And the US hasn’t stopped sending new diplomats to Cuba even as the victim list grows.

“Had they thought the Cuban government was deliberately attacking American diplomats, that would have had a much more negative effect,” Feierstein said. “We haven’t seen that yet.” 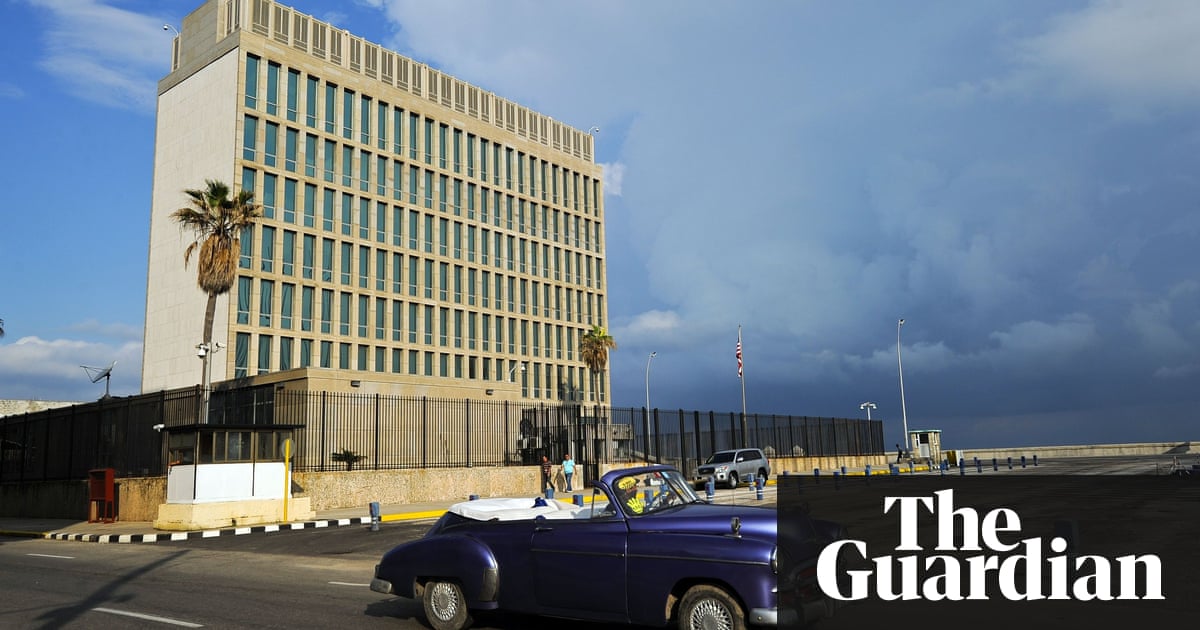 Mystery of sonic weapon attacks at US embassy in Cuba deepens

At least some of the incidents were confined to certain rooms with laser-like specificity, and some victims now have problems recalling specific words

It almost sounds like some sort of chemical or biological agent that causes auditory hallucinations. Cos the guy in the article is right, the physics just don’t make sense as reported.

Nah, there are lots of haunted houses in Havana.

Had to double check that was a proper article/news service.

Does have the hallmarks of a convenient news story to detract/distract Trumps supporters from his current activities (e.g. dealing with democrats to reinstate DACA).

It’s real enough, I’ve heard this from a lot of different news outlets over the past few weeks.

If it was a trump bullshitting campaign, trump would be bellowing about it himself, or his close flunkies would be. He isn’t known for subtlety. But not everything going wrong in the world is trumps fault or a conspiracy theory spread by trumps minion.