Did our spies conspire with the CIA in Allende overthrow

This appeared in Crikey yesterday.

But the question is: did our spies help the CIA overthrow democratically elected Chilean president Salvador Allende to placate Nixon’s pathological hatred of any politician further left than himself? 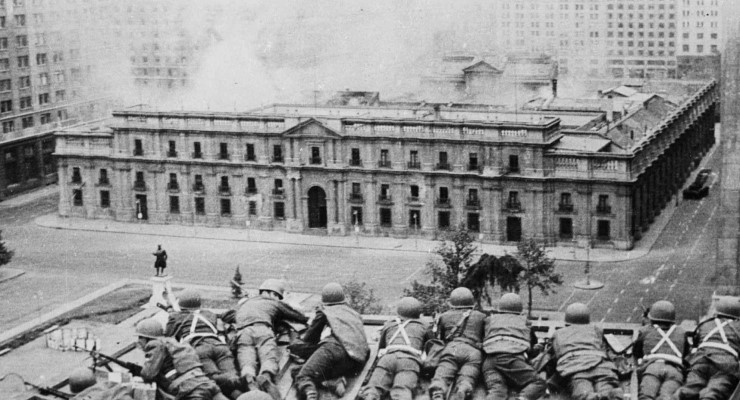 Bombs rained over Santiago, Chile, on September 11, 1973. That morning, after months of political chaos, the country’s military launched a coup. Holed up in La Moneda , the presidential palace, Salvador Allende, the country’s socialist president, recorded a final, defiant radio address to the country. Then he took his AK-47, a gift from Fidel Castro, and shot himself.

Chile’s coup introduced 17 years of repressive military dictatorship under Augusto Pinochet, in which thousands were killed, tortured or “disappeared”.

That dark moment in the nation’s history would never have happened without Western meddling. We know the United States was desperate to remove Allende, and that the CIA helped create the conditions for the coup and prop up the Pinochet regime.

But we know less about Australia’s involvement. We know Australian spies were stationed in Santiago at the time. We don’t know what exactly they were doing there. Soon that could change. Tomorrow the Administrative Appeals Tribunal (AAT) will hear a case which could reveal the extent of the Australian Secret Intelligence Service’s (ASIS) involvement in the coup, following a four-year campaign by UNSW Canberra Professor Clinton Fernandes.

But the government and intelligence agencies are battling to keep that information secret.

How the West broke Chile

To understand what Australian spies were doing in Chile, we need to understand the country’s tragic history. In 1970 Allende became the first democratically elected Marxist head of state in the Americas. US president Richard Nixon was furious, and wanted Allende gone. According to the sinister logic of cold war realpolitik, Allende was a threat who would bring Marxism to the Western hemisphere.

Desperate to stop Allende taking office after a narrow election win, the US tried to stage a coup. First, it had Rene Schneider, the apolitical head of the country’s armed forces, murdered in a kidnapping attempt gone wrong. The killers were paid off by the CIA in hush money.

The assassination of Schneider backfired. Chileans, fed up with foreign meddling, rallied around Allende, and his victory was soon ratified by the country’s congress. Two days later, Nixon gathered his national security council to discuss ways to “bring about his downfall”. It did that by creating a “coup climate”, helping engineer so much economic, social and political upheaval that the military would feel bound to intervene and remove Allende. It took just three years.

We know all this because when it comes to disclosure about what their spies were up to the Americans are far better than we are. Most information on Chile was released at a Senate committee in 1975 and in 1999, when the Clinton administration began declassifying pages of documents about Chile after Pinochet’s arrest in London for human rights violations.

Australia’s involvement remains far more opaque, and everything we do know is pieced together from royal commission reports and public statements made decades ago.

In 1971, prime minister Billy McMahon stationed ASIS officers in Santiago at the Americans’ request. Importantly, until newspapers broke a series of sensational stories in 1972 most Australians, even those in high levels of government, didn’t even know about the existence of ASIS, set up by Robert Menzies two decades earlier.

Months into his term, Gough Whitlam discovered the presence of ASIS officers and ordered their removal in early 1973. He would later confirm before Parliament in 1977 that ASIS had been in Chile.

The historical account of Australian involvement we are left with is thoroughly unsatisfactory and incomplete. So in 2017 Fernandes applied to the National Archives to get documents about ASIS’s role in Chile released.

“There’s no way for us to say we weren’t involved,” Fernandes said . “It may be that it’s not just some minor, tangential involvement. It may well be precisely because of our remoteness, we were useful to the CIA.”

Two years after applying, the agency refused him, citing an exemption in the Archives Act which prohibits release of material that could damage the “security, defence or international relations” of the Commonwealth. Coincidentally, the archives are headed by David Fricker, a former deputy director-general of ASIO.

Fernandes challenged that decision in the AAT. Tomorrow morning he will present his case, accompanied by barrister Ian Latham, who has assisted him on similar disclosure matters. After that, the room will be cleared, and for the next two and a half days the case against disclosure will be presented in secret.

That’s because ahead of the hearing, Attorney-General Michaelia Cash issued a public interest certificate, which means submissions made by intelligence agencies and evidence adduced to support the suppression of documents will be made entirely in secret. If the tribunal decides not to release the information, we will never know why.

In a letter seen by Crikey, Cash writes that she’s satisfied disclosure of information would be contrary to the public interest because it would “prejudice the security, defence or international relations of Australia”.

The public interest certificate is incredibly broad. It means Fernandes will have no opportunity to see or test the evidence against his application. It also means the evidence upon which Cash based her decision to issue the certificate will also stay secret.

From what we know, the secret case against disclosure so far seems to hinge on confidential affidavits from three people: one from ASIO, another from ASIS, and a high-level official with an intelligence background at the Department of Foreign Affairs and Trade. The ASIO and ASIS officers are providing evidence under assumed identities, standard practice in cases involving undercover work or terrorism offences, but unusual for a declassification case. All three will provide secret evidence.

“Basically, it’s the intelligence community using these tricks to conceal evidence of past crimes,” Fernandes said.

Cash’s office did not respond to requests for comment.

Independent Senator Rex Patrick, a long campaigner for better transparency, said it was “beyond comprehension” that the government and security agencies would “seek to suppress our history in this way” given other countries like the US and UK have opened up similar files.

“I wonder if the irony was lost on Attorney-General Michaelia Cash as she signed a secrecy certificate covering events that took place before she was even born,” he said.

In the almost 50 years since the coup, the world, and the country, have moved on. The cold war ended. Pinochet died 15 years ago, never convicted of a series of crimes. Chile is rewriting its junta-era constitution.

But the paranoid secrecy of Australia’s intelligence community remains.

Wow! Thanks…interesting. the AAT thing wont be public though will it?

As an aside, I worked with a Chilean guy in my last job. His first name was Vladimir so I sort of assumed he’d have been an Allende sympathiser, but no, rabidly on the other side. There was a doco released called La Batalla de Chile about the coup, which he was watching with his family, when he saw a group of observers on the roof of a nearby building. “Hey, isn’t that you, Uncle Julio?”, and on getting the answer Yes, asked who was with him. “Oh, they were CIA guys”.

And in a second connection, there was recently a series on SBS On Demand called Secret Heroes (?) about a Finnish diplomat who sheltered dissidents and helped them escape the country. At one point, a woman went into the sports stadium, where they were holding people they intended to kill, asking whether her husband was there. The colonel she spoke to, who shared a family name with my workmate, just pulled out a pistol and shot her in cold blood. I wondered if that was Tio Julio.

And in one of my shows on Netflix (Inmate No. 1), a president is elected in Mexico who, while not being aligned to any political wing, is very much left of centre, so, naturally, is framed for corruption and thrown in jail to be beaten and killed.

There’s a psycho causing mayhem in opposition to him, and his part is as a CIA man sent by the Trump (not explicitly named, but implicitly) White House. They certainly do have a history of trying to remove any Latin American governments who could be argued to be left-wing.

I have always assumed that every Embassy has its spook.
What Patrick needs to do is track our Santiago Embassy movements in and out around that time. There has been a history of problems with that Embassy, people suddenly withdrawn - in part connected to strict Chilean policy on homosexuality.

Wow! If we are more opaque than the US, I wonder who uncle Sam’s spies use to do the dirty work?

Partner they can trust

Laws where it won’t become public

If not, worth tracking down.

There was a scruffy Third Secretary in the French Embassy who had access to PM Hawke’s and other Ministers offices.
Next thing French and Australia secure votes to overcome USA and others to ban Undersea mining.
I joined the dots - New Caledonia and Australian nickel interests, rumour had it that the Third Sec was the French President’s man,

Whe I was living in San Francisco in early 2019, we had a meeting with ambassador Joe Hockey, and he told us that he was boss of more than 700 staff in Washington. Some-one asked if that included our “spies”, he said that the ASIS and ASIO no longer work at ab=ny Embassy "as far as he knows"

If not, worth tracking down.

Anyone who hasn’t seen the 3-part 1988 Channel 4 TV drama series A Very British Coup should get hold of it ASAP. It’s a cutting exposé of the inner workings of right-wing political thuggery. It has a script by arguably the greatest TV drama scriptwriter ever, Alan Plater, and features a tour-de-force by my good friend, the late Ray McAnally as the betrayed British Labour PM.

(If you’re looking for more Ray McAnally performances, check out The Mission, My Left Foot and A Perfect Spy.)

Or they could just get and read the Book.

‘Having a red with ambassador Hockey’

history of trying to remove any Latin American governments who could be argued to be left-wing.

I think any government slightly to the left of fascist would do.

The saddest stories I’ve ever heard have been from El Salvador refugees here.
Perversion of the Monroe Doctrine
Then there was the Iran contra deal

One of those posts where they would have a lot of attached liaison people or those on secondment working with US on collaborative programs. Haven’t been there in years, but remember quite a few in braided uniforms.
At one stage our High Commission in Delhi was crammed to the rafters with officers from our Immigration Dept working on 3 month rotations ptocessing education visas.