It is a PDF so the formatting gest farked if i quote so follow the link.

Google has made their submissions to the AG in relation to internet piracy publicly available.

hits the nail on the head IMO.

*edit: just to clarify, i'm referring really to the last paragraph of the letter.

Ok. So Somali pirates are invading australia or something and the govt wants to turn back their boats? I'm also not getting this internet thing. What is it? Can I touch it?

Yep I'm with you. Was reading all about Netflix yesterday. What's the library like is most stuff on there?

Can we stop calling it piracy? It's theft

Can we stop calling it piracy? It's theft 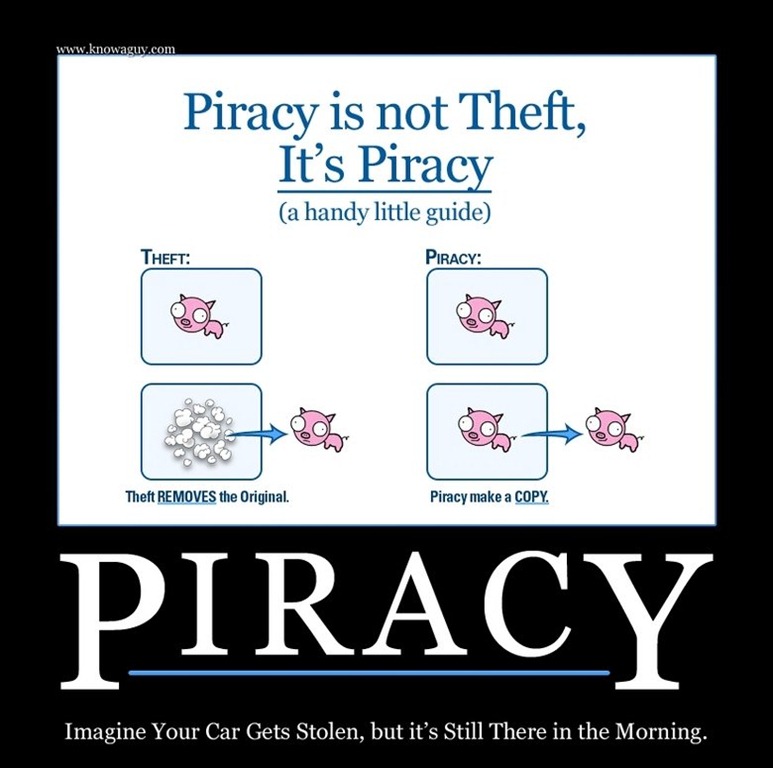 This is just semantics. With piracy, the copying reduces the potential/real income of the owner of the original - so it's pretty much stealing.

But you're not depriving any owner of the right to have it. Just denying the creator income.

Stealing income that legally belongs to the creator?

I put out a record about 2 years ago, within a day of it launching it was on btjunkie seeding by more people than had purchased it in the first week

did I feel like i had been a victim of theft? not really. Its the paradigm.

did I feel like I had been a victim of theft? yep.

Can I insure my gear against theft, yes, and i insure my music against pirating. NO.

Stealing income that legally belongs to the creator?

But isn't it only potential income? Does that mean it is only potential theft? After all, if it isn't available for free online, then who is to say that they are going to actually purchase the goods legally?

I just don’t get this. If it’s on a shelf and has a price tag and you don’t pay for it it’s stealing. Whether it’s a virtual shelf or a real shelf doesn’t matter. Whether you are copying it or taking it doesn’t matter either. It’s a bit like reading the entire newspaper in the newsagents and putting it back on the shelf.

It's not even against the law in some countries. Canada for example.

Over here it's illegal for someone to post their files in a place, the sole purpose of which is to share those files.

So Seeding is illegal, downloading is not.

Why not put the onus on people not to share their files?

Any attempt to stop it on a coutnry-by-country basis clearly misses the point of the intertubez.

I regard this as the same as sharing cassette music in the old days. Frowned upon by the music industry but it happened anyway. Why did they invent double cassette players if they weren't meant for copying music? There is always going to be this problem. Like many people, if I enjoy watching a TV series or movie then I will usually go and buy it as a keeper even if I've already downloaded it.

I was thinking this was about all those nasty hackers who are like water pirates, as you go past, the take everything that is yours.  As such the biggest pirates these days are governments.

I think PR is the problem for the anti-piracy guys.

Stop calling it piracy, because pirates are awesome and being a pirate sounds cool.

Call it communism or something.

yes we should ban libraries stop sharing photo's and nobody should be wearing a blue shirt I thought of it first. no singing anything without permission and all these words came from somewhere else should track them down and pay up.Wonder if the inventor of the wheel is still getting royalties no one would ever of come up with that. Copyright is the right to copy. No one sang said or invented anything on their own unless they live in a cage in which case they don't need protection as we don't know what they are doing, but if it's the same as us they better pay up. Everyone is a product of their environment (and parents if they have them) so they better cough up some of the money to their teachers and those they stole their ideas from. Hypocrites all of them. If you aren't happy with the millions you get from being famous then can't really be out there batting for you to get more at the expense of people who have less, Bite me!!!

Not sure why all these people who don't get royalties are soooooooooooooo up in arms about it. Assume just bitter and twisted and too scared to to get stuff free so don't want others too.