Ooh look, an article more than 3 months on…

Mentions an additional practice match two weeks earlier than the previously announced one — very likely to clash with either the VFL practice match and/or the AFL match (which is in Freo, though). 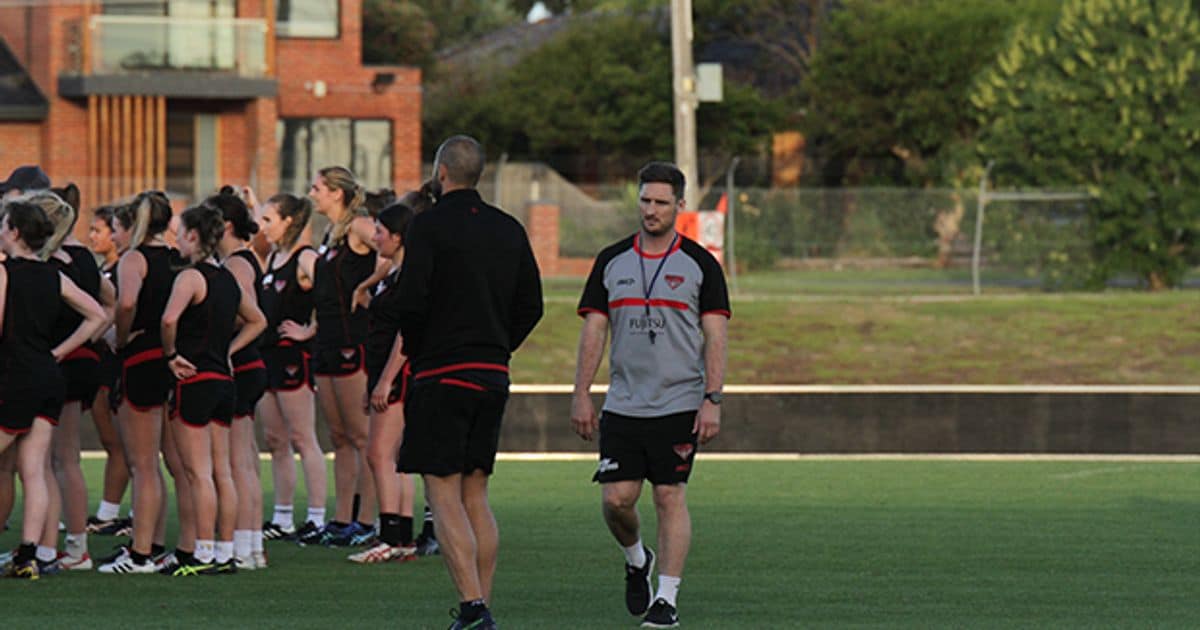 Having returned to training just over two weeks ago, Essendon’s inaugural VFL Women’s side is moving ever closer to the season proper in May.

Coach Brendan Major has lauded both the commitment of his charges and the support they have received from the club as the major factors behind the team’s day-by-day development.

“They’re going really well,” says Major of his side, 90% of whom have improved on their pre-Christmas individual testing times.

“Half our list is signed up and ready to go … there’s a good mix of AFL and VFL experience; you’ve got Jess Trend and Lisa Williams going really well with the experience they bring and Simone Nalder and Beth Kearney fighting for the ruck spot.

“We’ve got a great high-performance team led by [Head of Strength and Conditioning] Emily Bland, so she’s got them moving quite well.”

With just under three months remaining until their history-making Round 1 clash with Hawthorn on May 6, twenty players have officially been made Bombers. Fifteen positions on the senior playing list, including five TAC Cup girls, will be filled in the coming weeks.

Bringing a squad together from scratch presents any number of not insignificant challenges. Major has identified the establishment of a strong team culture as a crucial foundation for his team.

Essendon’s first hit-out will be a practice match against foundation VFL Women’s side Melbourne Uni on March 31, with the venue still to be confirmed. As one of eight clubs fielding an AFL-aligned team in VFL Women’s for the first time in 2018, Major says he and his players are burning with a determination to make a name for themselves.

“We’re trying to uphold the values that the Essendon Football Club has instilled in the men’s program over the last hundred years and we’re trying to make sure that we’re playing to the brand.”

Retrospectively the VFL site has announced we had a 37-37 draw versus Collingwood at The Hangar back on April 7.

Hopefully the club can be bothered to mention the second practice match this weekend, which is the curtain-raiser for the VFLM round 2 match at Willy.

I know what you mean, but I would just like to point out that there is no such thing as ‘VFLM’.

Hopefully the club can write something in plain English for once and minimise the puff. What’s with “playing for the brand”? I thought they were supposed to be playing for the team.

Agreed. “Playing to the brand…” 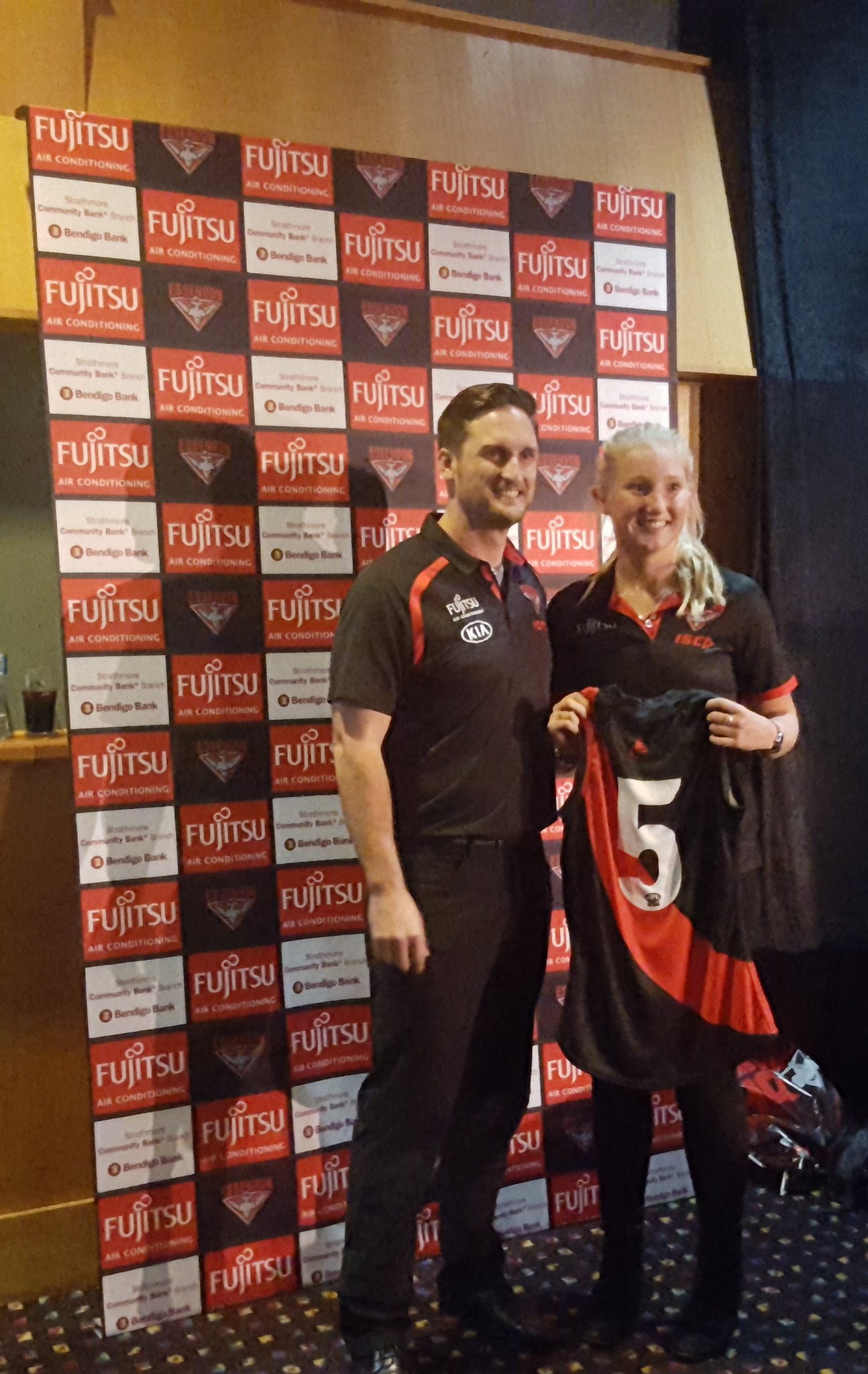 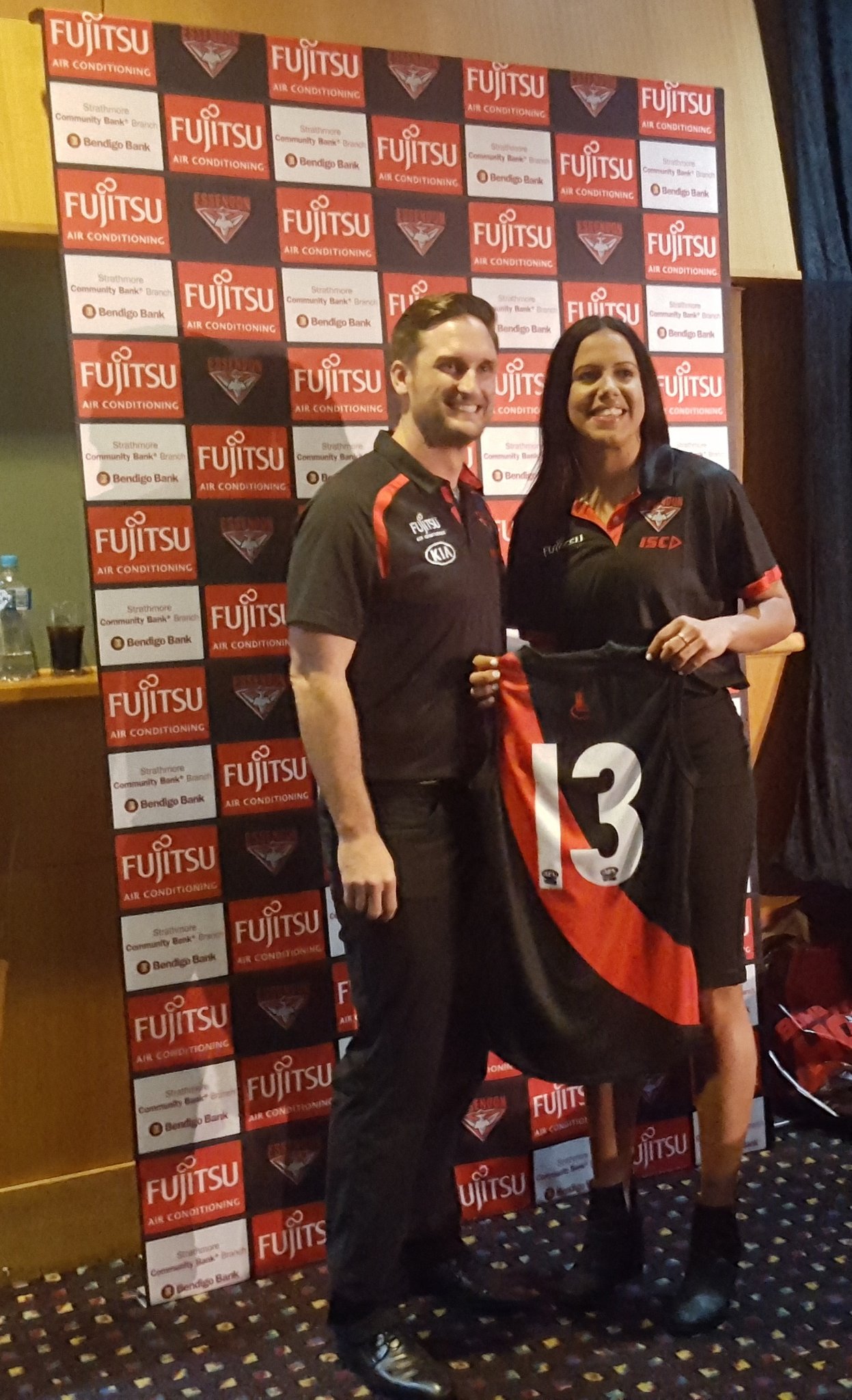 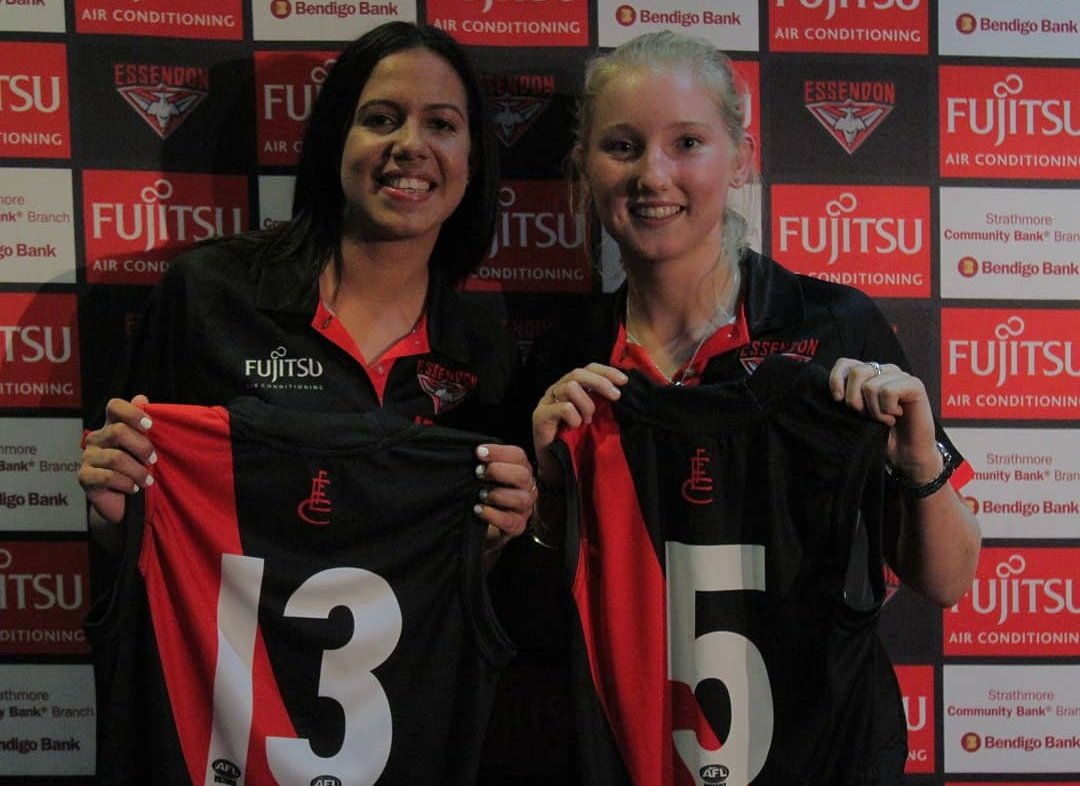 Found the fixture and how to be a member but can’t find the team list.

They haven’t published a team list yet. We have been waiting patiently but hopefully now that the jumpers have been presented, it will be soon. @Catherine_Lio

Very soon now! Wanted the jumpers given out first.

Thanks. I think it fair for all of them to get some publicity. Essendon’s inaugural VFLW Squad has been confirmed, featuring an exciting mix of youth and experience as the team heads into its first season.

Congratulations to Jess Wallace (#36). a local Frankston girl from a footballing family.

More on that and other topics in the rash of new posts tonight. Thank deity for the VFL(W) to distract me from the past week’s “efforts”. To journey from Canada to Victoria in the pursuit of a dream of playing Australian Rules is an extraordinary love letter to the game.

And it’s that single-minded commitment and passion that has led Canadian pair Kendra Heil and Valerie Moreau to pulling on the red and black in Essendon’s inaugural VFL Women’s side.

Ontario native Heil and Quebec-born Moreau played together at the former VFLW club Eastern Devils in 2017 and stayed side-by-side when they came to the Hangar.

Although only introduced to Australian Rules at the age of 24, Heil’s understanding of her craft has grown in the time spent recovering from consecutive ACL injuries.

“I spent a lot of time coaching, watching footy, analysing footy, doing stats, bench manager, all the roles that you never do as a player so that I could see the game from different angles and learn that way,” Heil said.

“Obviously being from Canada, one of the areas you lack experience in is watching footy, you don’t grow up with it.”

Moreau describes Heil as a “big sister”, and she’s not the only Canadian player who would look to Heil as an aspiration. After arriving Down Under in 2013, Heil became the first Canadian player drafted to an AFL Women’s list when she was selected by Collingwood as a free agent in October 2016.

“I’m an example for the girls to say, ‘You can come and do this. This is possible’,” Heil said.

Moreau only touched down on Australian soil in November, 2016, but immediately gravitated to the Devils as she stayed with Heil.

“When I first got here and came to training, she welcomed me,” Moreau said.

“I think we’re both pretty independently strong people but we’re always going to be there for each other if we need to.”

While describing coming to Essendon as “the best decision I’ve made, pretty much ever”, Moreau concedes that there are moments when being so far from home takes its toll.

“I feel a little bit homesick,” the small forward admitted.

“At the beginning it’s easier because everything’s new, everything’s exciting. When you get into a bit of a routine, you miss home a little bit more.

“So the support has been really good from home and even from here with (girlfriend) Sarah. Her family has been treating me as another daughter.”

In round two against Melbourne Uni, Heil and Moreau played their first match together for the Bombers – with their friends, family and teammates back home cheering them on.

“We’ve had lots of support from our Canadian team, our Team Canada coach Jason Arnold really pushed us to keep going with footy here and then family and friends have been great,” Heil said.

And not a fringe player, she’s playing CHB. To watch the composure with which Kirby Hicks plays, it’s hard to believe that she sustained nine fractures in her spine in a freak accident not long ago.

In June 2016, the 31-year-old went up in a marking contest while playing for her former VFL Women’s side Diamond Creek against the VU Western Spurs and a sickening double whammy temporarily robbed her of the ability to walk.

“I was hit in the back and I instantly felt like it was going to hurt,” Hicks recalled.

“Then, when I got to the ground I was coming back up and someone landed on top of my head.

“I remember clear as day that as soon as I got hit that second time, something wasn’t right.”

That feeling become horrifyingly clear when Hicks tried to crawl over the boundary line and realised she couldn’t move. After being stretchered into the rooms, she whispered to her nearby former coach Darren Logan that she couldn’t feel her legs.

X-rays confirmed that Hicks had three fractures in her lower back and had fractured the C1 to the C7 vertebrae in her neck. For five days, she lay in her hospital bed unable to move, because any elevation would have caused further damage.

Hicks is no stranger to recovery, having racked up a staggering 13 broken arms before her back injury. Even so, rehabilitation for an injury as debilitating as a fractured back was the hardest process she had ever faced.

For a few days, Hicks was buried in texts from friends, family, teammates and even women’s football legend Debbie Lee all wishing her the best. It was hard to shake the feeling that the messages were disguised obituaries for her career.

“There was probably a small window where I thought the call would be not to play footy anymore,” Hicks said.

“That comes from sitting at home when you’re left on your own, pondering while everyone else is moving on with life. There’s definitely a time when you think, ‘Maybe this is it.’”

Dark days, indeed. However, the flame did not die in Kirby Hicks.

“As time goes on and your rehab continues on, you get bigger and better and you feel stronger every day. There’s a sense of urgency to say, ‘You know what? I’m going to get back and play. Watch me.’”

And get back she did, running out with her Diamond Creek teammates for round one. Hicks had her most consistent and prolific season in 2017, missing just one game and playing a key part in Diamond Creek’s journey to the Grand Final.

Her chances of being drafted to AFLW had never been higher, but she was overlooked as clubs planned for young selections last October.

“I really felt pretty confident and pretty happy with where my game was at. From what I’d been through and the year that I’d had, I thought that would be my year for being drafted. But unfortunately, I missed the boat on that one, which was hard.”

Following her selection in the inaugural Essendon leadership group, Hicks has been one of her side’s most reliable players as a key defender, bringing experience and efficiency to a fledgling backline while often taking the number one forward.

“I’m really big on leading by example. Because I’ve come from such a tough background in terms of injury, I do spend a lot of time on the importance of strength and conditioning, so I lead the girls in a way where you need to look after your body.

“I’m not a loud or outspoken person but I tend to speak when necessary…I think what I take out of being a leader is trying to listen to what everyone has to say and how everyone’s feeling and then try to mirror that where I can to get that message across to a broader range of girls.”

Hicks admits to having several frank discussions with those close to her about gambling her safety by returning to a game that had cut her body no favours.

The answer is simple.

“Love. All I wanted to do was play footy.”

6 Likes
Our senior team is butter soft
next page →