2 weeks in and finally it is time for the game of the century! The best team in the Nation, #1 Alabama goes up against the only team to beat them during their national title run last year Texas A&M (#6). I am an aggie so the following will be a bit biased.

Alabama is a better football team but A&M will have the best 2 football players on the field in Mike Evans and Johnny Manziel.

It is going to be a ripper. A&M should have had an advantage having played in weeks 1 and 2 while Bama only played in week 1 and looked very scrappy on Offence. However the aggies had 7 starters suspended on D for game 1 and 5 for game 2 they have plenty of problems to iron out as well.

Bama was horrible offensively in the first game 2 weeks ago relying on two special team Td's and a pick 6 on their to a 35-10 win. McCarron threw for 110 yards, a career low. But with their RB's, Amari Cooper and Christon Jones they could flick the switch at any moment. A&M has battled against the run, albeit option based runs in their first 2 games so look for TJ Yeldon to have a big game. The ags will need to force some punts and snag a turnover on D to have any chance of winning.

Johnny Manziel was lights out in week 2 throwing for over 400 yards and refusing to take off and run. Expect the scramble to come back into play this week. If the aggie offense can post some back to back TD's early they should be able to score enough points to hold off.

It is going to be a ripper and for mine comes down to Special Teams. Drew Kaser has been super impressive early including a 76 yard punt against Rice. If he can put the ball back inside the 20 or force fair catches and kicker Bertolet force TB's on kick offs the Aggies can take away Christon Jones takeback ability (he became 1st bama player ever in week 1 to return a punt and a kick off for TD's)

Funny how it works only one other match up of ranked teams this week with 16 UCLA taking on 23 Nebraska. All eyes will be on College Station, Texas! Gig em!

Kaser's punt is second longest for the year, longest so far goes to Aussie Tom Hornsey (Memphis) who unleashed a 79yard monster in their season opening game last weekend. Hornsey was the face of Memphis's media guide this season and is a serious NFL draft prospect. Number three on the list is another Aussie, Cayle Chapman-Brown. He crushed a 73yd bomb last week too against Minnesota (whose punter is an Aussie too!)

Manziel is boss though, and he is going to cause nightmares for Bama. I'm gonna go with A&M too.
If you want to see the money in college football, check out Oregon's new TRAINING facilities. Put's flight plan (and every pro team in the world) to shame.
http://www.youtube.com/watch?v=-xSlBX32jx0

The money is amazing. I was an athlete at A&M a few years ago and was back last march training and was amazed at how the facilities for football had grown in just two years. The Oregon stuff, essentially paid for by Nike is amazing. We’ve got new weight rooms, dining and study hall for football and renovating kyle field these next two of seasons at a cost of $489 million. amazing what these schools are spending.

Nice stat #5!he a mate of yours? Few Aussies pointing now mate if mine is the new punter at lsu replacing former marecellin boy brad wing.

Manziel is boss though, and he is going to cause nightmares for Bama. I'm gonna go with A&M too.
If you want to see the money in college football, check out Oregon's new TRAINING facilities. Put's flight plan (and every pro team in the world) to shame.
http://www.youtube.com/watch?v=-xSlBX32jx0

Those facilities are eye-popping. If I remember correctly, Phil Knight (head of Nike) went to Oregon and now pours all sorts of money into the University (mainly the sports department, I think).

WIth facilities like that, it's easy to see why Chip Kelly had to be prised away. As an Eagles fan, I'm glad that he was.

Nike was founded at Oregon as well kelfie so it will always he well supported by them. Knight himself pours money into lots of Oregon schools not sure if he actually went to Oregon.

Nike was founded at Oregon as well kelfie so it will always he well supported by them. Knight himself pours money into lots of Oregon schools not sure if he actually went to Oregon.

According to Forbes, he has donated over $300 million to Oregon over the last 20 years.

They may have lost Chip Kelly, but they gained a $68 million recruiting tool in the form of a new Football Performance Center.

Just imagine how good long-time football doormat Indiana University would have been if Phil Knight hailed from the Hoosier state and attended college at I.U.

Of course, Phil Knight is the Co-Founder and and Chairman of Nike, Inc who hails from Oregon and was a student-athlete at the University of Oregon.

Mr. Knight‘s impact on Oregon athletics and the university at-large is well-documented.  He and his wife have donated over $300 million to the UO and to the athletic department over the past 20 years.

- His first philanthropic venture was helping to fund the $27 million renovation of the library in 1994;

- And more recently, the $42 million athlete tutoring center and the $100 million endowment of the Legacy Fund to insure the bonds taken out on Matthew Knight Arena.

And now, the $68 million Football Performance Center (read this piece for stories and photos showcasing the new facility).

With Coach Chip Kelly off to the NFL, who knows whether the Ducks can keep up the pace set by their former coach who led Oregon to a 46-7 record over 4 seasons in Eugene.

But in the NCAA where schools still cannot legally pay their student-athletes, having a brand new facility with spacious individualized player lockers, plush offices for coaches, a two-story weight room, two practice fields, a barber shop, pool tables, and more isn‘t a bad strategy to keep the pipeline of top college football players flowing to the Northwest.

It makes the Flight Plan seem like a drop in the ocean. Maybe we could ask him for some change.

I'm also looking forward to Alabama v Texas A&M - it should be a great game.

Nike's co-founder was Bill Bowerman, who was the Oregon athletics coach for decades. He was the guy who made the original waffle trainers by literally putting rubber into a waffle iron.

If you ever see the movie "Without Limits", which is about the middle-distance runner Steve Prefontaine, they have this as an ongoing side plot to the film.

Seen that movie more than a few time! There’s another movie produced at same time that Phil knight is mentioned in. Forget the name but their was a falling it between the two parties.

Yeah, there was another movie made almost the exact same time and covering roughly the same period in his life. I think they were based on two different biographical accounts which didn't necessarily line up.

Back on topic eh! Any thoughts on the season and its outcomes. Keeping in mind it never turns out how you expect...except for an SEC team lifting the crystal ball

This is why College FBall is better than NFL.

I love this time of year, College Football on most of the weekend, was up at 6 this morning watching Oregon.

I love this time of year, College Football on most of the weekend, was up at 6 this morning watching Oregon.

Mariota destroyed Tennessee. 460 yards and 4 TD, plus is rushed one. Oregon is one of my favourite teams to watch.

Boy our program has come a long way in a very short time. Very proud of that effort today. That D will be pretty good in a year or 2. Just no where near deep enough right now and a lot of true frosh playing big minutes.

Go Noles!!! Can’t wait til 6 jan. so excited!!! FSU has been dominant all year with their QB Jameis Winston winning the Heisman Trophy as a 19 year old freshman. He will dominate college football and go on to be an NFL star. Chop! 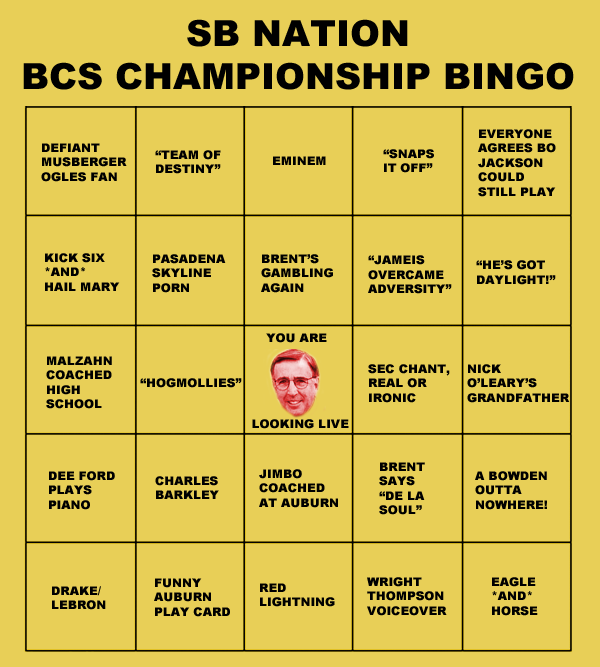 Florida State come from behind to beat Auburn 34-31.