Every defence ever is pathetic against Kelce.

Things turn quickly in the NFL. THE NFC east is a good redemption story A very one sided affair.

Imagine if the 49ners had a Franchise QB.

This is not meant as a shot but Jimmy G, he is a solid NFL QB, but he ain’t no Mahomes or Allen.

If the surrounding cast is good enough, they can win behind Jimmy G.
Joe Flacco, Trent Dilfer, and Mark Rypien won superbowls being solid NFL QBs.

yeah lads just stop that big fella from getting it

Only the Chiefs scare me. 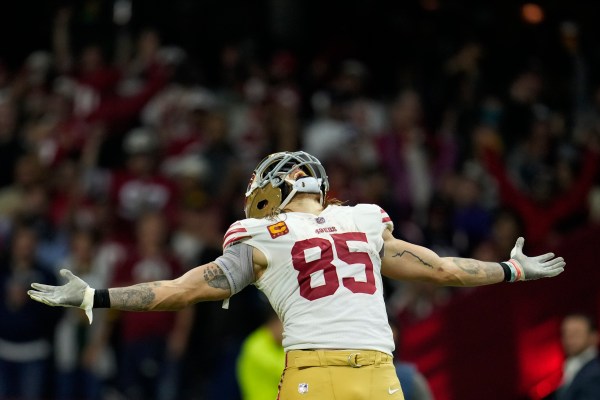 Kurtenbach: The Niners showed their best in Mexico City. It’s the NFC’s best

The Niners’ nearly perfect game against the Cardinals put them back atop the NFC West.

Nobody in the NFC should.

As much as I dislike the Patriots, I don’t like the way they called Hunter Henry’s catch an incomplete pass because of a small bobble even though he never lost grip on the ball.

A bobble is always going to be called incomplete.

As much as I dislike the Patriots, I don’t like the way they called Hunter Henry’s catch an incomplete pass because of a small bobble even though he never lost grip on the ball.

It also hit the ground, it was a clear no catch.

Yeah, I know, it was a great catch and the ‘bobble’ was the ball shifting in his hand. I just like to see those sorts of plays rewarded.

Nah, I reckon his hand was under it at that time. It was the shift of the ball in his hand when he rolled over that killed it.

I’m not denying the call, just think it’s a shame.

I can understand your point of view, but I do like the NFL’s clear cut rule on these things.
A bobble as the ball hits the ground, it’s incomplete.
No bobble but the ball can touch the ground after the completion and it’s a complete pass.

Justin Jefferson has an amazing ability to catch the ball and hold onto it in extreme situations.

Very tight win to the Vikings

Pats running into the punter on that last TD drive of the Vikes very expensive.