Bells is breaking almost perfectly today. Mick Fanning has lost his heat, but has another shot through the wildcard heats.

The girls are at it ATM, Carissa Moore carving, & up against Steph. It’s a great watch for those interested.

I love that these events are steamed live from all over the world these days, and for free.

If you want to check it out… 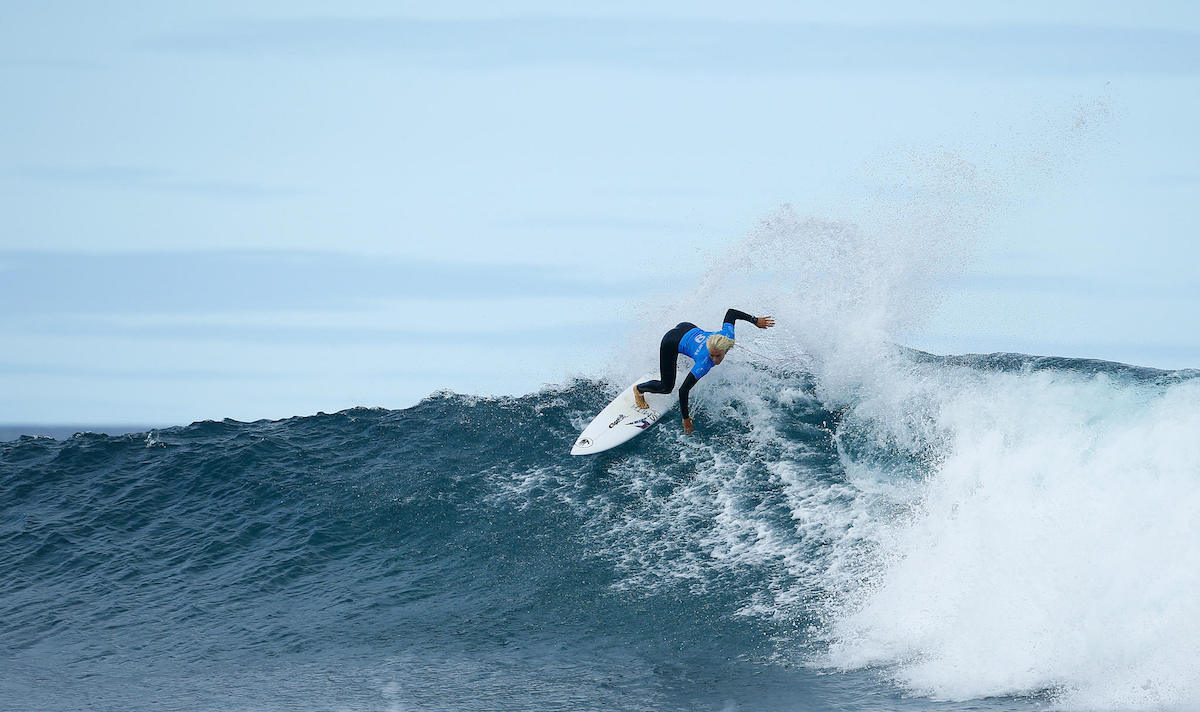 Was down there Sundee, great waves and action!

How long have prostitutes been surfing at bells, and why didn’t anyone tell me before?

One of the freakiest aerials you’ll ever see.

How the Fark does JJ Florence keep the board under his feet in this 360 manoeuvre?? In the slo mo, you can see the onshore Sou Wester nearly blow it out from under him, yet he adjusts, and keeps it there. Just incredible.

Also, congrats to Jordy Smith, the 1st Seth Efrikin to win the Golden bell ever.

The speed of his reactions is astounding: the little adjustment of line to get the proper launch, and using his toes to catch the board when it threatens to get away.

Love Teahupo’o. It’s one to just not miss every year.

Congrats to Julian, it’s great to see him back in form. Thought he would be Australia’s next world champion a while back, … maybe it’s still in the offing for him. Great bloke too.

By Anthony Pancia
Updated about 8 hours ago

Wilson was greeted by good mate Mick Fanning after winning the final and said the final had left him “worn out”.

“It’s so special to win and it was such a good final,” an emotional Wilson said in a post heat interview.

“I’m speechless — I’m not going to cry but I feel like crying. I’m just so happy to win again.”
Wilson trailed for much of the heat but posted two nine point-plus-rides to peg back the lead and eventually take the win, just the third in his career on the elite surfing circuit and first since winning the prestigious Pipeline Masters in 2014.

The win also sees the popular Australian move from eighth to fifth on the tour rankings behind fellow Australia’s Owen Wright and Matt Wilkinson and technically into contention for the world title.

"I’ve had a pretty steady start to the year and I’m so happy to be in the mix now. With so many events left, I’m really looking forward to it.

“I was already enjoying myself on tour and even more so now, I cannot wait for the rest of the year.” Ironically, Wilson’s last win in 2014 was over Medina in the final event of the season and one which would hand the Brazilian his world title however Wilson again came out on top in a previous final in Portugal in 2012.

Despite having a lacklustre year himself, Medina also moves into title contention as the tour moves to the United States, France and Portugal-all venues where he has either won or placed.

“Julian has been surfing really well the whole event so good job to him,” Medina said.

“It feels good to be back in the game now so I am happy.”

Medina eliminated Owen Wright in their quarterfinal match-up while Matt Wilkinson relinquishes his ratings lead after losing his round five heat against Brazil’s Wiggoly Dantos.

Really thought it was finally hers this year, … what a fkn bummer.

Well Done Steph. May you roll on to double figures.

Stephanie Gilmore has won the world surfing title for the seventh time in her career, equalling the record of wave great Layne Beachley. Gilmore clinched the record-equalling title in the season-ending Maui Pro event after American Lakey Peterson made an early exit.

“This is just, I don’t know, I wasn’t expecting this right now, I just went home to chill out and come back and get ready for battle,” Gilmore said.

“That was intense, but, oh my gosh, I can’t believe it, it’s so cool,” Gilmore said, failing to hold back the tears. "Surfing means everything to me, it’s given me everything. I’ll never forget being a young girl and just surfing all day long, it’s all I could think about.

“It’s still my first love and it gives me so much joy. It challenges you and it’s just everything, so to come here today and to be able to achieve this is so, so special. Surfing is the best, it really is.”

Gilmore paid credit to Beachley, citing her as an inspiration to female surfers.

“It is an honour to sit beside you, Layne. To equal you is such an honour. Thank you so much, thanks for setting the standard.”

At 30, Gilmore is likely to surpass Beachley as the most successful women’s surfer but quickly played down suggestions that Kelly Slater’s record haul of 11 world titles could be a target.

“I hate that question,” she said when asked if the American legend’s mark was in jeopardy.

Queenslander Gilmore advanced to the third round earlier on Monday with a dominant round one heat win.

She dispatched American Sage Erickson and Alana Blanchard, with the Hawaiian later returning to beat Peterson in round two and seal Gilmore’s latest success.