I thought I would try and repay for all the training reports that I have read by outlining a few points from today’s captains run at the SCG.

Good one mate. Well done, & thanks.

Some nice background there magilla.
Thanks for the insights.

I was wrapt to get Harvs sign the front sash of my old woollen VFL jumper 30 years after he signed the no. 38 on the back!!
He was mildy chuffed that I still had kept it
I’m gonna get it framed cos I sure can’t squeeze into it any more
I said to him on the quiet “it’s gonna get ugly tomorrow eh Harvs”
His reply “it will for fkn Sydney”
Gott love his passion eh

Briefly (from memory)
Harvs - really happy with how the backline is holding up under the pressure
Made lot of mention of Hartley & says we’ve got a good one there. He asked who we should put on Buddy tomorrow “we all yelled out - everyone!”
I think he’s got Hartley in mind
Says we will love Francis when he gets a run at it
Long - still being developed but says he’ll play firsts this year some time
Eades - is a ripper in front of goals with good pace to burn. He’ll get a run this year

Sheeds - usual Sheeds he gave us some insight to the last 2 mins of the 96 prelim & who should’ve intercepted Locketts mark. He didn’t blame Olerenshaw
He was super positive about the future and rightly so said this season will stand the club in good stead despite the results
Mentioned that we should expect better up forward tomorrow & selections have been based on Swand only tall KPD is Grundy
Lots of banter between him / Harvs & the supporters you wouldn’t have known we’ve only won one game
Said he was dancing all the way home after the Melbourne game & was so proud of the club & supporters that day
Blamed Anzac Day on stage fright
It’s good to have Sheeds back

Sheeds - usual Sheeds he gave us some insight to the last 2 mins of the 96 prelim & who should've intercepted Locketts mark. He didn't blame Olerenshaw

Blumfield with a couple of minutes left was the key moment.

Nothing said about Dunkley in the 96 prelim? I was there, watching him smash Hird’s face into the ground. Later he said “nothing in it”. Anyway, Carey fixed up Dunkley the next week. I was there for that too, barracked for Norf all day. .

Did you both make it to the photo op @magillacutty & @wasaharvsfanasakid ?

Thanks for the reports.

Thanks to all the fans that came out to training! Hope you enjoyed the chat with @Kevin_Sheedy Harvs + @XCampbell79 https://t.co/AtqzkFJur1 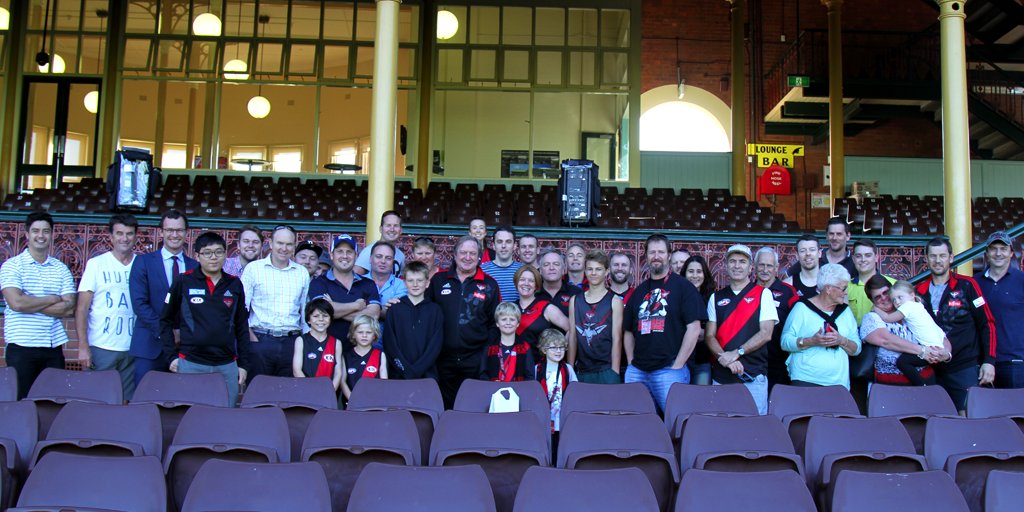 “It will for fkn Sydney…”

"It will for fkn Sydney..." </blockquote

Did you both make it to the photo op @magillacutty & @wasaharvsfanasakid ?

Thanks for the reports.

Nothing said about Dunkley in the 96 prelim? I was there, watching him smash Hird's face into the ground. Later he said "nothing in it". Anyway, Carey fixed up Dunkley the next week. I was there for that too, barracked for Norf all day. .

Funniest thing about that home crowd that night - if you ever watch a replay you’ll notice virtually no Swans colours
It was pretty much the first night the bandwagon got loaded up with first time “supporters” and they’ve been the most ignorant bunch of cocksmokers ever since !!

Thanks for the report/s Magilla and wasa, sounds like it was a great afternoon.

It was transparent cheating. Closing minutes of the game, and all that lunk Dunkley had to do was hold the best player in the game to the ground for an extended period (any eye gouging was a bonus). It wasn’t like the Sydney umps were going to give Hird a free.

DJR: Umps claimed not to have seen it - umpteen video replays later, on TV, forced a report, Dunkley got an injunction to play next week - but not that he played - would have been worst on ground.

Thanks for the report guys. Good to read insights of what we might be able to expect tomorrow.

Hoping one of those is Hurley.