Clarko could be an absolute messiah but he is taking over the bottom team who should be rebuilding but have only produced one rising star nomination over the past two years and he has moved to Port Adelaide. It is a long way back and that is if thing go smoothly.

The backline is trash. I think Logue will come straight in and probably have to pick up a key position which doesnt play to his strengths but they are light back there. McKay is a quality player and just needs a solid run from his body. Aidan Corr still exists and is at North which is lucky because he probably doesnt get a game anywhere else. McDonald and maybe Tarryn Thomas will take care of the half back stuff. Its not inspiring.

The midfield is coming along. LDU and Simpkin are two players who can hold their heads up after last season and I think LDU may be their best player but the end of this year. Thomas will be looking for midfield minutes and they need Cunnington to find the fountain of youth. Tucker and Scott are solid, they could use Powell and Phillips turning into something like what was expected when drafted.

The forward line is an abomination. Nick Larkey looked ok in patches. Zurhaar threatens to be a good player although his best work is still done on social media. Sheezel will come straight in. Stephenson showed true colours as a lazy selfish turd and then you have Callum Coleman-Jones who is probably in their best 22.

Todd Goldstein is their best ruck although at times last year Xerri looked like he could play. Ruck certainly isnt their most pressing need (unless you consider Goldstein being really old as a concern). The coach is proven at Hawthorn and comes heree as a softer, cuddlier version of himself although also as a man who needs to fight of legacy destroying racist allegations.

All in all, its a crap list, being driven by a man who knows how to coach. It has however been a long time since he had to start from scratch without the gifts he got early doors at Hawthorn or the benefit of having a strong list when two new teams destroyed drafts for everyone else. I dont see a massive improvement in their list but they can’t get much worse. They will be bottom two this year.

Will be a steaming turd again.

They’ll pull the odd one out of the hat like they did against Richmond last season but it’ll be ugly.

They will be poor again this year and probably next but I do like some of their youth and I can see them being around the mark in a couple of years if they can hold on to them. I’m more bullish on Norf than I am others

Zurhaar threatens to be a good player although his best work is still done on social media.

Lol! Would be a brave pundit that puts them anywhere outside the bottom 4. The media beatup if they win early on will be sickening. Clarko the messiah…

Bottom 2 for sure.
I’m not bullish on their future.
They have a decent midfield coming through, but their forward line and backline are a shambles.
In the forward line they have Larkey and no one. That’s it. They have to play Goldstein there and he still plays his best as ruckman. I actually think Logue plays forward. I thought he played his best footy last year as a forward.
Their small forwards are their strength. Sheezel, Zurhaar and Stephenson are good forwards who can spend some time in the middle. Curtis Taylor is okay but I’m not sure where he fits in here.
They have no pressure forward. None. Weird.
In the backline they have Ben McKay. That’s about it. Corr is a lockdown defender so he won’t be flashy and Young is a third man up type defender. That’s it.
They have very little reliable depth as key forwards and key back men.
McDonald and Scott are good players, but they aren’t there for their defence.

This list is farking deplorable. If we ever get rid of Dodoro, he’d be an upgrade on whoever is handling the North Melbourne list.

Their pickups are absolutely laughable.
Griffin Logue, Darcy Tucker and Daniel Howe have been toiling with seconds footy for the last three years or from non finals teams. They aren’t going to provide much value.
If they were looking for players from a winning culture, they certainly have a very different thought on what a successful team looks like.

This team will be bottom four for a few years yet.
They just don’t have the tall forwards or backline even vaguely planned out for.

The forward line is an abomination.

I don’t quite agree with this. Sure some are still developing as players but I reckon they have a number of dangerous and X factor players up there. It’s certainly a lot better than their backline IMO. Although Logue may help a bit back there.

What they do lack though right now is a recognised and established 2nd tall forward.

I’m a believer in Comben from what I’ve seen from him in the 2’s when he’s been on the comeback trail from injuries (which to this point in his career, has been just about the entire time… come to think of it, he fits the profile of most young EFC talls in that regard) but he needs to come in and prove he can stay fit and show what he’s made of or else Larkey is still the only bonafide key forward. Not too dissimilar to Peter Wright in that sense.

Paul Curtis was an enormous presence for a first year player last season. He has the body and explosiveness of a player far beyond his years. There were quarters and halves of games last year, in an ordinary side, where he tore it shreds. He’ll be able to sustain this a little longer this year. He’s going to be a heck of a player.

Much rests on what sort of mindset Tarryn Thomas displays. He’d spend plenty of time forward you’d think. Last year he was dreadful and not there mentally but the year before he looked like one of the brightest young talents in the comp.

Dissapointed I couldn’t fit George Wardlaw into the team - are Lachie Young and Curtis Taylor any good?

North seem to have a lot of inside mid coverage already with Powell, Phillips and Ziebell on the bench.

Where will North finish. Likely Bottom 4, will see if Clako can Polish a turd.

For North will be interesting what structure and role players clarko brings in.

Lachie Young no, Curtis Taylor could be a handy player.

I am keeping my eyes and fingers crossed that they are without a coach before too long. More later.

Extraordinary if that plays out.

Will be crap until the massive draft concessions they get as a result of becoming the Tassie Devils begin maturing in about 5-7 years and the supporter formerly known as the North Melbourne supporter comes out of the woodwork to support them.

It’s time to sacko the clakko
nobody can redacto the facto
that Alo is a bona fido slimo. 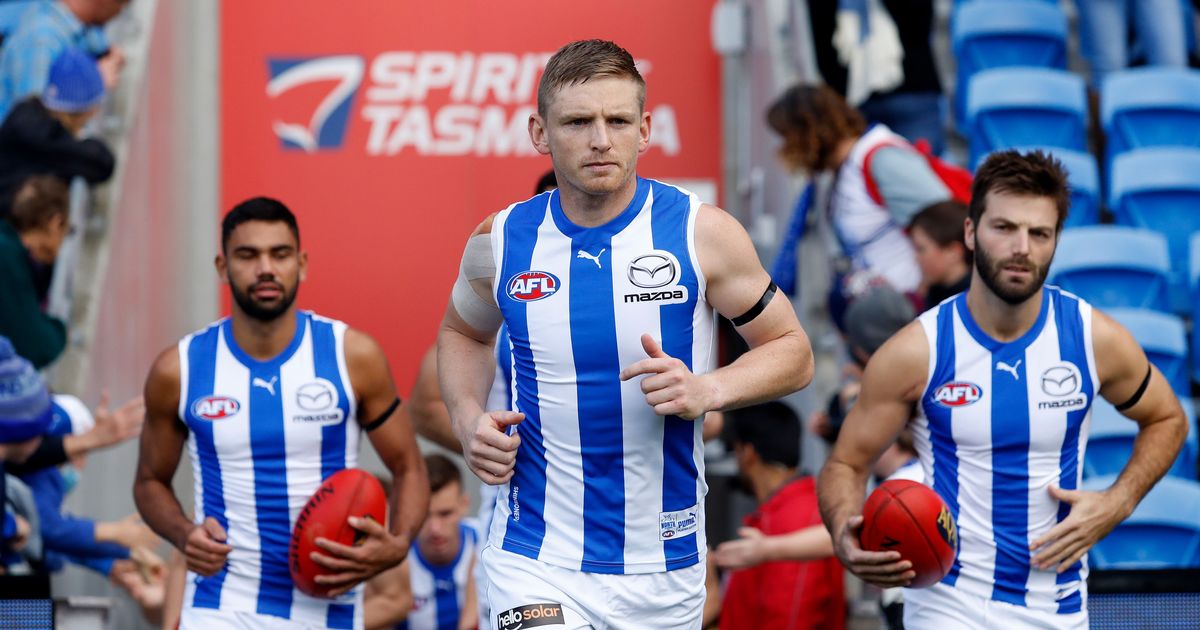 Kangaroos skipper steps down after six seasons at the helm

First Pendlebury and now Ziebell. Surely no excuse for Heppell to follow

They’ll win 5 or 6 games in 2023, a considerable improvement on the last two years but still bottom 4 material.

Almost certain, in my opinion, that one of those wins will be against us.