Speculation as we head to the filth

Pies colleague of mine seems to think he’s done. have no official confirmation.

This match up is interesting.
Hadn’t considered it.
Maybe a touch too short for him, but Saad does compete well in the air.

I was thinking Ridley for Stephenson, and it then gives us another quality distributor off half back.
If Riddles comes IN for 1 of Dea/Ambrose, we pick up a little more speed and footskills.

But not as good as Matt “Big” Deal

Treloar and then Dunn for season ending injuries in successive weeks is brutal. They do have Moore and Reid coming back from injury soon though IIRC

Any thoughts of trading Moore to free up cash for Lynch might be on hold now also.

Moore and Reid still not fit and shouldn’t play against us though I think?

Their injury list is massive but it hasn’t affected their output. Essendon need to bring 4 quarter pressure. Win this and supporters can legitimately dream of finals. Whether they get to play finals is another story but hope will be high. And that hope/vibe will likely rub off on players as they chalk up (

Zero Hanger reporting the ACL news now as well for Dunn. Big out for them 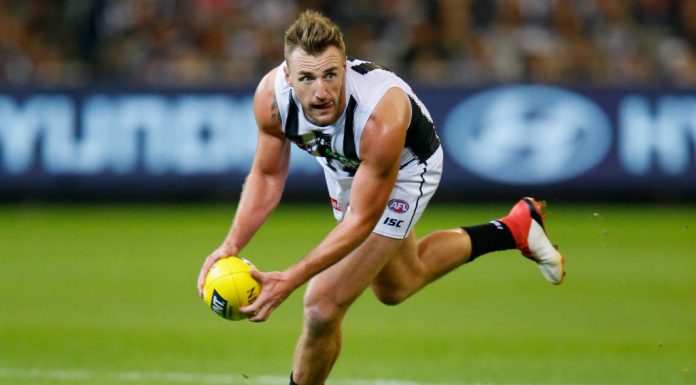 The Pies just can't take a trick with injuries this season.

Win this and supporters can legitimately dream of finals.

Not really. Win our next 5 and I might agree with you…*

Please note: I said, “supporters can dream” of finals. Not suggesting for one moment it will happen. Hell, some have been doing so for weeks now!

Please note: I said, “supporters can dream” of finals. Not suggesting for one moment it will happen. Hell, some have been doing so for weeks now!

We will be too slow with Hurley, Ambrose and Goddard in the backline. Their kids and forwards are slippery little suckers.

Possibly In Francis or Ridley Out Ambrose

We have to be careful about the pace of our backline this week. Pies are fast and agile up forward and don’t bomb in long often.

I’d be looking to add another small defender for a tall. Pity Redman isn’t available. Or Francis, even though he is big he is pretty quick.

The best change Essendon could make is this:

Commentators for the game seemed to think Pies took him off as a precaution to make sure he’d be right for the next game.

Reported as a suspected ACL.

collingwood will watch yesterday’s replay and won’t bomb it long going forward. they’ll play like North did in the second half and want to slow it all down.

they will try and hit up leading targets inside 50, if the ball hits the ground, they’ll try and get crumbing goals like North did yesterday.

I look forward to seeing who Collingwood name this week, maybe Ambrose doesnt have a matchup