The Future, wombats, Is Here!

A mainstay of popular science fiction and futurist conventions since the 1920s, the personal jetpack will move a step closer to reality on Tuesday when the New Zealand-based Martin Aircraft Company lists on the Australian stock exchange.

Inventor Glenn Martin will ring the listing bell at the exchange, marking a milestone in an ambition to successfully commercialise the personal jetpack, a plan hatched over a beer as a student in the early 80s and developed over decades in a Christchurch garage.

Martin Aircraft is boasting that it can offer “the world’s first practical jetpack able to be flown by a pilot or via remote control”. The company is already taking orders for the device, to be manufactured in Christchurch, and says it will be commercially available by 2017.

While the company expects the early adopters of the product to be emergency response organisations, it hopes to soon begin selling to recreational users.

The listing heralded the arrival of “a disruptive technology that is going to change the face of light aviation”, said Peter Croker, the chief executive of Martin Aircraft.

“This is a bit like when the helicopter first came in, and everyone said it would never work, that it only flew for 10 minutes, that it was disastrous in some respects.

“But now you look at the helicopter around the world, and that’s changed something – we’re going to do exactly the same.”

Propelled by a V4 engine, the Martin Aircraft machine is considerably more cumbersome than the rocket-fired rucksack of Buck Rogers, with the pilot attaching to the jetpack, rather than the other way around.

It is nevertheless a vastly more elegant model than the 2010 prototype, which Time magazine, naming it among the top inventions of that year, said looked like the work of someone who had “welded two enormous leaf blowers together and thrown on a harness”.

The Martin Aircraft jetpack is expected to retail initially at around US$200,000 (£130,000) to specialised first-responder groups, with a view to reducing that to $150,000 for individual would-be jetpack pilots as economies of scale kick in. It was not fanciful to imagine the jetpack being used, said Croker, as a commuter vehicle.

“As an aviator myself, I absolutely see this as the motorbike of the skies of the future, once the regulatory authorities are happy with it.”

Its P12 prototype gained certification for manned flight as a microlight aircraft from New Zealand aviation authorities in 2013. “We’ll be able to translate our registration to other countries,” said Croker.

“We do recognise that some other countries may require more due diligence than others. What we’ve done is put in place a team who will liaise with regulatory authorities in the customers’ countries so that we have a smooth transition with the aircraft to that particular country.”

The Martin Aircraft invention promises a dramatic advance from other prototypes, said Croker. Devices such as the rocket belt, most famously demonstrated at the 1984 Los Angeles Olympic opening ceremony, fly for as long as 75 seconds, and depend on hydrogen peroxide.

But the Martin model could theoretically travel for half an hour, after being filled up at a conventional petrol station. It could travel as high as 3,000ft, at 74km/hour, and lift up to 120kg, Croker said.

Among the jetpack’s features is a parachute that would open from as low as eight metres above ground, making it – according to Martin – “the safest aircraft there is around”.

The public listing comes after a commitment from the Hong Kong based KuangChi Science – whose existing projects include working with meta-materials such as the so-called “invisibility cloak” – to invest up to A$50m (£25m) in the company over three years, which would ultimately see it taking a controlling stake. The offer price of 40 cents values Martin Aircraft at just shy of A$100m.

The stock market launch takes place four years to the week since Christchurch was struck by a violent earthquake that killed 185 people and reduced much of the city to rubble.

The company was rocked by both the earthquake and the global financial crisis. “It’s a great testament to the interest of people around the world in the jetpack that we were able to survive without too much difficulty,” said Croker.
How it works

Jetpack engines typically propel the user skywards by taking in air, mixing it with fuel and igniting it to produce a high pressure blast that is passed through a narrow nozzle.

The problem is that as you add more fuel to the rocket belt, it very quickly becomes too heavy to fly, meaning most jetpacks have a limit of a few minutes flight time, even with the most efficient fuel mix.

One solution is to attach the jetpack to a flexible hose tethered to a fuel supply on the ground – but most would agree this slightly defeats the point.

The Martin technology gets around the problem by using a pair of fans to generate lift, rather than jet engines. The carbon Kevlar fans, positioned on each side of the pilot, are wider at the inlet than the outlet, funnelling air through at high speed.

The fans are petrol-powered, meaning the pack can be refilled at a petrol station, and the company claims they allow a flight time of 30 minutes.

The downside is that the pack is larger and more cumbersome than the rucksack-style design normally envisioned. Hannah Devlin

Still waiting for my hover board, and no not that oversized skateboard with fans underneath that Tony Hawke rode.

Can’t lie. Was hoping that when I saw the thread title, I would see something like this:

I can’t even fly a drone without CASA referring me to lawyers to interpret their rules and we expect to see people flying around in jet packs. Will be banned here before it gets off the ground (so to speak).

Yearn for the warm yellow light of an old energy-hungry Edison incandescent light bulb? Find the white-blue glare of a modern LED bulb too harsh?

Quantum dots are about to change all of that.

These electronic crystals are so tiny that 10,000 of them span just the width of a human hair.

They are small enough to operate in the fascinating realm of physics called quantum mechanics, and possess unique optical qualities that could change everything from TV screens and phone displays to medical imaging and solar panels.

Even the humble light bulb is unlikely to escape their revolutionary clutches.

Shine a light
Quantum dots emit one specific color when light goes through them. The color can be finely tuned and is determined by their size.

Just a subtle tweak in the size of the particle can change its color right across the spectrum of the color wheel: “We can tune these dots to fluoresce at any color that a given application requires,” says Michael Edelman, CEO of UK-based Nanoco, a quantum dot manufacturer.

Applied to TVs, this technology has several advantages over traditional LCD panels, as the colors are more accurate and the images more vibrant.

On top of that, they are more energy efficient: “Quantum dots require a tiny amount of energy to operate,” Edelman told CNN.

“Whenever you have a material that gives off a very bright pure light with a tiny amount of energy, people start getting excited.”

Heavy metals
Whenever you have a material that gives off a very bright pure light with a tiny amount of energy, people start getting excited.

Display manufacturers are lapping up the technology as quantum dots can improve screen quality at a fraction of the cost of other display technologies, such as OLED.

But while they have been around for more than a decade, quantum dots have had a slow rate of adoption because they contain cadmium, a toxic heavy metal that faces stiff regulations in many parts of the world.

Edelman said Nanoco has spent more than $50 million and the better part of 15 years developing quantum dots that are not only free of heavy metals but can be produced in the kind of quantities that make it attractive for manufacturers.

“Any new material that comes out will have this problem,” he explained.

"Every year weird and wonderful things are produced in labs around the world. But you have to make enough of this stuff that companies like Samsung can get it in the quantities they need.

“And that was a key problem we solved.”

Extracting cadmium from the process, however, has changed the playing field.

Medical applications
Now that it can be mass-produced without heavy metals, the material is safe for medical diagnostics as well.

Doctors have already worked with quantum dots to illuminate molecules that can bind themselves to cancer tumors, allowing the surgeon to easily distinguish the healthy from the diseased to tissue.

“It’s very rare that you see a material that is a true platform technology, meaning the same material can be used in cancer imaging, to make TVs, in security inks and in solar cells. That’s unusual,” says Edelman.

Lighting the way forward
At the moment the display industry has shown the greatest interest in the quantum dot technology, but the lighting industry and the medical diagnostic industry are the next in line.

One of the greatest advantages to any industry from quantum dots is that they take 30% less energy to produce the same amount of light. Used in mobile phone displays, quantum dots stand to vastly improve battery life.

And as for the old incandescent light bulb, quantum dots could bring that old yellow-tinged glow back to living rooms around the world.

“We can tune quantum dots to make that old Thomas Edison glow we all know and love,” Edelman said. 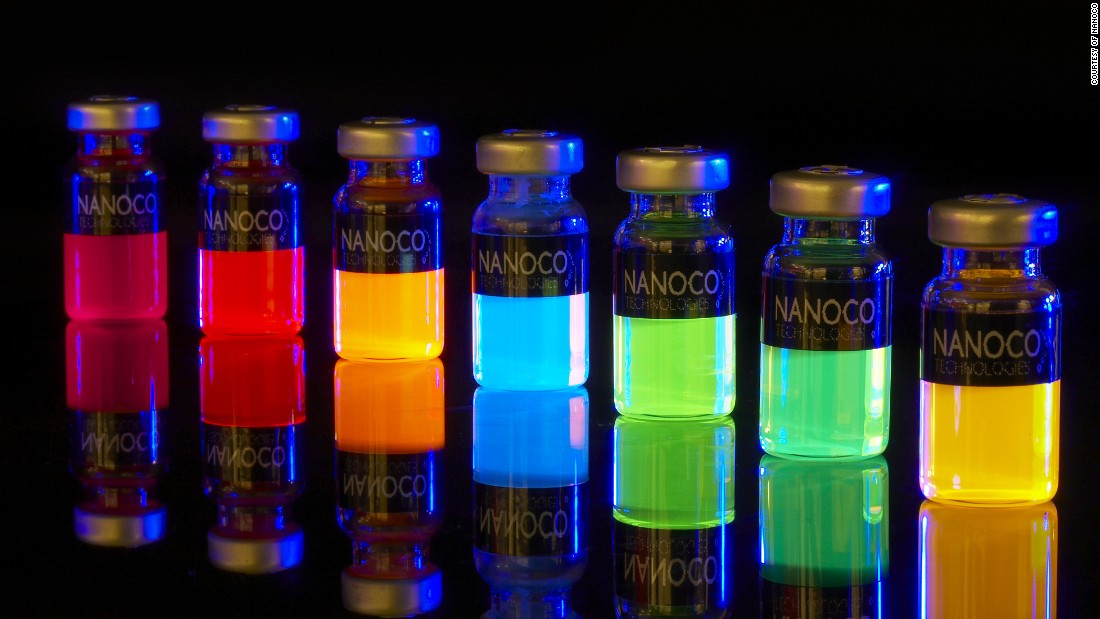 Why quantum dots are taking over your TV - CNN

They're too small to see, but their qualities aren't: quantum dots can change everything from TV and phone displays to medical imaging and solar panels.