After being peer pressured by @theDJR, here it is. No real comments to add, it’s straightforward this week.

Edit: as with last week, the margin is only roughly accurate. I’d also like to include the number of likes a post gets as a magnifier, but the json my little app uses to process the data doesn’t include likes.

Additional: graph showing the sentiment over time. Each bar is a three minute period so you can see mood swings as the game went along. Major patches of negativity are the start of the second quarter, and when Howlett had a couple of bad inside 50s.

Edit: also worth noting that the game actually starts around an hour into the life of the thread, so roughly that very small negative bar just before everything starts going mental. 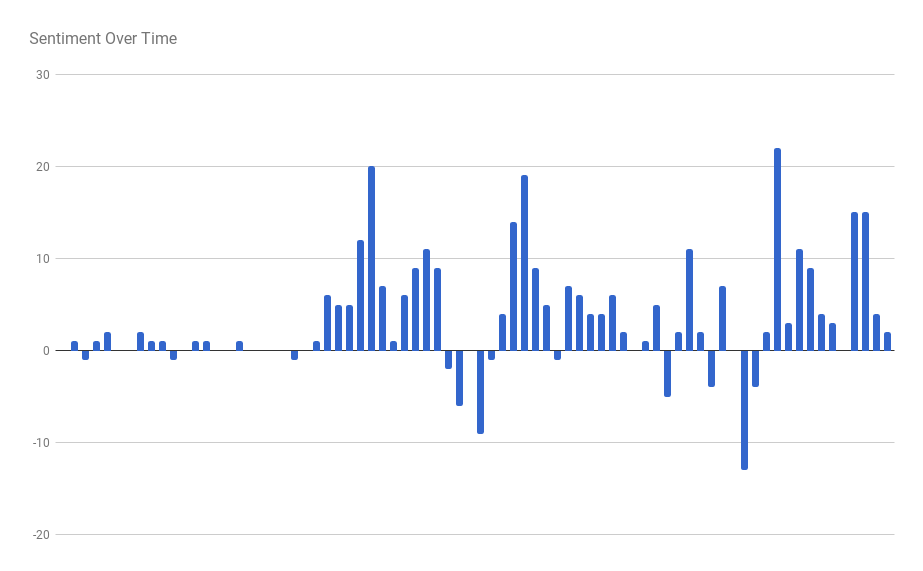 You changed the colours; my meta comments about “vertical red lines” are wrong!

I had to turn it into a google spreadsheet, so the graphs have a different style. I am covered in shame.

After being peer pressured by @theDJR, here it is

Just about peak nerdism, equivalent to being wedgied by the other guy jammed into the same locker

I don’t know how big a server farm you need for an AI that can understand an acrostic that says “HONOUR CONOR” is a positive comment, but I know I can’t afford it

I suppose a rolling average of the sentiment would probably be the best way to do that. Hmmm.

How would the AI possibly interpret “Connor BOG”?

I blame people for taking the negative options in my match thread OP poll.

Turns out those people are unmitigated fools. I’ll preface this with a thanks for putting your time in to this. It’s interesting. Genuinely.

Wouldn’t a “rolling average” end up in the positive? Not return to zero?

Unless Blitz truly is a pack of shittards.

Edit: Blitz won’t expand the image for me. Borked?

Rolling average was probably the wrong thing to call it, to be honest, it’s basically the sum of post sentiment over the last minute (so each post is reflected in the total score for a a minute), which is more of a rolling total. That means it will always end up at zero as posts drop out of range at the end of the game. An average over time would have ended up substantially in the positive for the game though, gloomers or not.

It would probably help if I could remember the names for all this kind of ■■■■ from first year stats, but it’s been a while.

Not sure why the image wouldn’t expand. It was originally an imgur link, but now it’s a blitz hosted image. Don’t know what the deal is with that.

Link is fixed now, all good.

What if you added all sentiments from the minute to the nett of the previous minutes and divided by total?

Or, you could do nothing, you’ve done a bit already.

Word cloud for the thread: Not sure where @anon71769209 asked but I think what we lose in angry posts after a win we gain in posts requesting a replay download link.

Word cloud for the thread: