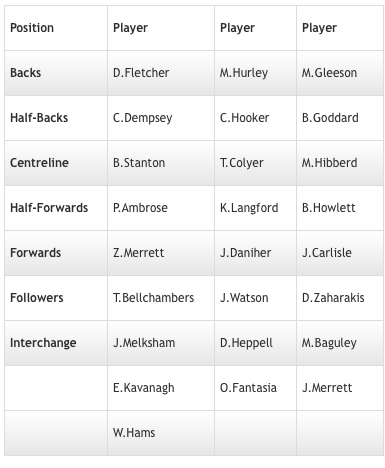 But… Which one will play?

langford listed as a HF on the team sheet on EFC website, so he could be a possible debutant

Whoever comes in from them will likely be the sub. Full game for Hams!

Langford named in the 18.

help bags melk won’t be outs, we need more run so the logical choice is hams.

it is a bit of a milestone

So one of Hams, Kav, J Merrett and Fantasia will be the sub.

So Langford in for Chapman.

Hams sub again is my bet.

So barring injuries, most likely is Langford for Chapman.
Can’t see any of Hep, Melk or Bags being left out. Which leaves Hams as sub again.
Not great for mine.

Hurley named in defense, I assume this means he’ll play forward this week?

I hope Hams gets a full game.

I hope Jerret gets a run.

Why won’t the club. Listen to Blitz