Born in 1899, how does she ever fill in one of those interwebs DOB thingies?
Bloody good innings though, many happy returns Emma. 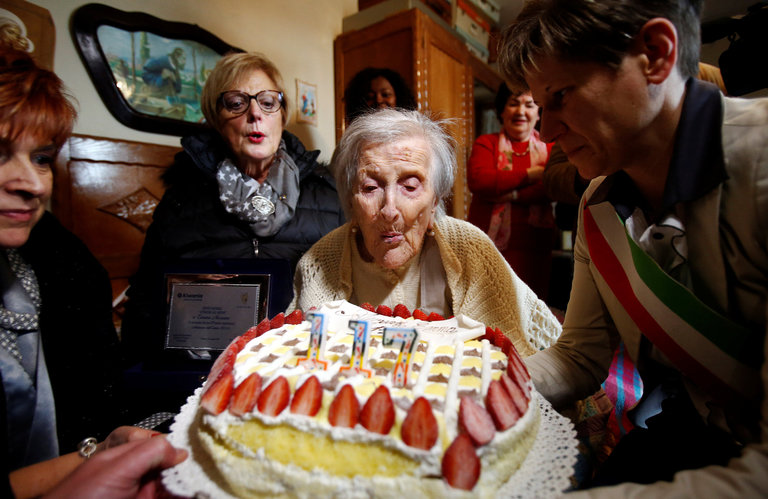 VERBANIA, Italy (Reuters) - Emma Morano, thought to be the world’s oldest person and the last to be born in the 1800s, celebrated her 117th birthday on Tuesday, still swearing by her diet of two raw eggs a day.

Morano was born in November 1899, four years before the Wright brothers first took to the air. Her life has spanned three centuries, two World Wars and over 90 Italian governments.

Friends, neighbors and her doctor gathered in her small apartment in the northern town of Verbania, on the shores of Lake Maggiore, to mark the latest milestone, presenting her with a large white birthday cake.

“My life wasn’t so nice,” she told Reuters TV as she sat in an armchair by her window, a white shawl over her shoulders. “I worked in a factory until I was 65, then that was that.”

In an interview with La Stampa newspaper five years ago she said her fiance had died in World War One and that she had then been forced to marry a man she did not love.

“‘Either you agree to marry me or I will kill you’,” Morano said, recalling his proposal. “I was 26. We got married.”

It was not a happy marriage. They had a boy in 1937, but the baby died after just six months and the following year Morano kicked out her abusive husband. “I separated from him in 1938. I think I was one of the first in Italy to do that.”

Morano lives alone and has outlived all her eight brothers and sisters, including one who died at 102. She has thrived despite an unorthodox, unbalanced diet.

“When I first knew her she used to eat three eggs a day. Two raw, and one fried. Today she has slowed down a bit, reducing the number to two some days because she says three can be too much,” her doctor Carlo Bava told Reuters TV.

“She has never eaten much fruit or vegetables. Her characteristic is that she always eats the same thing, every day, every week, every month and every year.”

“Two raw, and one fried”

Over 90 Italian governments in 117 years. Lol

"She has never eaten much fruit or vegetables.

So much for 5 servings a day

"She has never eaten much fruit or vegetables.

So much for 5 servings a day

Let’s hope it was drizzled with limoncello!

Too young for you?

Some sambuca in the espresso

Salmonella will get her

After the smoke cleared from blowing out the candles on yet another birthday cake, an enthusiastic younger relative had a question for her great, great, great etc grandmother. “Emma, what do you wish for”, Emma without a moment of pause replied “Pliz…I wish to die”

Salmonella will get her

Crazy Sal is not in to offing old broads.