Training at Tullamarine in muggy, overcast conditions with a variable breeze from the north.

The good news is that Francis joined in full training today and lasted the entire session. I saw Draper have his first kicks today - two on the small oval. He kicks pretty well with a straight leg and good follow through although from an aesthetic viewpoint perhaps a little stiffly. On a point of trivia the other day he used his soccer skills to play ‘keepy up’ with a football and achieved a pb of nine.

I can’t keep avoiding the Joe watch question. Joe is doing heaps of running along with Watson but no kicking, a pattern we have seen for some weeks. I don’t pretend to know why and part of it may be to increase his aerobic capacity and perhaps he is doing goal kicking away from the ground.

While it’s fair enough to be moderately concerned perhaps before you slit your wrists you should take a different perspective. People have continually told me how impressed they are with our depth this year. If the worst comes to the worst it may provide an opportunity to try some new forward combinations to replace Joe’s 2 plus goals a game. Move Hooker to chf, Francis to ff and Stewart third tall, second ruck.
What do you think?

While on the subject of Stewart he was very impressive today. Admittedly he kicked into the mark after taking a one hander over Hurley but later he slung Hurley aside to take a diving mark but most impressively of all in the match play he used his pace and sidestepped two defenders before hitting a target on his left with a right foot kick.

There was an eight to six drill today within the fifty metre arc where the eight attackers had to make space and see how many targets they could hit within a forty second time limit. The worst was eight and the best was eighteen. I mention this drill because it gives an insight to the programme to improve skills.

With this drill and some of the others it seems to,me they are looking for three things:

Practise and self criticism will improve the first two goals but it is the talking that really lifts the overall functioning as a team and keep turnovers to a minimum. As a player marks teammates should be screaming at the player where to kick it to next. Although they were working on this a lot of the talk was coming from the coaches and not enough from the players during the course of the session. However the talk must be useful e.g. One of the coaches yelled “fantastic, great skill level” despite the fact that Stanton had dropped two marks.

Karma Bomber whose photos will appear later notes how much we have been missing Myers who is training very well and he also points to Jake Long’s improved fitness - he is keeping up with people like Zaka right to the end of the session.

I haven’t written much about the value of the venue for some time but consider this. Crow and the fitness staff are located up on the balcony with the computers and in communication with the trainers. The players were split into two groups on the TWO ovals for ball movement work, both sessions being timed precisely from on high. Two ovals is a great advantage and leads to very professional sessions.

Hurley went to ground after taking a heavy knock to the ribs and Doc Reid raced out (as fast as the good doctor can race) but he was mainly winded and went back to full training. I seem to get a question about Morgan every session from someone who may be a relative of his. He trained well today and did a nice running spoil on Eades and there were calls of “fantastic Morgo” and “outstanding”. Zac Merret was in everything today and Colyer’s pace showed out to advantage while Fanta was busy around goals and Hooker kicked three at full forward with some good leading and one nice long shot with a tricky breeze.

I continue to be impressed with McKenna’s disposal which is pinpoint. At one point he did a handball on the backline then buttered up for a return handball receive before kicking a long pin point pass to Fantasia in the forward pocket. There was a tricky breeze, he had to kick over two defenders but drop the ball ,just inside the boundary line for Fantasia to mark. It was a brilliant kick and he is a strong contender for a running half back flank position although he must continue to work on his defensive skills and his decision making about when to run off an opponent.

A long, punishing session today and the younger players began to feel the effects towards the end of the second hour. in a repeat goal kicking drill on the run from forty metres out Francis who had been very good early missed three shots for goal in a row and to my mind it was most likely fatigue. In the last goal kicking drill in this sequence the players averaged a low 50 percent accuracy as fatigue set in.

An impressive session today - please don’t ask me any questions that might involve things like ranking Reynolds, Coleman And Sheedy as coaches, at least not until after Christmas.

With all the fights he's getting in, maybe Laverde's reputation really is shot within the playing group.

What’s this about? Are there rumours about Laverde I’m not aware of?

Thanks for another great report Jackie.

Hope we’re not just “waiting out” whatever is wrong with Joe. He is supremely important.

I agree with Riolio on Joe’s importance but seriously if anyone’s panicking about him you need to get out and smell the roses. It’s mid-December and he’s running laps. He could be lying flat out on a surgeon’s operating table in mid-December and still be Cherry Ripe for round 1.

he also points to Jake Long's improved fitness - he is keeping up with people like Zaka right to the end of the session.

Great to hear that about Longy

You tell us not to be too concerned about Joe, then in the next paragraph say we should be replacing Joe in our Rd 1 best 22 teams :). Hopefully he is ok, if not he has surgery over Christmas break.

Can you tell me a little bit about how the fridge trained. listening to a Howlett interview he was saying what a great kick Begley was off both feet pin pointing passes, did you pick up any outstanding foot skills at training besides McKennas.

Fantastic report as always! Thanks jackie

A pic popped up of Lav and Fantasia today. Bit of a scuffle?

Hope we're not just "waiting out" whatever is wrong with Joe. He is supremely important.

Do you actually think there is any chance they are?

Whatever it is, it is being managed as best they see fit, and no injury ever does best management include, just waiting it out.

Maybe Joe not doing any kicking is a way of reprogramming his kicking action. If he doesn’t kick the ball for long enough, maybe he’ll forget how to do it and they can rebuild his action from scratch.

Fantastic report as always! Thanks jackie

A pic popped up of Lav and Fantasia today. Bit of a scuffle? 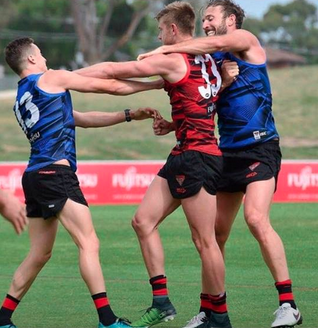 Thanks again for your wonderful efforts Jackie!!

What are your thoughts on the big improves from last year. Players like Gleeson, Dea who are probably still fringe B22 but with a solid preseason could sneak in.

I presume brown has been training in defence with Francis, Stewart and hooker forward. How are they splitting up the kps between the red and blue team in match sim? What match ups are we seeing amongst the kps?

Is hooker kick all goal this year?

Hope we're not just "waiting out" whatever is wrong with Joe. He is supremely important.

Do you actually think there is any chance they are?

Whatever it is, it is being managed as best they see fit, and no injury ever does best management include, just waiting it out.

didn’t the club try and wait out Hocking’s groin issues about 2 seasons ago, and it just got worse and worse?

I’ll assume Raz got mouthy / buried LAV who has fired up. Two Italian stallions going at it.

Bit of biff at training is great, as long as you don’t go full Setanta.

Ok now I can do my Job, Checking BB and waiting for this report must kill my boss.