A few players didn't play but i would prefer not to mention. Below are some obervations of the players I took note of today. If a player isn't mentioned it may or may not be because he played today!

1. Hibbo - First half played reallty well in his normal half back role playing against Winderlich or Chappy! prob one of the best in first half before fading in the second half! In the last quarter lichy kicked 3 goals against him.

3. Chappy started on the interchange at the start of the quarters,  kicked three goals, running goals all around the 40-50 mark- no set shots, played through the midfield and at times across half forward line.- Decision making was a standout - looks fit and strong

5. Stants played against Hocking - Stants first quarter was impressive  and found a lot of the ball but Hocking dragged him back in the last three quarters. Stants had some stints across half back with reasonable success - got caught holding the ball with colyer chasing.

6. Daniher 3 goals and one assist- Hurley or fletch had the match up - Daniher kicked a goal from a mark leading up the ground in 1st quarter and swung around from 50 and drilled it. In the 2nd quarter played more in the ruck and kicked a running goal from outside 50 and in the 3rd quarter brought the ball too ground - wrestling Hurley with Fletch dropping back- picked up the ball and kicked it over his right shoulder for a goal- great dexterity for a big man

7. Jetta kicked 2 goals and set up another - a few run down tackles and defensive pressure was good - Gleeson and Ashby had the job on him.

8. Winderlich - IMO 2nd best on ground- had about 18 - 20 touches and I remember him kicking one goal to the far end and three at my end. Played at times as a high half forward - even getting touches in the back pocket, also had a stint at full forward and his class shone agisnt Hibbo.

11. Zaka - 3rd best on ground - played in the centre racked up 20-25 touches- standing beside or against Jobe at most stoppages- Zaka one about 5 stoppages and linked up well across the ground - He looks set for a big season

18. Hurley 5th Best on ground- overall i would give his game a 7 - Daniher kicked two goals against him but Hurls was able to read the ball a number of times to cut the ball off and gave us promising drove off half back! set up two goals, turning defence into attack with his kicking.

20. Merrett - Played on the wing and kept on knocking up grabbing the ball - he ran the lines well - and set up a few forward entries. A few times his kicking let him down, he took the mark and tried kicking over the man on the mark but was leaning back, his kick went over his directed target a few times. Needs to work on getting back off the mark quicker and back himself to hit the target. Also fluffed a kick - when he tried kicking around the corner - Goodwin spoke to him after this.

21. Heppell - Best on ground - First quarter up agaisnt kav or O'brien and notched up about 10-12 touches - He set up play, great kicking skills and tackled well. All up prob got about 25 touches

25. Steinberg - in my recollection he took about 7 marks for the day in and around the 50. I think he kicked at least three of those possibly even kicked 4 - Played a great leading role from full forward against Pears. Steinberg also worked up the ground a fair bit and took some marks on searching leads. His set shot kicking is the most reliable out of the third tall types - Hardingham 1 goal from 3 shots /Ambrose 3 goals 2 behinds

30. Ryder 4th best on ground  - Dominated the ruck against Thurlow and Daniher - played well around the ground and he looked to be moving well for this time of year - a long year ahead - so i dont expect to see him playing every pre season game.

39. Hocking stopped stanton after the 1st quarter but also got involved in a lot of the play - Kicked a goal, after taking a mark at the top of the square. Ran through the middle of the ground and drove it forward with stants trailing him at least three times.

47. Ambrose - He was the third tall forward with Daniher and Carlisle in the same forward line as him.

Fletch, Hurley and Hooker rotated on him- He played from about 30 - 40 meters out. Worked up and down the ground and presented well - took at least 6 - 8 marks and kicked 3 goals.

Forward effectiveness - 6/10 - Great to finally see some variety in our leading patterns including set shots and goals from our 45 degree angle leads been hit up (Steinberg, Ambrose, Hardy and licha)

steinberg's kicking for goal has been a weakness. very nice to hear that he may be improving on that front.

thanks for the report.

steinberg's kicking for goal has been a weakness. very nice to hear that he may be improving on that front.

thanks for the report.

His ball drop has improved and he is kicking through the ball, with momentum towards the target- good signs -

Onya EFC4, your bloods worth bottling. So glad you got there.

Thanks for the great report.

Vision up now of the pracy match

also add one more to Daniher - that holding the ball on the vision was a goal.

Love your work mate, cheers for the report. Did you notice Colyer much (and if so, what role did he appear to have)?

Vision up now of the pracy match

also add one more to Daniher - that holding the ball on the vision was a goal. 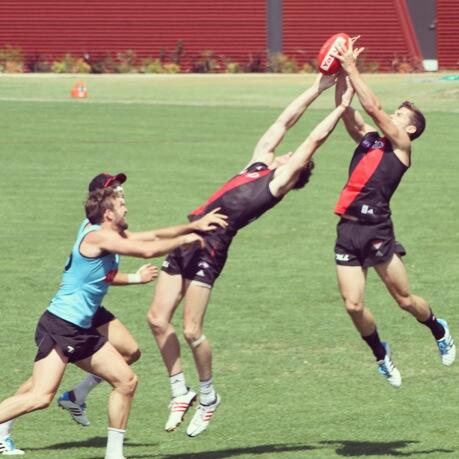 Thanks for the report EFC4ever :).

For clarification, is the Merrett you are referring to Jackson?

lol guess it would be, didn't read the numbers :)

Awesome! Thanks for that!

Anyone have a clue if they will be playing another practice game shortly?

Ambrose?! I though JD would have marked that at the highest point. Then I realised it was Carlisle.