Genuinely saddened.
I know it wasn’t unexpected and he hadn’t been at the top of his game for a while, but he was my favourite author.
I looked forward to his books being released like singles from my favourite band.

I could read all four of them again tomorrow, and I’ve already read them at least a half dozen times. At least.
On a selfish note, wish he could have given Vetinari the retirement he deserved.

Agree Wim. I was/am a massive fan of Terry Pratchett. The last book I read of his was Steam. Did read the Long Mars as well but feel he didn’t have much input into it. Will miss him and his wonderful sense of fun and adventure. Taken way too early at 66.

Well, eight years after being diagnosed with Alzheimer’s, Terry Pratchett died this morning. This makes me more sad than I’d have thought.

Small Gods and Reaper Man for me.

Got shelves of sun-bleached Josh Kirby coloured spines with pride of place in the “library”, all wrinkled from multiple readings.

Saw his documentary on assisted suicide, and it was heart wrenching.

Resigned myself to this happening when I heard the news of his Alzheimers, but there is still a piece of me missing now. His writing really had a massive influence on me starting in the early 90’s and still reading him now.

And I love Good Omens.
I love his observation that any cassette left in a car for more than six months will turn into Queen’s Greatest Hits.
“Didn’t you have a flaming sword? You did, didn’t you. It flamed like anything.”
The lesser known Horseman, Things Not Working Properly Even After You’ve Given Them A Good Thumping.

And I love that he put me onto Gaiman, and the wonderfully pointless Robert Rankin.

A truly sad day. An author I will genuinely miss. R.I.P Terry Pratchett
I know it was a collaboration, but Good Omens is a book I could read endlessly

The BBC did an adaptation of Good Omens recently with Peter Serafinowizc and Mark Heap playing the main characters and a cameo by Terry himself… Pretty good stuff.

And I hated the Josh Kirby covers.
Particularly the one for Moving Pictures. Many a teen night was spent looking at that cover…

The BBC did an adaptation of Good Omens recently with Peter Serafinowizc and Mark Heap playing the main characters and a cameo by Terry himself… Pretty good stuff.

I think his run of ‘real’ Discworld novels from '98-'02 stand up with them.
Carpe Jugulum, The Fifth Elephant*, The Truth, Thief of Time, Night Watch.

If you stopped there you wouldn’t have missed a whole lot, imo.
Read them all and enjoyed them all, of course, but still…

*Accidentally typed The Fifth Element…and only. just. got it.
I am an idiot.

this is one of my fave passages:

For the last few hours he has been very busy. He may be deaf and a little hard of thinking, but elderly wizards have very well-trained survival instincts, and they know that when a tall figure in a black robe and the latest in agricultural handtools stars looking thoughtfully at you it is time to act fast. The servants have been dismissed. The doorways have been sealed with a paste made from powdered mayflies, and protective octograms have been drawn on the windows. Rare and rather smelly oils have been poured in complex patterns on the floor, in designs which hurt the eyes and suggest the designer was drunk or from some other dimension or, possibly, both; in the very centre of the room is the eightfold octogram of Withholding, surrounded by red and green candles. And in the centre of that is a box made from wood of the curlyfern pine, which grows to a great age, and it is lined with red silk and yet more protective amulets. Because Greyhald Spold knows that Death is looking for him, and has spent many years designing an impregnable hiding place.

He has just set the complicated clockwork of the lock and shut the lid, lying back in the knowledge that here at last is the perfect defence against the most ultimate of all his enemies, although as yet he has not considered the important part that airholes must play in an enterprise of this kind.

And right beside him, very close to his ear, a voice has just said:

Not unexpected, so the impact is more a resigned sadness than a body blow, but it’s going to take me a very long time to get used to the idea of a world without Terry Pratchett in it.

But I suppose there’ll be a little bit of Terry Pratchett on mine and tens of millions of other bookshelves, certainly for as long as I live. Which is probably as close to immortality as you can get.

Walk your desert in peace, my friend.

Never read any of his stuff, nor even contemplated reading any of it.

But I understand that people feel as sad as I did when Elmore Leonard died a year or so ago.

Gutted. My favourite author. Haven’t read the last two discworld novels (sitting on the shelf growling at me), but had just finished the Long mars (not as good as the first two, but still a great concept). Might have to go back to the beginning and start the entire Discworld series from scratch (again!) just for fun.

Also agree with Zebba on seeing the doco on assisted suicide.

Vale, Sir Terry, you will be deeply missed.

Never read him (nothing personal just not my preferred type of books) but i know that feeling when a favorite author dies I.e when Ian M Banks shuffled off this mortal coil in 2013, and Arthur C Clarke in 2008. 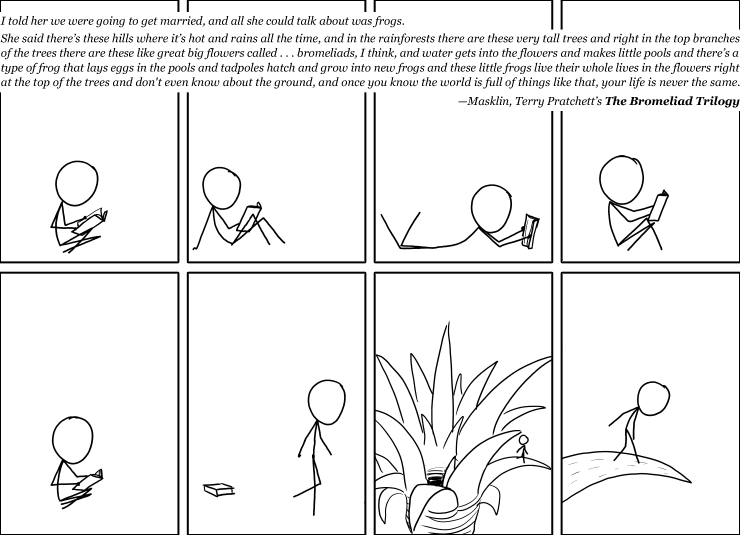 
I’ve never read Wodehouse. Will give it a run.

Might be anachronistic now, considering he wrote from the period 1900-1972, and largely about the British upper classes, but he took the p out of them well.
next page →