Some people are willing to say we will wooden spoon. 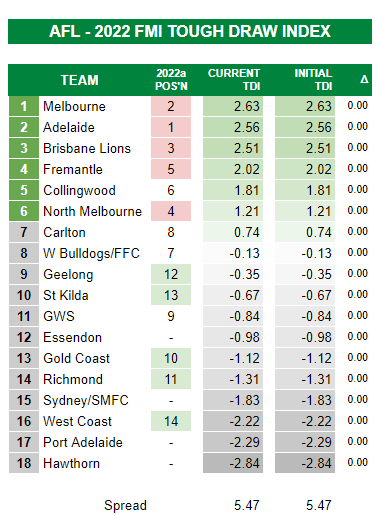 (When you have 10 rounds and 17 opponents, the fixture is pretty bloody significant.)

Is the fixture out yet?

As an up-front comment, to generate the below and likely ‘believable’ data, the four new teams entering the AFLW this year (Essenson, Port Adelaide, Hawthorn and Sydney) have all been allocated a rankings point start position of 650, which is well below the standard of 1000. This was done as there is no form line of these teams and no top evel experience. The past expansion team inclusions have all shown the new teams to play at a rating similar.

Surely at least on paper we’re ranked higher than the rest of the new clubs? Must be going off strength of schedule. Hurry up and give us a 17 round competition.

We already had season 2022A this year.

Surely at least on paper we’re ranked higher than the rest of the new clubs?

I may have been prompting for outrage

They can’t win that argument right now; anything else will be arbitrary too.

Is the fixture out yet?

Why is the Essendon sending emails asking for donations to fund the AFLW team? After not playing in the 2022 AFLW season due to reluctance to get vaccinated against COVID-19, Georgia Patrikios is theoretically able to return to St Kilda

(The Adelaide reluctant is pregnant and on their inactive list.)

Georgia P was the first one I thought of, when the policy changed.

the article says she can go straight back into training, but surely she is close to out of contract?

If I remember correctly, she was on a 2 year contact and this upcoming season would be her 2nd year (season). She was placed on their inactive list, not delisted.

how will the existing AFLW contracts work with the second season in a year? are they just time based or number of seasons/games?

Not sure, but I suspect they have been signed on for ‘seasons’ not years.

The AFL was always going to abolish the vaccination program around this time with the upcoming AFL season - You cant have players missing two seasons because of this policy. Season over for Dees young gun after training mishap

This was pretty nice

I think that is a fairly reasonable outcome. Ideally at some point it needs a bigger venue. But for now, yep, Marvel is a great spot for it.