The Dons have hired Shaw and Elshaug - both former Essendon players - as part-time scouts. 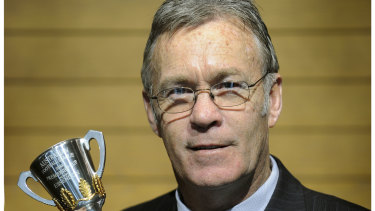 Robert Shaw is back at Essendon.CREDIT:CRAIG ABRAHAM

Shaw, a school teacher, will focus on recruiting from the school system, which includes private and Catholic schools, having coached Brighton Grammar’s football program for many years.

Shaw worked as an assistant coach with the Bombers in the late 1990s and 2000s, including for the premiership under Kevin Sheedy.

Like Shaw, Elshaug will report to Essendon’s long-time list and recruiting manager Adrian Dodoro, who has brought in a raft of sought-after seasoned players over the past two post-seasons, headlined by Devon Smith (traded in 2017) and Dylan Shiel (2018) from Greater Western Sydney.

Elshaug played in Essendon’s 1985 premiership side, having crossed to the Dons from Melbourne. He went on to briefly play at Collingwood before making his name as an assistant coach under Denis Pagan at North Melbourne. He finished up with the Saints after several years as the club’s head recruiter.

St Kilda revamped their recruiting structure last year, bringing in a new list manager in James Gallagher, who in effect replaced Elshaug but in a role that placed greater store in contracting and list strategy. Chris Liberatore is national recruiting manager for the Saints.

Good to see Shaw back on the payroll. He is too good not to involved at the Club.

I don’t follow other team - how good was Elshaug at spotting talent for STK? They don’t seem to have recruited that well over the last “several” years…?

I don’t follow other team - how good was Elshaug at spotting talent for STK? They don’t seem to have recruited that well over the last “several” years…?

id say their big issue is development, however who knows with that club.

Of course! The coaching team thread! I didn’t see a thread here - naturally checked out the DJ King thread and didn’t see it posted there, so assumed the draft and trade board would be the logical place to start a new thread.

Participants of the DJ thread went to dodgy high schools in Broady or Croydon not the hallowed halls of Brighton Grammer. They’ve been too busy talking about which figure from underbelly they grew up with to notice this news.

The EDM lovers grew up in South West Victoria apparently. Not sure how that happened.

I don’t care either way ben.
Just pointed out it was already covered.