I dunno if the Friday quiz is a regular thing, but bugger it, it is today. 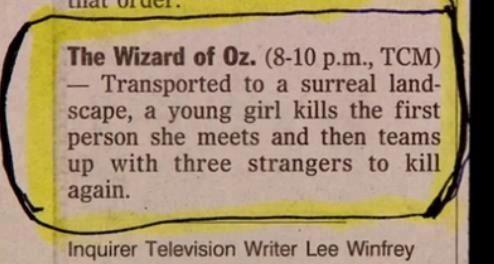 EDIT: answers added for the ones that have been correctly answered so far!

1. World traveler hiking through a small town, encounters horrible police brutality, and must escape to nearby woods in an effort to survive. First Blood (aka Rambo)
2. A local lawman must deal with a charismatic but delusional newcomer while preparing his village for a forced relocation. Toy Story
3. A group of innocent children are lured into a terrifying man's lair and murdered by his slaves. The final child is spared, and installed as the new leader of his organisation. Willy Wonka & The Chocolate Factory
4. A man's wife is brutally murdered by a serial killer and in the attack his son is left permanently disabled. In a twisted turn of events the son is kidnapped and the father tracks him for thousands of miles with the help of a mentally handicapped woman. Finding Nemo
5. A man doesn't leave his home town for thirty years then has a mental breakdown. The Truman Show
6. A land dispute leads to a ruler being consumed by a wild animal on his wedding day. Shrek
7. An orphan immigrant turns to a life of crime, and eventually murder, to provide for his family and attain wealth and power. The Godfather
8. A traumatized child genius, that has grown up in a psychologically and emotionally abusive family, takes out his rage on some would-be entrepreneurs. Home Alone
9. A girl pretends to be in love in order to win a televised competition. The Hunger Games
10. An orphan is taken from his godparents and forced into an institution that continually puts him in life threatening situations. Harry Potter
11. A man is forced to assume a new identity to work around the law and see the things he cherishes most. Mrs Doubtfire
12. A troubled youth sets a killer free to rejoin his gang. Free Willy
13. A man, still dreaming of his lost love, is forced to confront his biggest fear in order to save the lives of many sick people. Flying High/Airplane!
14. A young prince is ostracized from his kingdom for years surviving from the aid of two unlikely strangers, only to return years later to reclaim his rightful throne through force. The Lion King
15. Two innocent good-hearted friends get unintentionally involved in a kidnapping conspiracy. Their only way out is to become killers themselves and eventually strike a deal with the FBI to go on a dangerous undercover mission to expose the kidnappers and save the woman they love, but the woman they are trying to save is tearing their friendship apart. Dumb & Dumber
16. Two high-profile rivals bond and join together to stop an international conspiracy of slavery and murder. Zoolander
17. A hero turns his back on what made him famous to pursue his first love. The hero is then kidnapped and forced to embrace his old ways to save an entire civilization. Space Jam
18. A teen's dancing helps his friend achieve his goals to the dismay of his cage fighter brother. Napoleon Dynamite
19. A quartet of invaders launch a coup in a foreign land and in doing so utterly alter its fragile climate. The Chronicles of Narnia: The Lion, The Witch & The Wardrobe
20. A mysterious murder throws a rookie and his fellow officers into a dark world of shoot outs, drug trafficking, German nationals, and crooked cops, all while vying for control against a rival group of law enforcement. Super Troopers
TomsDons August 29, 2014, 12:05pm #2

5. A man doesn't leave his home town for thirty years then has a mental breakdown.

- That one with Jim Carey in it Truman Show

5. A man doesn't leave his home town for thirty years then has a mental breakdown.

- That one with Jim Carey in it Truman Show

11. A man is forced to assume a new identity to work around the law and see the things he cherishes most.

3: Charlie and the Chocolate factory

11. A man is forced to assume a new identity to work around the law and see the things he cherishes most.

3: Charlie and the Chocolate factory - BANG!

How are the Wet Bandits "would-be entrepreneurs"
And I guess “world-traveller” is because he fought in different wars.

I reckon that was one of the harder ones. Onya.

How are the Wet Bandits "would-be entrepreneurs"
And I guess "world-traveller" is because he fought in different wars.

Please note the word "poor" in the thread title.