Is there another agenda?

I’m interested to know what people think but is it possible that there are issues other than winning against Port Adelaide?

e.g. are we now more concerned with developing young players? You may be able to think of other possibilities.

I refer in particular to the issue of Giles non selection but I also wonder about swinging Steinberg onto Brown, a player we all know he can’t handle, for a critical period last week.

Port has two fine ruckmen - we have McKernan who gives it everything but was outgunned last week and the fill in ruck efforts of Daniher and Ambrose were pitiful.

Giles played his best game for us in the VFL last week to push for selection ahead of Ambrose who averages .5 goals per game and can’t ruck. (although he did lay three tackles last week.)

Giles and McKernan are not great ruckmen but have operated very well in tandem in the VFL.

Giles has been named emergency which means that the ruckman who you are theoretically trying to “improve” won’t play in the VFL this week after his fine effort last week.

I find this puzzling but wonder if I am being paranoid and seeing something that’s not there in the latter part of the season.

If the question you are asking is are we tanking, the answer is yes lol

I don’t think there’s any doubt about that. I’d be really worried if that’s not the case.

I got as far as “we all know” and stopped reading. About the only thing we all know is that we don’t all agree on anything. All I see is a bunch of people ■■■■■■■■ and moaning about Giles’ non-selection and Steinberg in general. I think neither of those things are indicitative of jack ■■■■■■■ ■■■■.

If anyone thinks Giles playing last week means we win, they’re an idiot. If anyone thinks Steinberg on Brown either in the final last year, or the game last weekend are the reasons we lost, they are an idiot. I don’t believe in “my country right or wrong” but I do believe that criticism should be proportional and fair, and neither the Giles nor the Steinberg criticisms getting bandied about here are that. They certainly don’t indicate a conspiracy. Seriously, “another agenda”? Or is this more subtlety?

The ruck selections have been strange for a while even when Bellchambers was available, so personally I’m not reading a great deal into that. But I do agree with others that getting smashed in the ruck every week doesn’t help the younger mids etc… Additionally, if development is the primary focus, then surely at some point they need to see how Smack performs as second ruck, because it’s so obvious that that is the role he is most suited to. It won’t help him if they finally give him that chance in about round 21, after he’s stuffed from rucking alone for 8 weeks.

The other issue with not having winning as the primary focus, is, how do the senior players handle that? Are the coaches directly telling guys like Goddard, Hepp, Hurley and Hooker, that winning at the moment is a bonus, not the priority? They must be having some sort of discussions along these lines and I would imagine you’d have to be very careful about how those discussions are worded, because you don’t want the senior players losing spirit over the remainder of the season.

Why would someone named as an emergency not play in the VFL when both teams play at different times in the same state?

I don’t think we’re tanking. I think the coaching group have a particular structure that they are working to (maybe because our midfielders can’t run out games with one less helping hand ) and won’t budge on it.
The coaching group also don’t trust Giles enough in the AFL and are making sure he earns his games.
Maybe they want to know whether McKernan can last longer than two months as sole ruck as that’s the only future they see in him. Maybe they are still undecided whether to upgrade him.

Or…
Thinking like an idiot doomsayer…
Hird is probably acting like a ‘interrum’ coach under the assumption he will not be here next year and making selections.*

its the melbourne influence 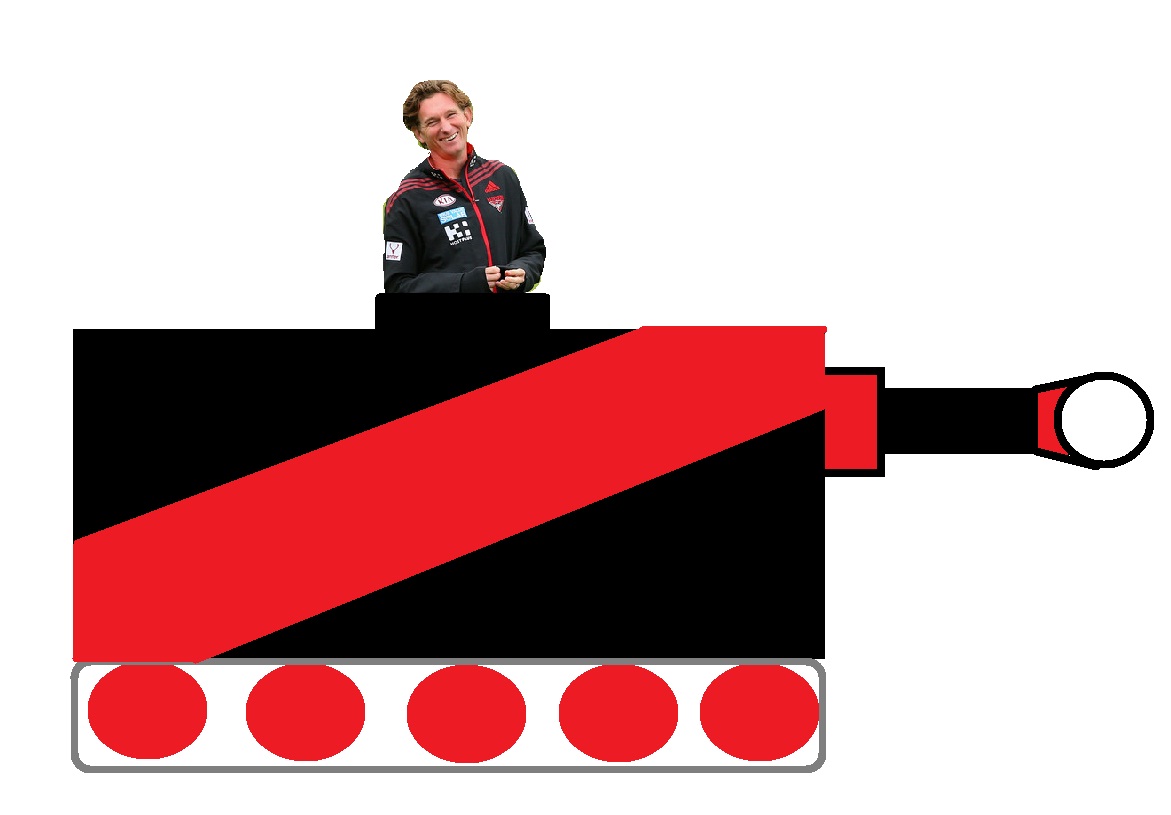 I don’t get why everyone is getting all apoplectic in here. It’s obvious that finals are beyond reach this year, so we are heading into full on development mode. This is separate to tanking as you can still get games into the kids without sacrificing that competitive winning mindset. Whether we win or lose games is irrelevant at the moment. All it will determine is the draft pick Essendon will receive.
Putting time (7-8 remaining games) into kids like Laverde, Langford, Brown, Gleeson etc. now will put us in good stead for next year.
Whether Giles or Mckernan plays is also pretty much irrelevant. Hirdy clearly has a one ruck policy and Mckernan is ahead in the pecking order. Either way we were going to lose the hitouts last week (and probably this week too) but all that does is allow the kids to get experience in sharking the opposition taps.
We have the nucleus of a good side, so a full rebuild is not required. IMO all we need is a fit midfield and use the time we have now to develop that speedy midfielder (hopefully Laverde) that we have been missing. Also we need that x-factor in the forward line which we’re finally seeing with Edwards and Langford. Getting these guys playing with Daniher is crucial to our success going forward.
All in all i think we’re in a relatively good spot.
It could be worse, we could have fark carlton’s list!

It doesn’t matter how much you Stand By Hird, tanking doesn’t allow you to beat City Hall.

No. Bottom of the barrel would playing a guy who got his ■■■ handed to him the week before as the lone semi-recognised ruckman, with a 190cm non-ruckman (non-anything really) and a 200cm developing forward as support.

If Giles is SO bad then why did he we target him in the preseason and lure him away from Adelaide’s more attractive offer of more years and more money?

What’s keeping him out of a side that is basically made up of players with than then 30 games? I mean, everyone else is getting a shot, why not a recognised ruckman with form in the VFL when we are desperately crying out for one?

Either Hirdy has lost the plot, Giles insulted his mum, or something else very odd is at play.

He can’t ride a bike without falling off. What makes you think he can drive a tank?

I suspect they will be embarrassed into giving Giles a run in the VFL. - let’s see what happens.