Special time Sat 7.45 to fill the void of no games this week. 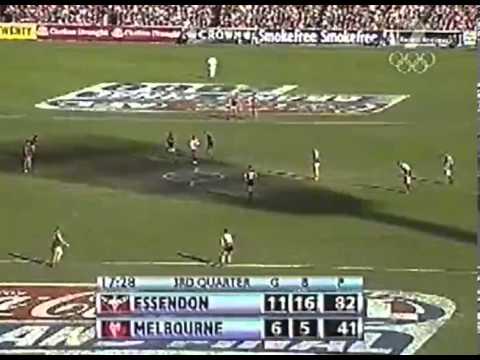 But there are no games the week after, either.

I will be watching closely, from Bangkok, in the grand ballroom of the Shangri-La hotel. This is the biggest GF function outside Oz, limited to about 1000 people and a couple of huge projection screens.

I lined up at Colonial Stadium for the entire finals series and was sixth in line for GF tickets. My mate and I were on the news, mum recorded it on VHS.

The morning of the GF we had breakfast at a Cafe in Bridge road, though I was much too anxious to eat much. The scars of 99 ran deep.

Walked into the G late morning. Despite being sixth in line for tickets we were allocated seats at the top of the Southern at the punt road end.

Game is a blur to be honest. I remember the final siren sounding and feeling relief then being overwhelmed with joy. I cried. Those around me were in tears and we hugged and high fived.

After game I think we went to an Essendon hosted event and then made our way to Windy Hill. Then no memory. Went to KMART and bought the DVD and then family day to continue to celebrate.

I hope we all get another opportunity to experience a winning GF again.

I hope we all get another opportunity to experience a winning GF again.

Win the premiership and I’ll be mum’s gone wild.

Lol so I have a power outage with a ETA of 9.30 and 23% on my phone. Lets hope my work laptop is charged up

And my power is back

I’m poor and stuck in Sydney. I’m at the Drummoyne Sports Club. Oddly, it’s much less packed than it was in round 20 when we faced Fark Carlton.

I’m watching it now with Heff7 to counterbalance the 2010 GF being shown on kayo at the moment.

They didn’t know how to lose

Annnnnd my power has gone again.

How long until the game starts, I have to do something for my wife? I keep telling her, GF Day is my day, do all that stuff yourself and don’t talk to me until after the game.

Feeling tired but very bloody pumped. Arrived at the G last night just before midnight to line up in the MCC queue. Managed to get awesome seats on the members balcony. After we got our seats I went home for a quick power nap. Even so I will be relying on adrenaline to get me though the game.

i don’t mean to confuse, but is this one better quality?

i don’t mean to confuse, but is this one better quality?

It’s a couple minutes longer, too, so presumably is complete.