A bloke I know makes something similar to these for soccer.
Any interest in these on postcards, stickers or prints? PS This was my son’s first game.
He then asked me the next ten times we went to the footy, “Will Lloydy kick 13 goals again today Dad?”

I watched that game in a hotel in Hobart.

First Essendon game was the 1993 QF v Carlton. First ever final under lights, we had a few out that night and only lost by less than a goal. Timmy Watson kicked one right at the end to get the margin to under a kick and the siren went a matter of seconds later. All elementary in the end and we got the ultimate revenge on this ■■■■■ 3 weeks later!

First ever game of AFL football I went to was one I was in the Little League at half-time. Carlton v Fitzroy also in ‘93. I remember it most because SOS kicked 10!

Can’t remember the year, but I was taken to a Melbourne/Essendon game by my next door neighbour’s old man when I was about 6 or 7. Don’t remember anything much about it other than a vague recollection of Max Crow playing quite well (he may have kicked a few).

I don’t believe this was my first game (10 April 1999), but it’s definitely the first game I actually remember. What a time to be alive! 90’s footy was just so much fun. I feel the game hit its peak back then and won’t ever be as good.

My first game was Collingwood v Essendon at Victoria Park in 1961. I was a little kid in primary school and I went with my best friend, another little kid in the same class, on our own in the train with the blessing of both sets of parents. I doubt many parents would allow that today. We started well and from memory led at quarter time, but from then on it was all Collingwood and we were murdered. (The Essendon team that is, not us little kids.) My best friend, who went for Collingwood, was happy.

First game I ever went to was round 14, 2003 against St. Kilda. We belted them, and I got to see Hird and Lloyd at their very best. I remember Hird took a ridiculous mark at the start of the game, but I can’t find any footage of it anymore

I was 6. All I remember is being on the ground after the game and noticing the wooden stops that had come off player’s boots.

Checking records we had a 2 point win

The first game I remember attending was the 1986 elimination final against Fitzroy. It was a heartbreaking experience (and cold - what game at VFL Park wasn’t).

The first game I can remember clearly was South Melb vs Essendon at The Lakeside Oval in 1978. Terry Daniher kicked a couple and hurt his knee and Neville Fields played for the Swans. We won quite comfortably. A really drunk Swans supporter gave me his beanie at the end of the day and said the Swans were hopeless. The Baby Bombers were just gathering pace and the Essendon faithful knew something special was happening.

There were probably games at Windy Hill before this one, but this is the first game I can say I definitely attended. Got on the replay too! 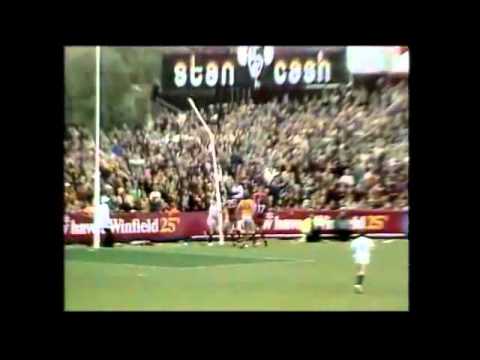 My first was circa mid-late 90’s against Collingwood on a Friday or Saturday night. Sat in the top deck of the old Olympic Stand, my dad who hated the footy read a book the whole time, we lost and got rained on.

Also, of every sporting event the old man has ever taken me to, the team I support has lost on all bar 1 occasion. The one victory was when Lloyd kicked 10 against the Eagles at Colonial Stadium in 2001. We even lost the Origin of the Ashes commemorative match at Rupertswood in 1995.

My first game was also Matthew Lloyds first game. He kicked the first goal of the game with his first kick.

I had no idea who he was at the time but I remember Paul Salmon kicked 8 goals.

We did that gane during one of the lockdown Watchalongs. I’d forgotten all about it.

I was spoilt for my first.

1999 vs Hawthorn at Waverly Park. Lloyd kicked 5, Moorcroft 4 and Essendon won by a lot.

I was stiiting on the fence about where the W in Winfield near the ground attendant.

Just looked it up: we won by 46pts, Madden kicked 5, Timmy Watson had 33 touches and 4 goals and Peter Somerville (!!) got the 3 Brownlow votes.

Still got the little Bombers bag (with the VFL logo on it) my dad bought me that day. I had just turned 7 and remember being in awe of the size of the MCG. A really nice memory.