So according to this article, the “Brisbane Bombers” are still a thing? 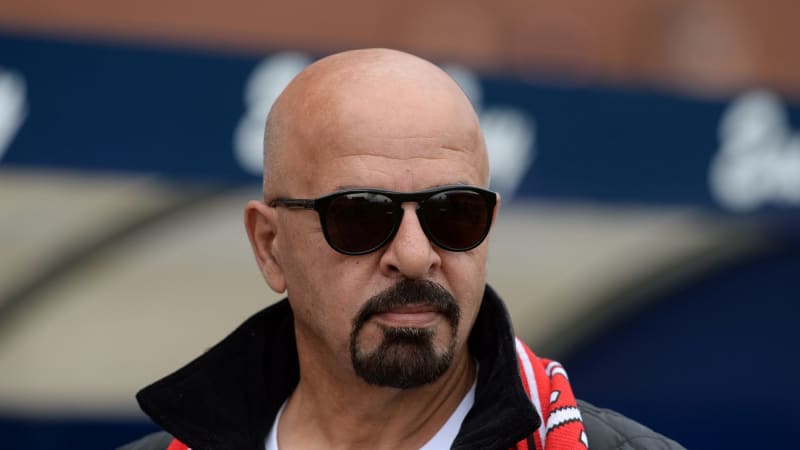 British billionaire Marwan Koukash has emerged as a prospective owner of the Gold Coast after becoming the latest player to bid for the Titans' license.

British billionaire Marwan Koukash has emerged as a prospective owner of the Gold Coast after becoming the latest player to bid for the Titans.

There has been intense speculation that a fourth party has joined the race to buy the franchise, alongside the North Sydney Bears, Brisbane Bombers and the Rebecca Frizelle-Darryl Kelly consortium, although the identity had been a heavily guarded secret.

However, Fairfax Media can reveal the mystery moneyman is Koukash, whose net worth is estimated at $3 billion.

Koukash is already known to Australian sporting fans, having previously brought horses Down Under to compete in the Melbourne Cup. He also expressed an interest in buying the Newcastle Knights, but the NRL – perhaps wary of handing the keys to another self-made multi-millionaire with a penchant for horses after the Nathan Tinkler debacle – instead handed control to the Wests Group.

Koukash, until recently, had another rugby league club on his books. The Palestinian refugee saved Salford from financial ruin when he bought the Super League battlers in 2013. The Red Devils have since come back into the top flight, narrowly avoided relegation in last season’s “£1 million game” and earned a top-four finish in 2017, a season where they also reached the Challenge Cup semi-finals.

However, there have been a string of controversies on Koukash’s watch. The racehorse owner has been involved in a number of disputes with England’s governing body, the Rugby Football League, including the deduction of six competition points for salary cap breaches last season. His outspoken views have also alienated some Salford fans, whose attendance numbers at home ground AJ Bell Stadium have diminished in spite of greater success on the field.

Koukash pointed to the poor crowds as one of the reasons for pulling out of the Red Devils and handing control to a community trust late last month. However, his interest in the Titans appears to be another motivator for the shock move.

Get the latest news and updates emailed straight to your inbox.

It has been reported that some of the interested parties are prepared to bid about $10 million for the Titans licence. While the consortium led by former board members Frizell and Kelly remains the favourite to take charge, Koukash has the financial means to blow the other offers away.

The NRL already has colourful private owners at some of its clubs, most notably Oscar winner Russell Crowe at South Sydney.

However, nothing compares to Koukash’s story. He was just eight years old when his family farm in Palestine was bombed, forcing his mother and seven siblings to walk three days without food until they crossed the River Jordan, where they spent years in a refugee camp.

By offloading Salford, Koukash will be able to direct all of his energies towards the Gold Coast.

“It’s time for the fans to have more of a say with a new era at the club and a team of trustees who have a long-standing association with Salford,” Koukash said via a Salford press statement on Saturday.

“I truly believe that this is how the club will grow. This is only a sideways move and my family and I will continue to be involved as avid supporters and I am happy to be on hand to offer whatever advice and guidance to the board of trustees.”

The NRL wants to get the Titans off its books by October 31, although the management plans to make a call on a new coach before then.

Former South Sydney mentor Michael Maguire has stated he won’t consider replacing Neil Henry if he doesn’t know who he will be answerable to.

Maguire is one of the leading contenders alongside Broncos assistant Jason Demetriou and former NSW coach Laurie Daley for the role. It is understood the drawn-out process has put some of the candidates off as the club plans to make an appointment by the end of the week.

Last i remember, the NRL told them that they had no plans for a second Brisbane team. I thought it ended there.

Im pretty sure at one point the club were seeking legal advise on the matter in 2011-12, and im assuming more pressing legal concerns popped up. So maybe this got put on the back burner.

Is there anybody closer to the situatuon?

The gc titans have lost $12m in the last 4 years. Koucash has pulled out, saying it has no future on the Gold Coast.

This was in the courier mail 5 days ago.

Around that time conjecture about the gc suns escalated.

Gold Coast is a graveyard for sporting teams. Just give up already.

“The Brisbane Bombers withdrew their $10m bid last week amid concerns over the long-term viability of a Titans club that is forecast to post another deficit next season.”

Still alive, but waiting for the right moment

Peter Beattie could have an influence:

Don’t get me wrong, I love the Bombers, but it surprises me that anyone would consider giving a new team that name in this day and age.

I get your point, but where does it end if we have to be so sensitive about absolutely everything?

I’d say “Bomber” is generally no more offensive now than it was, say, post-Hiroshima.

What was wrong with Brisbane Bears?
If flares, ugboots, and vinyl can make a comeback why can’t they?

Saints is a bad name because not everyone is Christian. Demons are satanic. Magpies swoop people. How far do we want to take this?

I get your point, but where does it end if we have to be so sensitive about absolutely everything?

I’d say “Bomber” is generally no more offensive now than it was, say, post-Hiroshima.

I am in no way suggesting that we change our name, I am just really surprised that a new team would use it.
Post-Hiroshima is one thing, but in those days there was also a bit of naivety as they didn’t have blanket TV coverage in living colour like today. Suicide bombers are a constant threat now too.
I read an article a couple of years ago saying that Essendon had “grandfather” rights to use the name, but you wouldn’t expect anyone else to want to.

I am in no way suggesting that we change our name, I am just really surprised that a new team would use it.

Yeah, I got that. And I think there was some talk about a potential name change a while back, but thankfully it blew away pretty quickly.

Fair point about Hiroshima and the coverage of it back then, but another thing is that perceptions tend to differ depending on whether you’re the victim or the perpetrator/proponent.

I think there was some talk about a potential name change a while back, but thankfully it blew away pretty quickly.

I wouldn’t normally say this, but if that is actually the case, fck the Greens.

Im Pretty sure there was quite a few sections of the media looking to change the name after 9/11 and the bali bombings as well.

It’s one thing for us to be the Bombers (and I don’t ever want that to change), but who in their right mind would want to start up a new team in 2019 and give them a nickname that is already somewhat controversial?

Our club will bend over and probably change it one day. I can just see it.

i have a vague recollection of goodwin being asked about it when he was an assistant coach with us. said that we would consider our legal options if they named them the bombers

we would consider our legal options