Does a covert, intelligent non human infestation of planet earth not count as news?

I've been saying for quite a while now that people are brainwashed and given their opinions by "the system" and there is your proof right there folks.

I think you might need to provide evidence of this non human infestation.

I, too, require a point of clarification.

What’s all this about Vinnie? You’re being vague.

It's not news when it's the 'covert, intelligent non human' parts of the planet who produce the news.

One of the biggest feral supercolonies in the world is taking over Melbourne. The invaders are Argentine Ants, and they‘ve formed a mafia that has systematically wrestled control of the suburbs from the native ants over the last 50 years. We find out how they managed to stage such a massive coup and what effects they are having on the native ecosystems.

Narration: The last 50 years have spread terror across the suburbs of Melbourne.
One powerful family is wrestling control of the neighbourhoods away from the locals.
Alexei Rowles: It doesn't really matter how secure you are, if they want something they'll get in
Narration: The family is building a vast underground network.
Home invasions are on the rise.
And the invaders are Ants from Argentina.
They've formed one of the world's biggest super colonies right here in Melbourne.
Alexei Rowles: Not a great deal is known about these ants in Australia. A bit of research was done early on when they invaded but as far as what they do ecologically nobody knows.
Narration: Argentine ants first arrived in Australia, over 50 years ago, and huge campaign was launched to get rid of them;
But even the offer of a bounty failed to get rid of the Argentines.
Ever since their numbers keep rising, now in the billions.
Elissa Suhr was the first person to realise that Melbourne was in the grip of a feral supercolony.
She's profoundly deaf so accompanying her is Kelly, her sign interpretor.
Elissa Suhr: What I wanted to know is why the colony in Melbourne is so big, what enabled it to spread so far?
Narration: The supercolony consists of hundreds of densely packed nests spreading over an incredible one hundred kilometres.
But strangely in Argentina itself, such big colonies never occur.
There each nest has it's own pheromone, and ants from different nests will fight to the death.
When Elissa looks at the Melbourne ants she finds they behave quite differently.
Elissa Suhr: I have two ants here from nests that are 100km apart and they aren't fighting.
Narration: So what do these peaceloving ants have that their aggro cousins back home don't?
Elissa suspects the answer lay in their DNA.
Elissa Suhr: I found that they were all genetically uniform these are ants from 4 different nests, and yet they all look the same, so the ants from all over Melbourne are one big happy family.
Narration: Incredibly it seems the Argentine ants have formed an ant mafia, all descended from one nest.
Alexei Rowles now plans to find out what the ant mafia are doing to the Australian bush.
This is first time anyone has looked at the environmental impact of these ants.
Step one is to see if Argentine ants will displace native ants from their environments.
A face off is scheduled for tomorrow morning.
Aussie ants vs El Argentino.
Next morning the preparations for the big fight are underway.
Alexei Rowles: I'm just setting out a bait for the native ants - there's a nest just in there, there's a bit of tuna and I'm going to add some honey, wait for the native ants to recruit to the bait then I'm going to release the argentine ants and see what happens.
Narration: Before long the plate is covered in native Aussie ants, including some huge soldier ants.
Alexei Rowles: I'm going to release the argentines, it could take a while but hopefully they'll find it and we'll see what happens.
Narration: The argentine ants are inside the lunch box.
Here comes the first one.
Alexei Rowles: Did you see that? He's gone because he's on his own.
Narration: The next Argentine to come down the tube is more cautious; he heads back to base for reinforcements.
Before long the foreign invaders are pouring into the ring, not fazed even by the soldier ants.
Alexei Rowles: In a matter of about 10 minutes we've gone from having a plate full of native ants to now being full of Argentine Ants. They've actually fought them all the way back to their nest entrance.
Narration: Alexei finds it's the same story every time, the Argentines always win.
So what does this mean for Australian ecosystems?
Alexei Rowles: If Argentine ants displace the native ants it's a big deal. Native ants are important in a lot of ecosystem processes, such as nutrient recycling, seed dispersal, sometimes even pollination.
Narration: So Alexei's next step is to find out if the Argentine Ants can do the job of the native ants. The task - seed dispersal.
Alexei Rowles: 100%. Many of the plant species here have co-evolved with native ants,
And the idea is that the ants take the seeds back to the nest where as you can see here the inside of an ant nest is potentially a great place for a seed to germinate.
Narration: So will the Argentine ants be up to the job?
Alexei reckons they do have the ability to collect seeds.
But there's one major drawback; they have a preference for exotics.
Alexei Rowles: This is the myrtle leaf milk wort and it's actually one of the worst weeds on the Peninsula.
Narration: Alexei finds that the seeds of this weed are so attractive to the argentine ants that they collect them instead of native seeds.
Alexei Rowles: What this could mean is that we've got one really bad invasive any that's working together with one of the worst invasive weeds. And combine the two and you've got a potential nightmare.
Narration: The ecological impacts are now clear.
Alexei and Elissa's work is the first step towards finding the ants weak spot and breaking up the Melbourne mafia.
Elissa Suhr: Well because of the low genetic diversity of the ants here in Melbourne they all co-operate with one another and that's the secret to their success.
Narration: But Alexei believes their strength could also be their weakness.
His radical solution; bring in rival families to spark turf wars between the Argentines.
Alexei Rowles: Introducing new colonies of Argentine ants could reduce the formation of super colonies, and thereby reduce the impacts from these ants.
Narration: Upping the ante in the anti-ant campaign could give the native ants a chance.
But such an experimental plan could fail just like the campaigns of the 60's, or even make the problem worse.
For now it's every ant for himself.

I for one welcome our ant overlords. 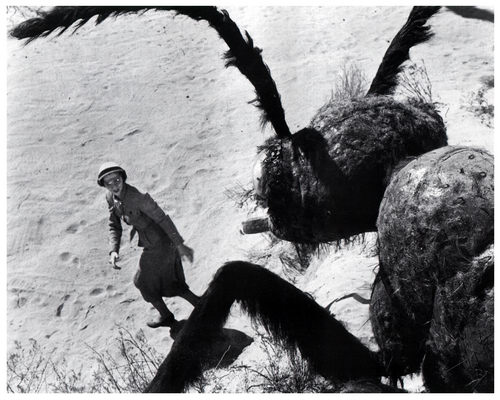 Does a covert, intelligent non human infestation of planet earth not count as news?

I've been saying for quite a while now that people are brainwashed and given their opinions by "the system" and there is your proof right there folks.

This doesn't have anything to do with reptilian, shape shifting Illuminati aliens does it?