So many good films.
My favourite: 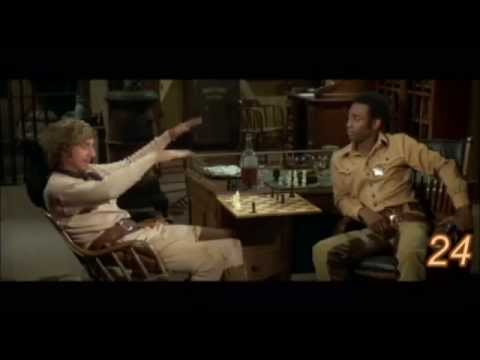 Felt sad hearing about this today.

Very sad to hear about his death. Grew up loving him. Young Frankenstein, Blazing Saddles, Willie Wonka and Stir Crazy were my staples growing up.
The Woman in Red was one of the funniest movies ever made. The scenes with his dear wife at the time and comedy genius Gilda Radner after his character stands her up for a date were gold.

Blazing Saddles is the best of his best.

Willy Wonka is my favourite film. Wilder shiits on what Johnny Depp went for in the newer version.

Willy Wonka is my favourite film. Wilder shiits on what Johnny Depp went for in the newer version.

Agree re Jonny Depp (even though I like his acting)

Love Willy Wonka and the Chocolate Factory. Went to Alton Towers when I was in England a few years back. To many hair raising and vomit inducing rides for me. Spotted the Chocalate Factory up on the hill, headed straight for it. Did the chocolate river and the elevator. Was fun.

Brought laughs and pleasure for children and adults alike.

Willy Wonka would get rejected for a WWCC these days

See No Evil, Hear No Evil with Richard Pryor was an absolute classic comedy.

See No Evil, Hear No Evil with Richard Pryor was an absolute classic comedy.

Fuzzy Wuzzy was a woman?

Pretty sad to hear this.
Blazing Saddles is one of my all time favourite movies (up there with History of the World Part 1).
Hear no evil, see no evil was also great.
Also liked Young Frankenstein as well.

Enjoyed all his movies. R.I.P.

Gene Wilder has left us.

Will miss you Mr Wonka.

Scene from ‘Woman in Red’

Very humorous back peddling from Teddy, after he arranged a mate to call to get him out of the house, so that he could go on a date with the lovely Charlotte (Kelly LeBrock).