Looks a decent side. We got this.

Good luck to the fringe dwellers,

The Bombers make two changes for Friday night’s clash with the Crows.

Essendon has made two changes for its clash with Adelaide on Friday night, recalling Martin Gleeson and Matt Guelfi at the expense of injured captain Dyson Heppell and omitted wingman Brayden Ham.

Gleeson will line up for his 93rd AFL game and first since round two, while Guelfi has been promoted to senior coach Ben Rutten’s starting 22 after not being used as the medical sub against Geelong last week.

The Bombers are hopeful Heppell, who was ruled out on Wednesday with a thumb injury , will miss just one game.

Rutten said Gleeson’s return was a due reward for the 26-year-old, who has been a consistent performer across half-back in his five VFL games this season.

"He’s been playing really good footy in the VFL, and obviously there’s an opportunity there with Heppell coming out of the team.

“He’ll add some real experience and maturity. We know Gleeso will come in, give it his best and play really well.”

The Bombers will name their medical sub one hour before the 7:50pm bounce at Marvel Stadium, with emergencies Brayden Ham, Sam Durham, Nick Bryan and Brandon Zerk-Thatcher in contention.

wow thats some completely new, unseen and not discussed information

Get all the key stats for Friday night’s clash with our match preview infographic. 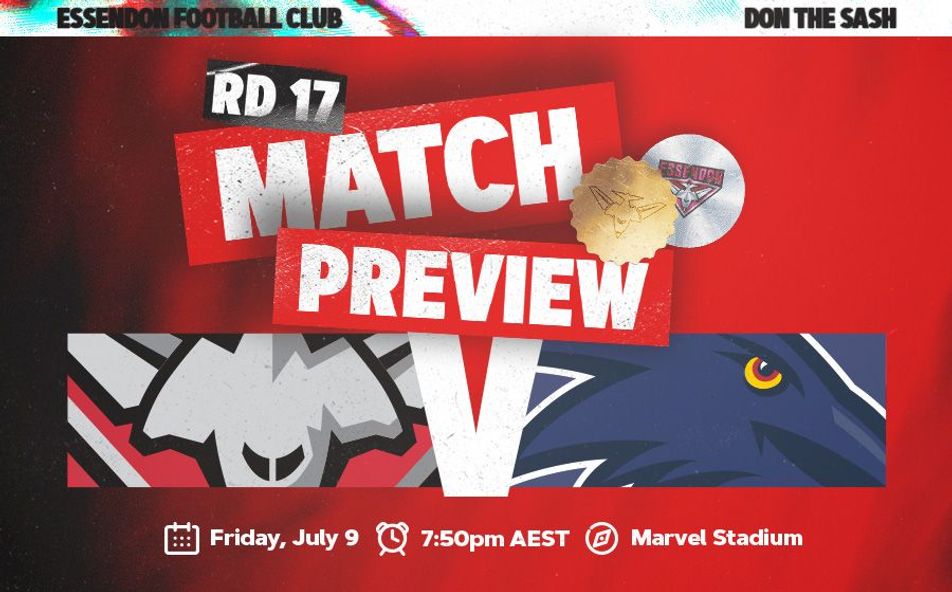 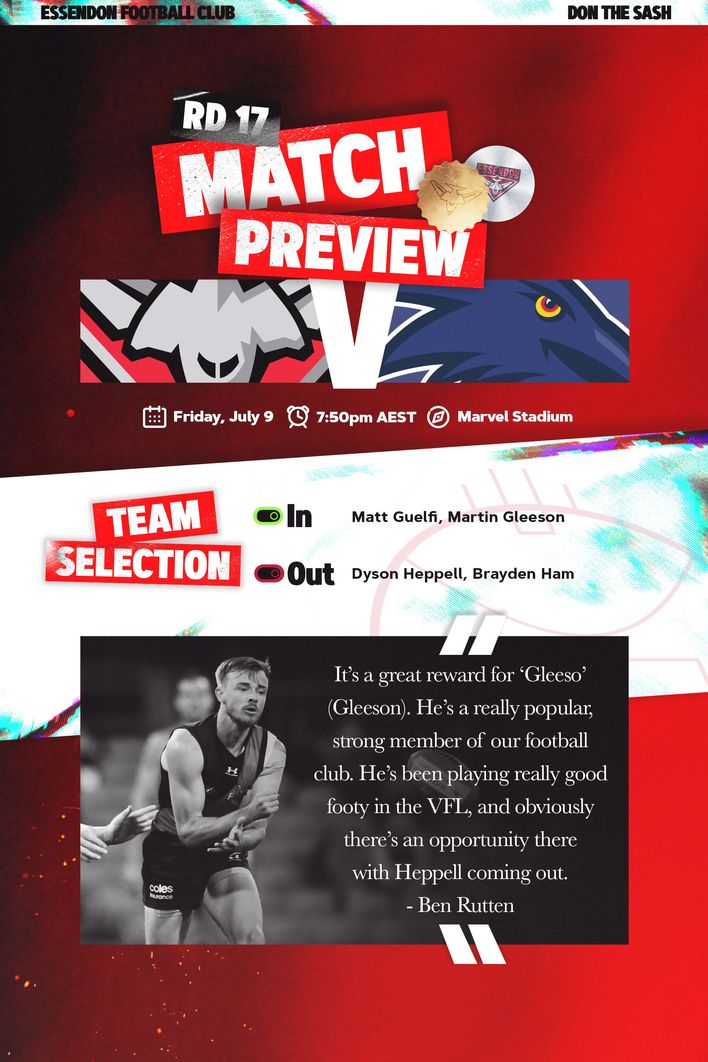 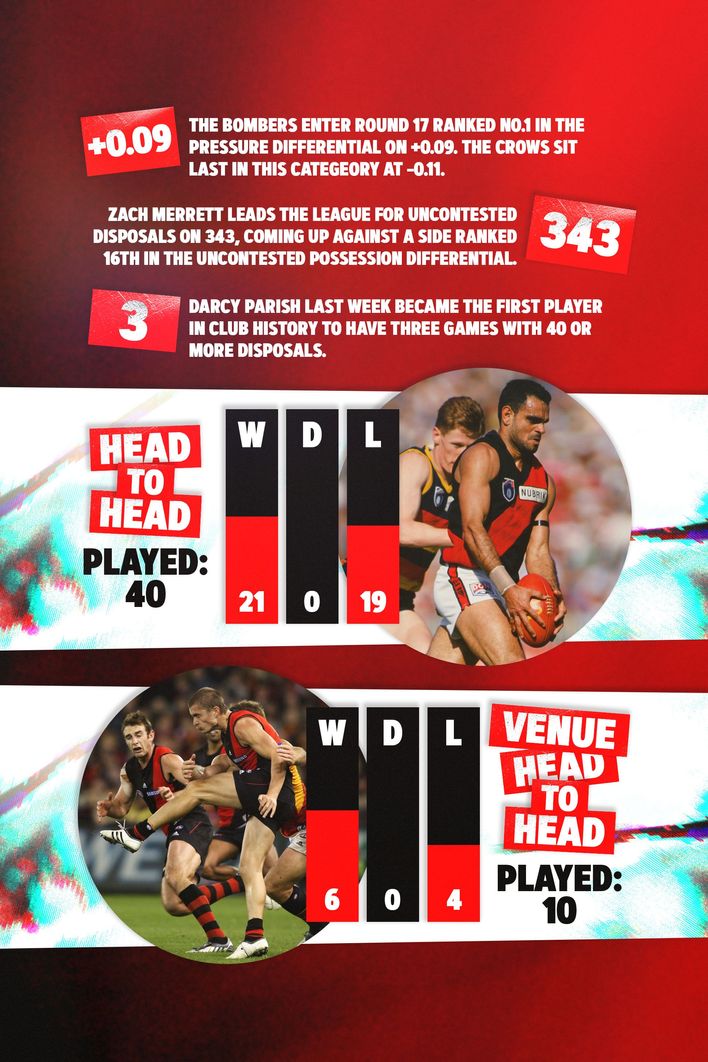 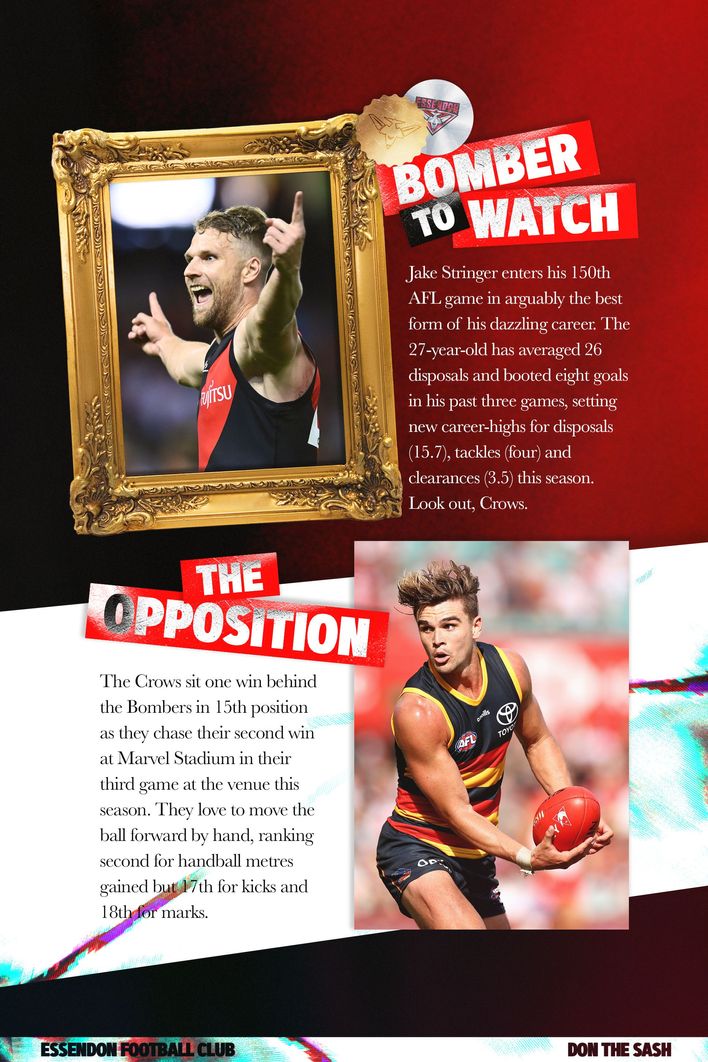 The endless talk about who should be in and out thread?

That match preview in graphic form is a bit lame EFC, … jus’ sayin.

i thought it was always this system

That match preview in graphic form is a bit lame EFC, … jus’ sayin.

oh boy that pressure differential of 0.09

i thought it was always this system

I miss the WTT threads, …

I miss the WTT threads

Remember when we could post images of hot girls looking thru telescopes ?

Those were the days

Is this the match day thread?

Are they still going with the roof open thing at Docklands?

It’s worth noting that the only time I can remember us playing a night game with an open roof was when we done the Crows in round one 2018. Was a Friday night too.

I think we’ve also only played one open roof game since then, round one last year against Fremantle, which doesn’t really count.

Less chance of being shat on by the seagulls too

Remarkably even win loss history with us and the crows

Now that we paid for the website to run and don’t rely on Google, we should be allowed to post them.

We’re too PC now to go back.
Those images live in my mind.