As in only noose knot found belongs to Bubba garage.

Yep.
Bubba said he’s noticed them before but never with a noose on the end of them.

Has someone said it wasn’t actually a Noose or something? Disputed it saying it was some common form of rope usage?

Yep.
Bubba said he’s noticed them before but never with a noose on the end of them.

I’m a bit lost, they accepted what it was, decried it as abominable and came out in solidarity for/with him, pushing his car down the track… sooo??

It was discovered that it was there a couple of weeks before that race. Suggestion that it wasn’t intended for Lawrence, maybe not even a noose in that sense. This probably puts paid to those suggestions

Sooo…
After that happened NASCAR were continuing their investigation and came up that it’s a common piece of rope that is used to open the garage shutters instead of a chain. It’s not in all garages though.
Bubba is aware of such items in a typical garage but has never seen one tied up with a noose end.

He’s moved on though.
Not sure if it’ll go any further.

That’s not what the investigation found.

They checked 29 tracks where they race, and 1684 garage stalls, they found only 11 total ropes that had a pulldown rope tied in a knot, and just one noose. In Bubba’s garage.

Lot to play out, but currently Pennsylvania is the state that gets Trump / Biden over the line for the win. Biden is WAAAAAY in front.

Trump will do something crazy to try and divide the voters back to him.

Three Pennsylvania polls out today, all good for Biden, that have closed the gap a bit between the Electoral College & the popular vote. PA, where Biden leads by 8.1, is the current tipping-point state. We have him up by 9.5 points nationally. projects.fivethirtyeight.com/polls/presiden… https://t.co/9dCiRkF0GL 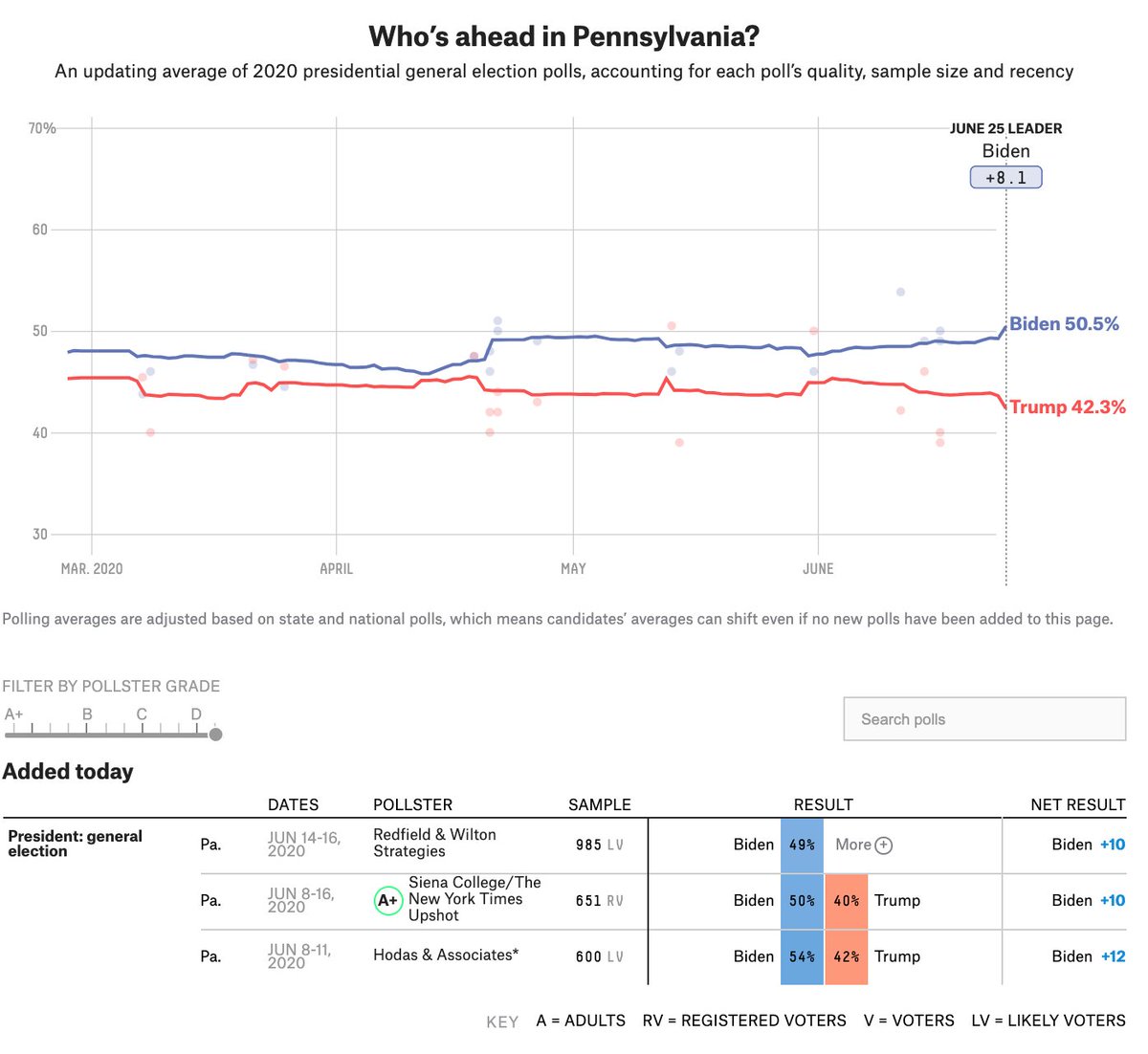 Edit - a huge margin in the tipping point state means a massive electoral college win as many others would fall as well.

Amazing. Truly amazing. I don’t know if I’ve ever seen a candidate in my lifetime who had to do less to win an election.

Really says a lot about the other guy, doesn’t it.

In all honesty Trump didn’t have to do much to do well out of the pandemic.
Just listen to the scientists, follow their advice, then when it’s under control focus back on the economy.
He didn’t even need to be ‘sympathetic’.

Almost every leader around the world improved their standing with their citizens. Even Boris Johnson. For Trump to lose voters, shows he’s just out of his depth and not capable of caring about it.

The rally around the flag effect is really easy to get. Do what the public expect. Let the experts take the lead and then take credit.

I was there for the 2016 election. Went to a bar to watch the results - was so excited to see the first woman president. And then all hell broke out.

I’d booked to go there this year, in time for the election. Kind of gutted that I won’t get to see him voted out.

Then again, he could win it and I don’t think even American is prepared for that.

I think i said at the time that the 2016 election was between Clinton, who represented a lot of what was bad about the existing system, and Trump, who represented a glimpse into a new and much scarier system. It was, in a way, an election between change and more of the same, and enough Americans decided the system was broken and change was worth the risk that Trump squeaked over the line.

Ironically, i think Biden’s sheer unadventurous boring oldness might actually be an electoral plus for him now. I reckon a whole lot of people pulled the lever for Trump thinking ‘at least he’ll shake things up, how bad can it be?’ and they’re now thinking ‘oh, THAT’S how bad it can be, can we have a boring president for a while please?’

Doesn’t change the fact that the US has serious structural problems (which predate Trump) and I’m not sure Biden is up to fixing them (which might lead to the election of Trump mk II down the line), but in the short term, a bit of marginal competence and sanity would be a profound relief.

I was there for the 2016 election. Went to a bar to watch the results - was so excited to see the first woman president. And then all hell broke out.

I’d booked to go there this year, in time for the election. Kind of gutted that I won’t get to see him voted out.

Then again, he could win it and I don’t think even American is prepared for that.

Probably a good thing not being there just quietly

I agree. Particularly as I was going to spend most of my time in Florida!

Back in Feb/March I was a couple of days off booking six weeks there over August. Spitting I had to cancel (AGAIN) a holiday I’ve been trying to have for coming up on 10 years now, but looking at it objectively, i probably dodged a bullet…

Yeah, I had booked a trip there too and the US airlines are still refusing to give our $ back

You be the screaming douchebag that the Dump is, and has always been, … and just be given enough rope.

I agree. Particularly as I was going to spend most of my time in Florida!

I love tassie, but if it sank tomorrow I’d move to NY in a heartbeat.