Football Discussion Stargazer Memorial EFC History Board
theDJR May 23, 2021, 6:17am #1

Follow the link to watch the videos. As mentioned yesterday, he was the sole remaining player from the 1946 and 1949 premierships.

Surrounded by family, Lambert passed away peacefully on Saturday morning at the age of 99.

The Bombers champion had a stellar career for the red and black in arguably the club’s greatest era, but it was a tenure that was impacted by war. From 1942 to 1945, he served in the army in Papua New Guinea and throughout the Pacific.

Upon his return to Windy Hill, Lambert moved to the half-back flank where he continued his dominance. He was rarely beaten and was a fierce, fearless, but fair competitor throughout his glittering career.

Lambert starred for Essendon in three premierships, across the backline with stints in the midfield, and was a mainstay of the line-up in what was Essendon’s greatest period.

Across his 99 games for the club, Lambert was regarded as perhaps the best half-back flanker of his era as he starred alongside fellow legends ■■■■ Reynolds, Bill Hutchison and John Coleman. Among his career games were 21 finals, with Lambert in third place behind Reynolds and Hutchison for the most finals appearances by any Bomber.

“On behalf of everyone at the Essendon Football Club, we extend our sincere condolences to Harold’s family as we learned of his sad passing,” Brasher said.

“Harold was our oldest living premiership player and a true treasure of the Essendon Football Club. He was an outright champion of our club and his contribution profound.

“Despite his years away from football to gallantly serve his country, our game was better for his outstanding service in the red and black.

“After a stellar career as a half-back flanker across three premierships and 21 finals appearances, he was rightly named as the 25th champion of the Essendon Football Club and will forever be immortalised.

“It is a sad day for our football club.”

Essendon’s players and staff will wear black armbands on Sunday afternoon at Marvel Stadium against North Melbourne in honour of Harold Lambert. 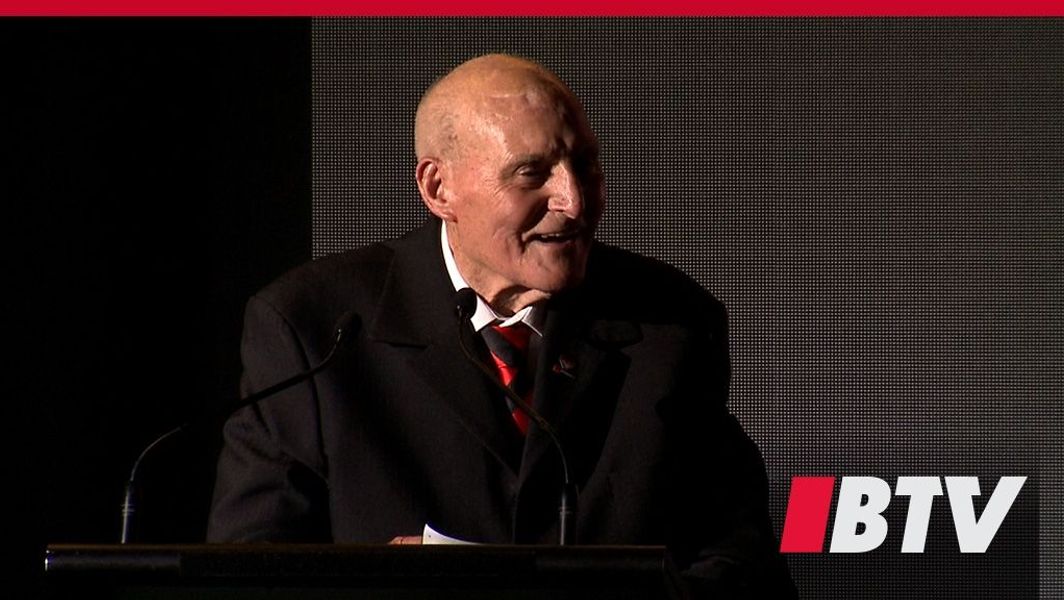 Team of the Century

That’s one hell of a CV. What a champion. RIP old mate.

What a life, what a champion, rest peacefully.

Harold Lambert, who died on May 22, had one of the more unique VFL records.

After reaching a preliminary final with Essendon in his debut season of 1940, Lambert never missed the Grand Final in his seven remaining seasons in 1941 then 1946-51, winning three flags and drawing one GF.

A brilliant half-back flanker who was named in Essendon’s Team of the Century, Lambert also served his country at war with great distinction from 1942-45 in New Guinea and the Pacific.

And his games tally? Ninety-nine, the very same number as the age at which he died.

(just posting this bit in here from the F/S thread)