I rang the club and they told me its on at 1pm on Saturday at the high performance centre.

If anyone hears anything to the contrary plese post.

Hope to see lots of you there.

I thought it was away at Richmond?

I rang the club and they told me its on at 1pm on Saturday at the high performance centre.

If anyone hears anything to the contrary plese post.

Hope to see lots of you there.

BTV: Melksham ready to returnJake Melksham speaks to BomberTV ahead of his first match of 2014 on Saturday.

The pair will play their first match of the pre-season on Saturday afternoon in the VFL team‘s first hit out of 2014.

Melksham is excited about taking to the field for the first time in 2014.

â€œIt is always hard to watch the boys play in the NAB Challenge games and not play so I am itching to get out there,â€ Melksham said.

â€œI have been training with a lot of the younger guys this week with the senior guys playing and it has been good to get a feel for the way they play.â€

â€œSome of the new guys will be playing their first games to so that will be good to see.â€

Fans are urged to come and watch the team in action from 1pm on Saturday with a number of young Bombers set for their first match for the club.

Shaun Edwards, Orazio Fantasia, Johnny Rayner and Patrick Ambrose will all be playing their first match for the club as senior listed players.

Star VFL recruit‘s Josh Mellington and Aaron Heppell will also be among the extended team to take part in Saturday afternoon‘■■■■■ out.

The club‘s new Bomber Shop HQ at the True Value Solar Centre will be open from 1pm for fans to purchase the latest official merchandise direct from the club.

The Bomber CafÃ© at the True Value Solar Centre will be open from 12pm for fans to purchase food and beverages.

Please note the membership department will not be open on Saturday. Fans are encouraged to head towww.membership.essendonfc.com.au for all membership enquires.

Fans are encouraged to allow time to find parking in the areas surrounding the facility as there are limited parking facilities on site.

I thought it was away at Richmond?

Yeah just worked that out, missed the VFL part. Thanks

I thought it would be a good idea to have the membership dept open there during the game. They might pick up a few.

There again, they have probably done the math on it. Make more out of the coffee perhaps.

Who's there? DJR?? Rolling commentary?

Here on the rocks at the northern end with Jackie. Don’t expect us to know all the players…

Dell rove for first point. Slight wind to north with us.

Sandy reserves playing with themselves on the second oval.

Couple nice touches from TIPPA on the back line.

A legit lead to space by 57 sets up our first goal. 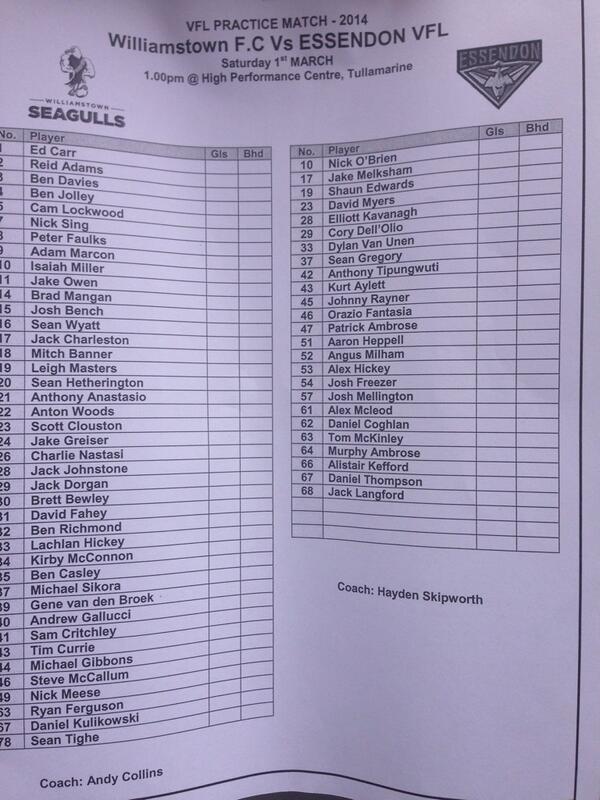 Great chase and tackle by KAV on the wing leafs to 66 mark and point.

Ruck 52 doing alright around the ground.

Heppell roves in square and goals. Maybe 5 touches so far.

Very good pressure from us.