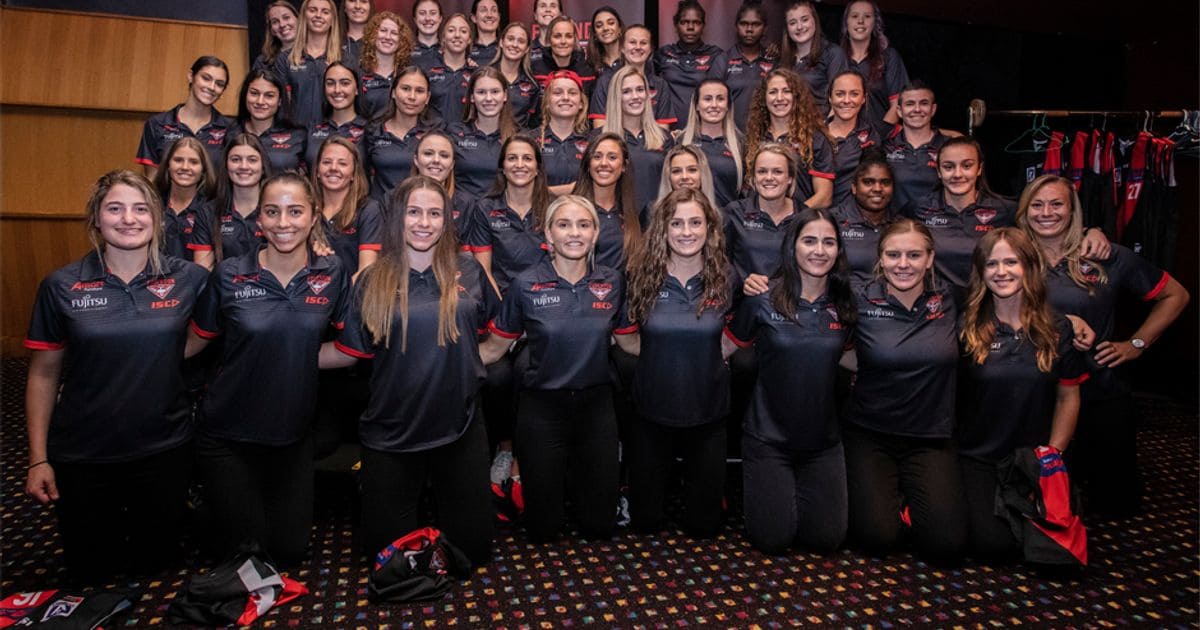 Essendon's 2019 VFLW squad has been unveiled ahead of next week's season opener against Casey.

Families and partners attended the unveiling at a jumper presentation at Windy Hill this week, with inaugural VFLW president and Essendon board member Katie Lio in attendance.

After a challenging pre-season that included losses to Southern Saints (58 points) and Hawthorn (82), the VFLW Dons will be looking to build on their 2018 season.

Major said his side was looking to take the next step forward after last year’s inaugural season.

“Moving into our second season, our players have solidified the teachings of last year and they strive to develop and improve,” Major said.

“We’ve had a few players come in, with what I’ve considered to be genuine outside speed in Marianna Anthony, Libby Hosking, Courtney Ugle and Ruby Svarc.

“This pre-season has been a really long one, it’s been gruelling, it’s been relentless, and their preparation has been exceptional.”

Essendon’s 2019 VFLW squad will feature an exciting mix of youth and experience.

Seven former AFLW players have been selected, including Isabel Currienti and Maighan Fogas, who both spent time with Geelong.

Former Western Bulldogs VFLW player Elise Muller was one of many players to make the move to Essendon.

“It’s about having the community embrace your identity and that’s why I made the move to Essendon, and it really confirmed that I made the right choice the second I stepped into the door,” Muller said.

“To stand up here and be named captain is an absolutely amazing achievement for myself, but an absolute honour,” Ugle said.

“(Pre-season) has been absolutely hard work. We’ve had some pretty tough sessions and to see the girls pull through those tough times really makes me admire the group we have. I’m just excited to see what we can do as a collective come round one.”

This season will be Ugle’s first time leading the VFLW group as captain.

The 23-year-old played a vital role in the Bombers’ 2018 season, averaging 15 disposals and five tackles from her 13 games.

“I think the biggest thing that I can add to the group is that I genuinely care for the girls here and I really like to bring out the best in each individual and I think I play that role really well,” she said.

“The best thing about the group is that we’re not stuck in our own ways, we are open to learning and I think that is an exciting thing because the vision that this club and the coaching staff has is very exciting.”

Major said he was looking forward to seeing what the new additions would bring to the squad in 2019.

“We’re actually seeing consistent development from the whole group, so everybody has bought into the program, everybody has worked, and it’s really shown up on the track,” he said.

“The development of strong leadership will lead the group to great things this season.”

VFL operations manager Ash Brown said developing rookies such as Stephanie Hird (daughter of James Hird), Carla Rendelmann and Georgia Harvey would still have the opportunity to be selected this season.

“Certainly, throughout the year, we’re going to need some great quality people that can potentially come on and play a role on our list and I’ve got no doubt that these women can do that,” he said.

The Bombers will host Casey on Saturday, May 11, in what marks the first of eight home games at Windy Hill.

Victoria Raptis is in the final year of her Bachelor of Communications (Journalism) degree at RMIT University. As part of their strategic partnership, Essendon Football Club and RMIT University are committed to providing opportunities for students, staff, players and the wider community. 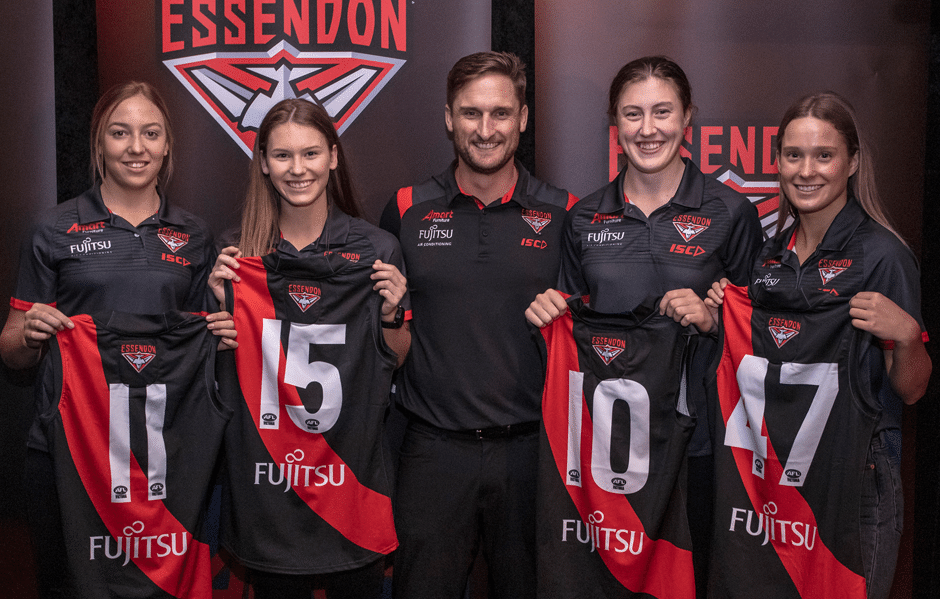 Essendon's 2019 VFLW players receive their guernseys in a special event at Windy Hill.

Similar to the VFLM page earlier, big shots of (nearly) everyone so you have no excuse for not recognising anyone. New VFLW skipper Courtney Ugle says she is “over the moon” to take the reins in 2019 as the Bombers look to take their game to the next level.

Ugle was announced as the replacement for departed former captain Lisa Williams at the club’s jumper presentation this week and she said it was a massive honour to be voted into the role by her teammates.

“I don’t necessarily think of it as me leading the side, but I sure as hell have so much pride that my peers have trusted me to be the one to have that title next to my name,” Ugle said.

“I’m just absolutely rapt, over the moon and just honoured.”

Emulating the efforts of Williams in the side’s history-making season in 2018 will be a key goal for Ugle as she watches over the next chapter for the team.

“I spoke very highly of her at the presentation, because she deserves so much praise. As a person, she has amazing qualities and traits and she definitely brought that into her captaincy and leadership.

“It’s something I admire so much and I hope I can have the same impact on other girls that she had on me.” UgleSkipper_webimage.png804×561 271 KB
Ugle addresses the side after being announced as the club’s second ever women’s captain. (Image: Ben Johnstone)

A former captain of her previous home state of Western Australia, Ugle’s leadership style is one of genuine care.

“I think what I can bring to the group as a leader is that I really want to bring the best out of each individual and I think that’s the role I’ll play regardless of being involved in footy or not.

“I really want to bring the best out of people and it’s exciting to see the development and growth of any individual.”

Ugle will be joined by vice-captains Hayley Bullas and Simone Nalder, and experienced Dons Kirby Hicks and Kendra Heil in a versatile leadership group this year.

“Regardless of the title that’s next to my name, it doesn’t mean that I call the shots or I’m the one who says how things go, because that’s not what I think a leader is.

“It is just a powerhouse leadership group and I have full trust and faith in the group that we will carry this team as a collective.

“It’s super exciting and I can’t wait to see them shine as well.”

Ugle has achieved a remarkable amount at just 22 years of age and having arrived at The Hangar just days before the start of the season last year as she chased her footballing dreams.

She was among the standouts for the side in 2018, finishing second in the best and fairest and impressing with her athleticism and leadership.

Her latest achievement claiming the captaincy is simply the cherry on top of a sensational 12 months since packing her life up and moving to Melbourne.

“I’m definitely not one to ever pump my own tires. I keep saying I’m so lucky, but I think I have to start saying that I’ve worked hard.

“I’m very proud that I can represent myself, my family and my parents with all that I’ve done in this short time.”

Bullas was full of praise for her new skipper, who she said is a terrific person for the young squad to look up to.

“From her coming in two days before the start of the season last year to now leading us is pretty incredible,” Bullas said.

“She has worked super hard to be where she is at and it’s a testament to her.

“She’s paved the way this year and she leads by example and I think that’s why a lot of girls have chosen her to be our skipper, she’s just a great role model for everybody.”

The Bombers’ season will kick off next Saturday against Casey Demons at Windy Hill from 11:30am.

Georgia Patrikios from this video is now #44 too.

Michaela Long is goneski then? Didn’t sound like she & the coaching staff were really seeing eye to eye on a lot of stuff last year, so maybe not a surprise.

Unfortunately not in the squad this year, no. Cecilia McIntosh (born 21 June 1979) is a leading Australian athlete who won a silver medal in the javelin throw at the 2002 Commonwealth Games, represented Australia in bobsled at the 2010 Winter Olympics in Vancouver, was a runner-up at the 1997 Australian Weightlifting Championships and is an Australian rules footballer who plays for Essendon in the VFLW. She played for Collingwood in the AFL Women's competition (AFLW). McIntosh was born in Victoria, Australia and hails from the eastern Me... Essendon has unveiled its 2018 Dreamtime Guernsey ahead of the annual Dreamtime at the ‘G blockbuster against Richmond at the MCG on June 2.

There are 33 (male) Puruntatameris playing in the Tiwi League. Finally we’re making inroads on that front.

Williams, Morecroft, Ponter, Moreau (who played in last week’s intraclub?) and Mackrill out are massive losses, though.

Others missing that were good contributors last year include #1 Trend and Anwyl, and veteran stability also came from Hardy and Hetherington.

Hopefully it’s the first of many, VFLW beating AFL to the punch on the Tiwi academy!! Great to see

You can see that our VFLW development rookie Stephanie Hird has trended upwards from 3 games in Old Geelong’s Women’s Development Div 1 in 2017, then in 2018 into Premier B Reserve for 7 games and getting 4 games in Premier B in the same year, this year she has stayed in premier B so far (I think it is their highest division), with her first game in that divisions best players this year.

I wonder if she will step up to VFLW next year? Anyone know how she is going? @Catherine_Lio ?