Looking at the other scheduled games, if we win this game we are an excellent chance to enter the top six for the first time in our history.

The Hawks have easily beaten us in our three previous matches (21-60, 14-41, and 20-56) but appear to be on the slide. They went from premiers in 2018 to missing the finals in 2019. They lost their captain (Jessica “No Longer #1” Trend, who played with us in 2018) to an ACL injury in round one, and last week the returning-to-footy Abbey Holmes was “managed”. Dominant full-forward Sarah Perkins, who has picked on us in the past, is off playing AFLW for the Suns.

In Round 1 the Hawks got belted (30-66) by Footscray, who in turn got belted last week. After making seven changes to their team, in Round 2 they had a 49-26 win over Darebin (who you may recall we beat during the pre-season 78-18).

That win was spearheaded by Jessie Williams kicking four goals. She’s ex-AFLW with North, has a soccer background, and while I can’t find a height doesn’t look too tall.

They sit a small amount of percentage behind us on the ladder.

Stepnell and Cornish, thank you for your rucking service this past weekend, but I think we’re about to upgrade…

Three #VFLW matches on WARFRadio.com this weekend! We begin with FRIDAY NIGHT FOOTBALL from VU Whitten Oval for the Dogs v the Pies. Then Saturday, we're off to The Hangar in Tullamarine for the Bombers v the Hawks, and finish up at North Port Oval for Port v Willi. https://t.co/NZP8peo55B

Ugh, other side of the world.

Ping me when we are back to this side of the city!

Casey is not part of this world.

Sure, but it’s still closer than Tulla.

Shame you’re not coming: I think I’ll be needing an umbrella gofer when the rain hits…

Could mount it on a tripod!

I believe my tripod may be a lot shorter than yours… 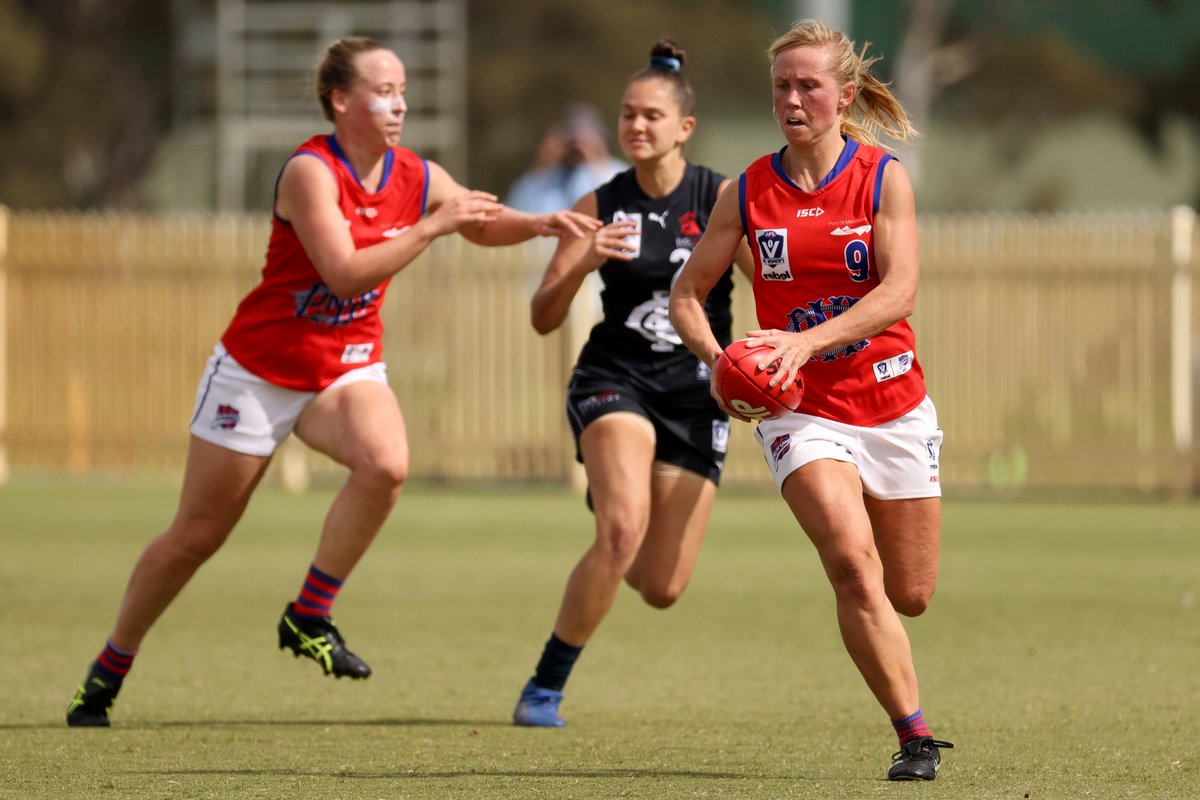 Yay! One hand for umbrella, one hand for binoculars, you can call it yourself at home. In: Nalder, Hosking, Snell (debut)
Out: Cornish, Caruso, Dicker (all named as emergencies)

Cornish was decent last week as backup ruck, but she’s no Nalder…

Snell is an 18yo (until Sunday!) at Bendigo Pioneers who was named on the bench for the NAB Girls Team of the Week last week. Some words on her below:

“A clear standout for the Pioneers and put together a massive four-quarter effort. She kicked the opening goal of the game on the run late in the first term, and was a huge reason why the Pioneers skipped out to a quarter time lead. At times she still rushes her kicks, but her work inside and athleticism to break away from the contest is fantastic, and she just keeps cracking in, often winning free kicks for her efforts be it a run-down tackle or being caught high. Boasts really strong athletic and defensive traits, and capable of hitting the scoreboard.”
+
“The midfielder/forward showed clean hands and a clean set of heels with high-level agility around the stoppages. She rushed some of her kicks under pressure at times, but she put together yet another four quarter performance. Snell is one of those players who once she can find an exit, is hard to stop due to her speed/agility combination. Just continued to crack in and do what she could on the inside for her team.”
+
“Won plenty of footy on the inside throughout the day, quickly getting the ball moving with kicks forward out of the contest, allowing Bendigo’s outside runners to get onto it or their marking forwards to make a contest. Snell was also the standout tackler for the day.”

So put Snell down as replacing Dicker. Is a goal-kicking midfielder (19.3 disposals, 8.7 tackles, and 1 goal per game this year – sounds like selection on merit to me!). She is the top-ranked top-ager in the Girls B&F presently (11th overall, only behind Prespakis on our list).

Hosking back after a week out. Not convinced she’s better than Caruso (in for balance/a specific match-up?)

Abbey Holmes has not been named for the Hawks.

P.S. For those wondering why Nalder didn’t play the last two weeks: she was getting married. Presumably that was scheduled well before the VFLW season got pulled forward!

Geez!!! That’s one hell of a classy interchange bench we’re running with

Barrack hard DJR while I’m on assignment at the Gold Coast until 21 March.

Having the captain, vice-captain, and nominal third-best player in the league (all in great form) on the bench is extracting the urine a tad.

Otherwise, quite sensible, apart from putting Clifford in a pocket.

I heard @saladin has a nice new lens to use?

I heard @saladin has a nice new lens to use?

I just include this here so I don’t have to look up their changes. 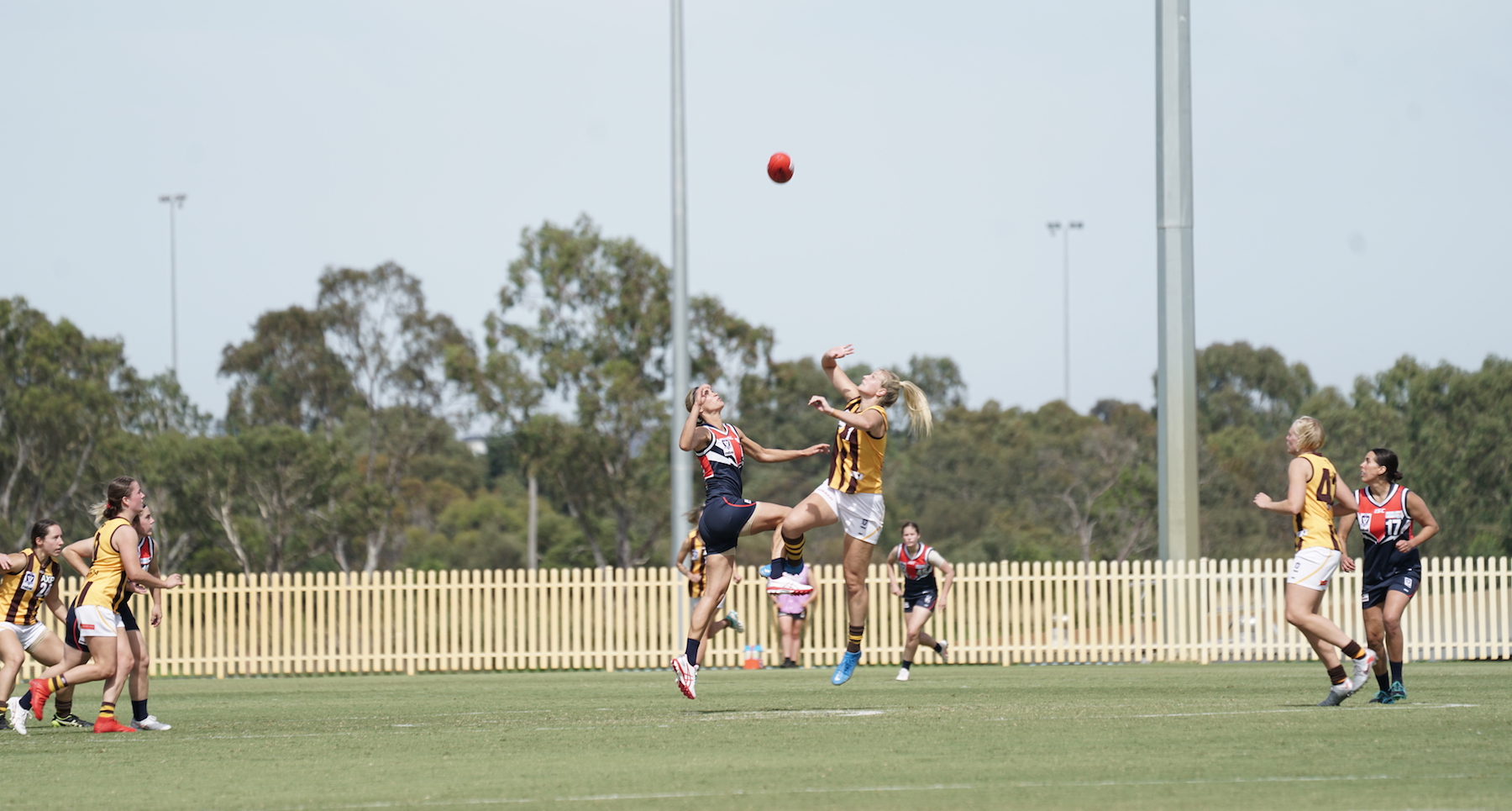 THE 2021 Victorian Football League (VFL) Women’s season rolls on into Round 3 this weekend, starting tonight as the Western Bulldogs host Collingwood in a Friday night showcase. Elsewhere, traditional rivals Port Melbourne and Williamstown face off...

Essendon vs. Hawthorn
Saturday March 13, 11:00am
The Hangar

Two Round 2 victors with some momentum behind them in Essendon and Hawthorn do battle at The Hangar, kick-starting a string of five Saturday fixtures. Both sides are standalone entities and got on the board last week after opening round losses, making this clash between traditional rivals an intriguing one based on form alone.

Essendon looks poised to make three changes, with Simone Nalder coming in for her first game in the ruck, while Elizabeth Hosking returns to her half-forward spot in the famous sash. Bendigo Pioneers product Elizabeth Snell has also been named, a reward for her promising NAB League form so far in 2021.

The magnets are also shuffling at Hawthorn, as the brown and gold side prepares to make four changes. A trio of Eastern Ranges prospects exit after debuting in Round 2, with the likes of Dominique Carbone and Alexandra Cuss set to make their returns to the starting lineup. This could prove to be one of the closest games of the weekend.

Looking like we might just get the game in before any significant rain hits. The team that wins the toss should kick south with the wind – when the change comes through the wind will swing around. Snell (I assume) is pretty light but has good hands and kicking.