If we beat them again, we’re likely to go to third place because Geelong (3rd) and Casey (4th) are playing each other, and percentage-wise they’re both basically a single goal ahead of us.

Elsewhere, it’s likely Fark Carlton will get kicked out of the six (Pies beat them, Saints beat Willy). Good riddance.

Last round the Hawks were easily beaten by Fark Carlton 65-35 – that is deceptive as the score was 64-10 at three-quarter time! Given the game was played at Princes Park you wouldn’t expect that to be a story of wind advantage.

Video streams yet to be announced.

Luckily, 3DJR exists, and actually bothers to tell people that they exist.

to avoid disappoint radio DJR, the vflw/vfl site is lying to everyone.

Game starts at 10am! See you there.

Next you’ll be telling me that every game after this week will NOT be played at 00:00 Saturday!

I don’t know what to believe anymore.

Calder girl Kasey Lennox (174cm KPD) has been named in the squad. I can’t see the positions on my phone so don’t know if she is in the 23 or an emergency.

DeMatteo is off the emergency list - the two of them may be the only change?

There are three changes, including the addition of two Calder girls.

Lennox (HBF) replaces Crook (listed as an emergency, though).

The enigmatic Quigley is out entirely and replaced by in-out-in-out-in Hosking.

It seems a lack of injuries is forcing some interesting changes.

AshleyCooper swaps position with Julian (i.e. she moves from defence to midfield).

Otherwise, much the same setup as usual.

It’s round six and Abbey Holmes has played just one game for the Hawks.

Here are the changes since our 8.7.55-3.9.27 victory over them just four weeks ago. The Hawks have replaced 10 of their 21 players, and 8 of them also didn’t play in the last round vs Carlton. Yowsers.

OK, this makes it look a lot less awful for them. Let’s hope Essendon is only raiding the good AFLW teams, so delayed for another week or two 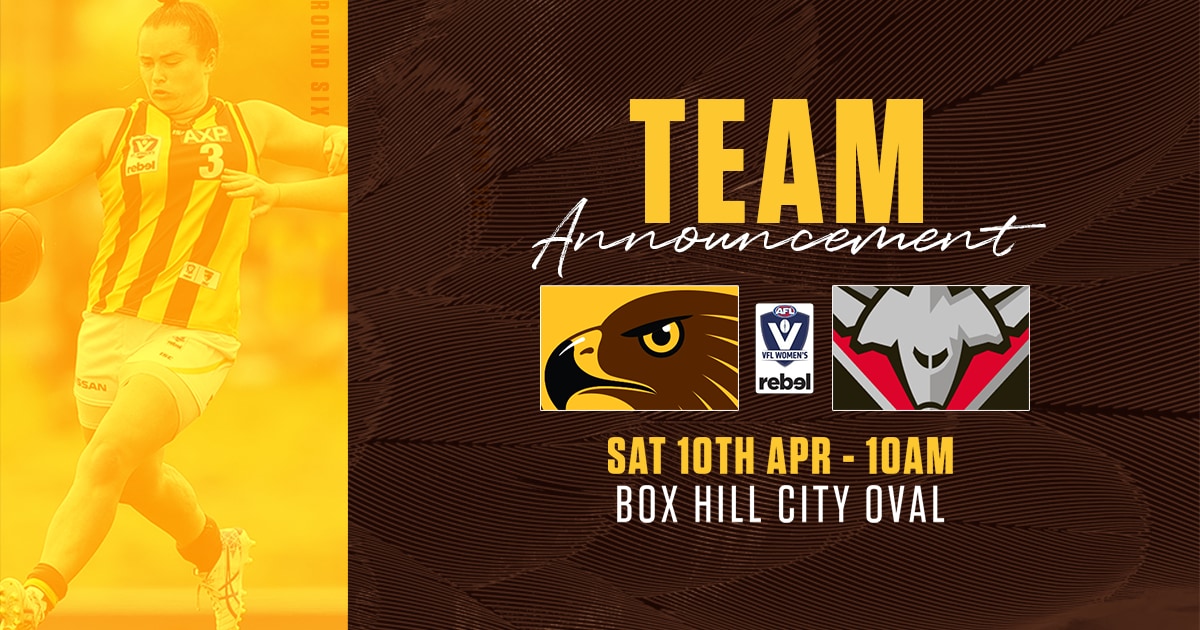 The official AFL website of the Hawthorn Football Club

One of the most anticipated players to return is defender Tamara Luke from St Kilda, a former captain and 2018 premiership player for Hawthorn.

Luke is just one of the experienced group of AFLW players joining the Hawks, with Nicole Garner (Geelong), Georgia Bevan (Gold Coast Suns), and Nadia Von Bertouch (St Kilda) also pulling on the brown and gold jumper for the first time against the Bombers.

Two young players from the NAB League, Eloise Chaston and Ruby O’Dwyer, will also be making their debut in the brown and gold, with coaches already calling them future AFLW stars in the making.

Garner and Bevan are midfielders.

von Bertouch is a tall (176cm) forward/utility coming off many injuries.

Has rained overnight, but dry and windless right now. Forecast is for persistent light rain and a decent wind across the ground…

Georgia has her right calf taped. FWIW, all three of the new AFLW-listed Hawks are, in fact, no longer AFLW-listed. All cut by their teams.

Friswell warming up with the forwards. Frew looks set to start there too.

As usual we were first out, last in. OMG they’re so polite. Every single returned ball gets a smile and a “thank you”.