Ah, that's beautiful. Mine is green, as it seemed to be the only one I could buy in Japan. But I like it now. That one has the speed switch, right? I have to lift the platter and change the belt manually. All part of the hands on experience!

Correct.
Changing the belt is so easy, but with an equal number of LP’s and 45’s, and having a 13yo who will be using it, I thought it might be a handy feature.
I knew that eventually I would want to upgrade to the Acrylic Platter and the 2M Red cartridge, so thought what the hell, spend the extra money now.

I’d guess on your machine, you have the Ortofon OM10, though you may have the Red Cartridge, as I noticed a number of Overseas sellers had upgraded the Cartridge.
When you require a Cartridge change or Stylus change, it might be an idea to upgrade your table to the Ortofon 2M Blue.
Not a ridiculous amount of money that would yield definite improvement in sound.

Yeah, it's got the 2M Red. I'm not that fussy about minute sound definition, I just wanted a decent modest setup, but when I drop the needle on certain things I freak at how good it sounds. My fave New Order 12"s sound phenomenal. The neighbours hate me.
mrjez March 2, 2017, 12:56am #22

I recently took this photo to accompany an article I wrote for my friend’s craft beer mag, on pairing albums with beer. It shows some of the prized vinyl in my collection. Props to those who can name all the albums from the obscured artwork!

I recognize the Clash and maybe another but we probably have mostly non-intersecting tastes.

No one has mentioned 78 rpm records yet… I have about fifty, including some that have taxation stamps attached (that is history most would not know about!) These 78s have 1 song per side. You can see why they were killed by the 33 rpm LP.

I kinda just missed vinyl, as CDs were the thing by the time I started buying music.

My parents did have an old turntable, but apart from a few Beatles records, it was mainly garbage. (My parents had sh*tty music tastes.) Although, mum did have the ABC call of the 1984 Grand Final on Vinyl, so I gave that a few runs during school holidays.

I do have this weird memory of listening to a Darryl and Ozzie record as a kid. Quite a lot in fact. In hindsight, listening to Darryl Somers sing Puff The Magic Dragon is an obscure childhood memory to have.

But yeah, if I was even 5 years older, I would have been all over this thread

Thanks for the thread

, and the technical info of which I have limited knowledge. I used to have a couple of hundred vinyl LPs, now only about 70 since moving to QLD. I have recently rediscovered these after 15 years without a turntable. Bought a cheap 2nd hand Aiwa for FA a couple of months ago and love it. Will upgrade when i have the room to justify it. I kept what i thought were the most important, including in no particular order:

In the words of the infamous and dubious, ‘such is life’…

For those looking for good vinyl shops, Goldmine are fantastic. Original store in nth Carlton, and a newer store in Fitzroy.

ill communication
nevermind
is this it
fear of a black planet
psychocandy
disintegration
mrjez March 2, 2017, 12:57am #29

Low = one before nevermind

The pink one is really annoying me. Will have a closer look on my laptop when I get home.

The pink one is really annoying me. Will have a closer look on my laptop when I get home.

Is it Ten?
Sorry for swooping if so.

Nah, not Ten. But the same year I think.

Nah, not Ten. But the same year I think.

Jack White got me into vinyl records and I’m grateful he did.

He puts it so simple and accurately IMO: “It’s like a bonfire.” It’s a different experience. People talk about how it sounds better, but that’s all in their head. Play a CD on a good sound system and it can’t be beaten. The thing is, people don’t. It’s either streamed, ripped off the radio or played through ■■■■■■ laptop speakers or iPhone earbuds.

To play a record you have to respect it. No one plays their turntable through their laptop speakers. No one can be bothered putting a record on only to go and do something else these days. If you’re doing something else, use Spotify. I love putting a record on, sitting on my beanbag (I know, I’m such a student) and just looking at the artwork and listening to the lyrics properly. When you get half way through the record you have to flip it, it’s engaging.

My collection is modest, I’ve had my turntable for about 18 mths 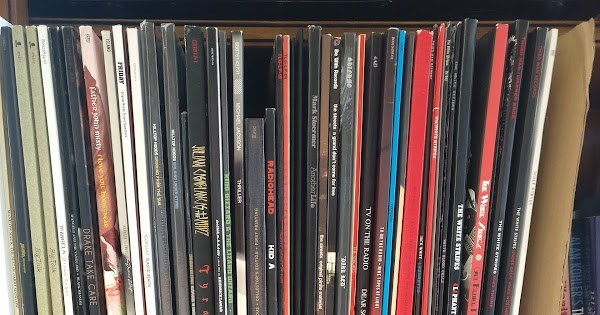 (How annoying - Google Photos backup doesn’t give a .jpeg link)

(Pardon Hilltop Hoods, I got those records on the cheap so they can be re-sold.)

Albums that I think go to another level played on vinyl and loud:
The White Stripes - Get Behind Me Satan
D’Angelo - Black Messiah
Weezer - Blue Album
Weezer - Pinkerton

On the other hand TV On The Radio - Nine Types of Light was fkn disappointing for one of my favourite ever albums - ■■■■ pressing.

Also @wimmera1 my research has told me that despite being nice pieces of furniture those all in one units have terrible actual turntables in them with crappy heavy cartridges and poor tracking which will tear up your records really quickly. Your cheap turntable/stereo will be even worse. Anything off Gumtree is better than the new stuff unless you go super expensive (~ $100) from what I read (I bought new personally but it was expensive)

There’s a huge degree of sentimentality involved either way. I’d keep one in my house just as a relic/whatever else you want to make it.

I reckon you could also modify them - keep the exterior aesthetic and drop a brand-new turntable in there.

I enjoy nostalgically using my turntable every few weeks or so precisely because it’s nostalgia, and because my grandson likes to see the Sesame Street LP spinning round and round. But as someone who just has to listen to music everyday, I remember when I was a slave to vinyl and what a ■■■■■ master it was. Where do I start? Having to turn the ■■■■■■ things over every 20 minutes or piling them one on top of the other and scratching the hell out of them. The ■■■■■■ fluff on the needles that went blunt or snapped because they had to be cleaned all the time, usually in the middle of that special moment - See the Bombers fly UPJJJGJGJGjjgzzzzzzzzzzzzUp Up Up Up Up Up . The records needing to be wiped constantly with the proper cloth to prevent the build up of crap. Oh yeah and the inner sleeves that must have been biodegradable before their time or the paper sleeves that left paper deposits in the grooves that were almost impossible to remove. Or the only player I could afford which one day decided arbitrarily to vary the speed of each track just for the fun of it. And worst of all , the ■■■■■■■ scratches that appeared no matter how careful you were with the ■■■■■■ discs, usually with the most precious LPs, at least with CDs you can save them and reburn them when you scratch the copy in the car cd player. The dedicated collectors I knew bought 2 copies and locked one away, the Grange copy, or they played them once and recorded them onto cassettes- hey why aren’t people nostalgic for cassettes? I’ll tell you why, the art! It’s all about the LP art. But LP art is ultimately like graphics on video games, all wiz bang for the first few spins and then it might just as well be a dos game.
Thank Zeus for CDs, and digital stuff is even better. I just got the new Keith Jarrett 4 CD solo release (at JB Hifi on import of all places after Amazon Germany and UK refused to sell it me and the US site delayed the release but that’s another story)and the first thing I did was rip it! Sounds ■■■■■■■ brilliant to me on my ipod with a decent pair of headphones, to my admittedly damaged ears.

There’s a huge degree of sentimentality involved either way. I’d keep one in my house just as a relic/whatever else you want to make it.

I reckon you could also modify them - keep the exterior aesthetic and drop a brand-new turntable in there.

Yeah they are super nice pieces of furniture. Although it would be a big task dropping another turntable in there would be awesome. Can get something good off Gumtree for 100 quid, which is interesting seeing as your crappy ones from JB are almost twice that and don’t even have a counterweight… I got my Grandpa to get one when I wasn’t into vinyl and feel bad now about selling him up the river knowing he could have spent half the money on something a lot better.