We have found the tunnel. Can we find the light at the end of it!? How the Bombers got back in the hunt

Essendon is back on track after a cultural shift led to a recruiting splurge. Their challenge is make their speed kill. 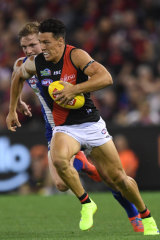 Essendon were happy to pay a big trade price for Dylan Shiel.CREDIT:AAP

In the post-season of 2017, Essendon underwent a cultural shift that has expedited their recovery and, finally, positioned the reconstructed club on the brink of flag contention for the first time since the early 2000s.

Traditionally, Essendon had been wedded to the philosophy of Kevin Sheedy and Mark Thompson – evident in Bomber’s time with Geelong – that you grow your own players, largely via the draft.

Essendon had never traded out of the first round of the national draft until then. Not once since the draft’s inception had the Dons entered it without at least one first-round choice, save the years when they were forcibly removed by salary cap rorting (1999) and the drug saga (2013) – and in 2013, they still plucked Zach Merrett and Orazio Fantasia with later choices.

Hawthorn have held only two selections inside the top 20 since 2009, twice trading top-ten picks for Shaun Burgoyne and then Jaeger O’Meara, with Tom Mitchell also acquired from the Swans at bargain rates (pick 14). Last year, the Hawks traded out again for Chad Wingard.

Critics from rival clubs would say the Bombers had not traded picks because they were harder to deal with than the Senate crossbench. Alternatively, one could say they valued their picks too highly to part with them. Whatever the cause, they did not trade in seasoned quality (Brendon Goddard was a free agent).

But 2017 brought a sea change. By then, the Bombers – with clear air – had recognised that there was now a mixed economy, and that, in a liberalised player market, teams could not solely draft and, further, that the blockbuster clubs could sell the likes of the Anzac Day and Dreamtime games to homecoming Giants and Suns. Thompson’s old club, the Cats, had shifted 180 degrees from drafting to trading, often targeting locals with a yearning for home such as Patrick Dangerfield.

So, in 2017, Essendon traded their first pick to Greater Western Sydney for Devon Smith (Geelong unable to afford him), rolled the dice on the talented, trouble-prone Jake Stringer and beat off Carlton to sign Adam Saad from the Suns.

Last year, they doubled down on needs-based trading, winning the frenzied scramble for GWS star Dylan Shiel, paying the un-Essendon-like premium of two first-round choices for the midfielder.

Of the storylines that were drowned out by the graceless post-game booing, the most consequential were these: that the Essendon Football Club, mired in mediocrity for a long time, appears back in the hunt, and that their conversion to Hawthorn-like trading has hastened their recovery from the debilitating impact of the saga

Shiel, Saad and Stringer were dynamic on Anzac Day. Saad’s willingness to take the game on from half-back and ability to run down opponents were notable, as was Stringer’s mercurial talent around goal.

While it’s true that Shiel butchered several long kicks, he also gained enormous territory – like a punter in American football, he gave them field position, when the ball had been largely confined to Collingwood’s front half.

Saad and Shiel provide a point of difference in comparison with other sides: extreme speed in each third of the field. Behind the ball, there’s Saad and Conor McKenna, in the middle, Shiel and quickish Zach Merrett, with Andy McGrath mixing defence and midfield.

In attack, Fantasia – the major absentee on Thursday – forms a speedy tandem with Anthony McDonald-Tipungwuti. Stringer, too, has a burst of pace that can find him space

No team has every positional base covered and Essendon’s limited depth will not permit too many injuries to their best 20. But they have a sound spine, beginning with Cale Hooker and Michael Hurley and, in Joe Daniher, an athletic 200-centimetre forward who can win games.

Premierships have been claimed lately by clubs that fashion a game style or method around their unique personnel.

For John Worsfold, the challenge is to create a style that takes full toll of Essendon’s speed, offensively and especially defensively. The pressuring of Collingwood from late in the second quarter was instrumental in the fightback. They ran them down, literally and on the scoreboard.

The Bombers have a natural aptitude for taking the game on through the corridor; today, they are in the throes of training a new defensive system, imported from the Tigers via assistant coach Ben Rutten.

Essendon players seemed confused and deprived of ball-getting instincts in the opening two games, losing their bearings on Rutten’s road map. Since then, defensive actions have gradually improved. The extent of that improvement, like Richmond in 2017 and Collingwood last year, will determine how high they ascend. 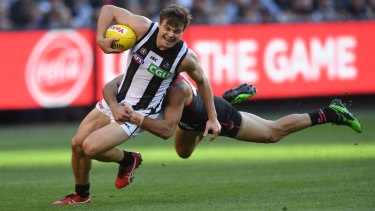 One small additional cost of the saga was that, in the interests of player welfare and with a debt of obligation, the Bombers offered all of the suspended players contracts for at least a season. Fringe players were retained when most clubs would have cut them.

Conversely, the suspensions fast-tracked McDonald-Tipungwuti, Merrett, Fantasia and Darcy Parish, while also enabling them to gain the first pick in the draft in McGrath. The club also negotiated a salary cap top-up arrangement (about $1.7 million) with the AFL in 2016 – had those extra payments been inside the 2016 cap, the Dons would not have recovered for years.

The signature of Hooker was a catalyst for others to stick. Had he taken up a massive Fremantle offer – following the exits of Paddy Ryder, Jake Carlisle and Jake Melksham – the Bombers likely would have been forced in to rebuild mode with a mass of early picks, as some commentators urged. Of the suspended dozen, only Michael Hibberd was lost (to Melbourne).

That the players acquired since 2017 are in the same mid-twenties age bracket as Merrett, Daniher and Fantasia was by design. They have a base to compete for the premiership, if not this year, then in 2020 and 2021, given the requisite pluck, luck and coaching acumen.

Geelong next weekend will be a test equal to Collingwood. Regardless of where the Bombers land, on the field, they’re out of the red and into the black.

Good read, thanks for sharing.

However, its time to move past these ‘close’ losses against top sides (Pies, Hawks, Tigers in the back half of 2018 and Pies this year) and get the 4 points.

This weekend is huge.

Cats rightfully favorites but I reckon we need to win.

Slip to 3-4 with a road trip to Sydney (albeit who are struggling) might spell trouble for our season.

Cannot have an honour loss nor come out flat after a big game which saw us receive many plaudits for our performance.

Mark my words… we will touch Geelong up by 40+ points

Mark my words… we will touch Geelong up by 40+ points Probably would’ve been better if was a img from an EFC v GFC game though?

Slip to 3-4 with a road trip to Sydney (albeit who are struggling) might spell trouble for our season.

we will smoke Sydney. Better. Although I can still see Brad Ebert’s head in the background…

and you wonder why your membership card was delayed

Can see the light if we dish that up week in week out for 4 months, not 4 weeks

It’s round 6 and there is an article about the fact we traded first rounders?

To be fair, you can still see his melon from the moon.

To be fair, you can still see his melon from the moon.

not a small pill. No Brad Ottens but it’s a sizeable forehead.

To be fair, it’s hard to find a photo taken anywhere in south eastern australia that doesn’t have that blimp in the background.