I was at the game and we pumped them and still would have even if that kick of Longy’s had been ruled touched.

But as someone who is pretty good at reading body language, I would suggest that there is no way Silvagni would have carried on like a little girl like that unless the ball actually tipped the top of his finger/s.

If you watch the clip you will see his dramatic carry on at the 0.42 mark. Whatcha reckon? 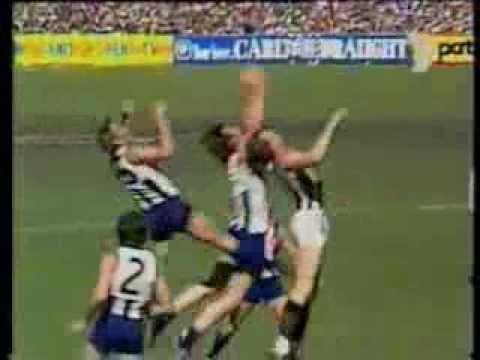 I hope he did.

He touched it, alright. Has confirmed in the past. But still, f**k 'em.

I love they still biarch and moan about it.

Has confirmed in the past

Really??? I didn’t know that. Tell me…When? Where?

He definitely touched it, which is HI-LARIOUS

I hope he did.

Of course he touched it.

That’s what makes it even sweeter.

Also, I don’t quite get the taunting on this sort of thing.
‘He touched it, you know.’
‘Oh, absolutely. And it probably turned the game and we won and you lost. Hahahaha!!!
More than that, it’s constantly replayed as one of the greatest moments in football history. I love it more every time I see it. Everyone does. Except you losers.’

Wasn’t much doubt he touched it - it was just across the line when he did - and not marginally either.

At the 1.09 mark where you see that smug dhead Brereton smirking and showing off. That was the 85 Grand Final which we won by 78 points!!! I was there, close to where Dermie was, and Hawthorn, from memory, had scored the first goal or two(?) Then the mighty Bombers preceded to turn it on! We started flogging them. I was still near Brereton, near the fence behind the goals, I screamed out at the top of my voice, “Give us a smile now, Dermie!!!” All the Bomber fans near me laughed. A magic moment. I will never forget it.

Wasn’t much doubt he touched it - it was just across the line when he did - and not marginally either.

Let’s have a look… 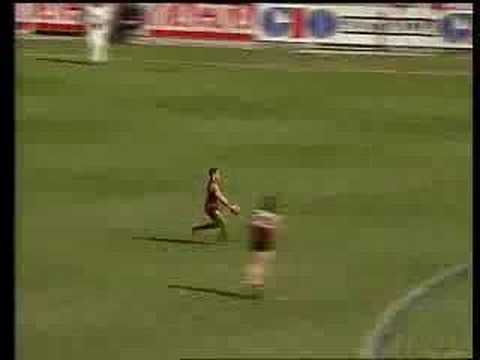 “It may have been touched on the line… No”

How much clearer does it need to be?

They didn’t have reviews in those days.

How sht would it have been if they did. Crowd goes off. Then 5 umpires all come in, discuss amongst themselves, decide a review. 5 minutes of back and forward of footage, no one can tell anything, then the review comes in and they call something that was clearly not possible from the footage and everyone hates.

It’s an absolute blight and ruins some of the greatest moments of the game. That goal umpire knew what it was about “I know this deserves a goal, I’m 100% certain this is a goal, I don’t care how much silvagnis going to carry on. Even better if I smack him in the head with the flags while he’s doing it.”

And the answer is “what does the scoreboard say? Goal? I guess it was a goal then”

The reviews don’t stop them from farking it up anyway because they are corrupt and stupid. What made you come back, VD_sucks?

I was at that end and was sure at the time he did touch it.

What made you come back, VD_sucks?

Covid19 insanity and boredom, bomber girl, nice to hear from you.