If a club needs a smooth moving tall midfielder and defender look no further than Mitchell Hibberd. Hibberd is a player who has overcome great adversity to put himself into first round contention. Last year he battled through injury preparing himself for this year.

He started his year well by playing good footy for the Tasmanian TAC Cup side. He gave recruiters a glimpse of what he could do as a wingman and as a defender. His drive, run and carry and great foot skills are all traits that added something different to the Tasmanian team.

He also was selected to play for the Allies in the championships. He had some great passages of play and showed his dominance in the air taking multiple contested marks.

At the combine he shone with his beep test finishing only second to WA endurance machine Joshua Schoenfeld with a beep test score of 15.4. He also won the kicking test with a score 24/30 which tests uncontested kicking accuracy.

Hibberd is also the ultimate professional in the way he attacks training and rehab. His work ethic behind the scenes is highly rated by the Tasmanian coaching staff and they have been raving about the fact that he has recovered from an ACL in such a way. This recovery has prepared him mentally and physically for the rigors the life of an AFL player and the training expectations. His work on the training track is great and he has been doing the little things to help give him that edge on game day. This aspect is extremely appealing for recruiters and has put him in good stead coming into the system.

His kicking at its best hits targets lace out on his preferred foot. He also shows outstanding penetration on his kick, something that most players don’t have at this age. He also is a great judge of how to weight the kick allowing him to switch the play and create opportunities for their forwards. His kicking when a full speed can be a little shaky at times but that can improve.

One of the most underrated traits Hibberd has is his ability to take great marks. He is very courageous with how he attacks the football in the air and doesn’t mind throwing his body around to try and take a mark. This contested marking edge also suggests that Hibberd could maybe go forward on occasion and use his football IQ and marking snag a few up forward.

Hibberd has also proven himself as a great defensive prospect. His efforts when not in possession of the ball make him even better as a half back. We see on many occasions that he’s willing to make the extra smother, make a spoil or even run down an opposition player. This trait is quite rare for a player who could easily just focus on the rebounding part of his game. This accountability is a big tick in most recruiters books.

The other problem Hibberd has is his size. At the under 18 championships that didn’t affect him because most players are usually smaller than him but at AFL level he will get a big shock if he thinks he can use his body the same way. His body size also has affected the way he has played by not being able to get more of those contested possessions.

At the next level we could see a classy ball user who can play multiple positions on the ground, but clubs will have to be patient. His body will take time, but If he puts the work he could be anything. Jack Crisp is the player I think he could potentially become and aim to play like as that balanced utility who has a great kick. The bottom line is that any club drafting this lad is going to get a great ball user, a true professional, a hard worker and most importantly a player who is willing to do the team things.

Strikes me as a pretty good pick. Why did North delist him though? Was he injured, or just a late maturer?

From memory north played him mainly as a defender…and he was well behind their first choice inside mids.

Pretty happy with this selection. Ready to go mid who loves the hard stuff and can take a Mark. AFL draft 2015: Mitchell Hibberd does it the hard way. Twice.

A doctor suggested he should give footy away, but Mitchell Hibberd persevered, and used his injury lay-off to do something useful.

From Combine Harvester in 2015 (his draft year):

AFL biography: Midfielder or defender who has overcome significant knee and shoulder injuries to play some exciting football this year for Tasmania. Very good athletically and a sound decision maker. Averaged 23.3 possessions (71.8 percent efficiency), eight handball receives and 4.7 rebound 50s in three games at the NAB AFL Under-18 Championships.

“Mitch has had a very injury interrupted last couple of years. He had his knee reconstructed towards the end of 2013 and missed 12 months, then came in for preseason as an overage this year and dislocated his shoulder at training and needed a reconstruction. His first game was a TAC Cup game in May, and he basically hadn’t played for 18 months. I think his ability to be ready to play really well in that game and subsequent games is a big tick for his willingness to work hard and recover. He’s got really good endurance and he’s worked super hard on his speed and agility. He’ll test at around three seconds over 20m which is not elite, but not bad for a 192cm hard running player. Even though he’s 19 he’s still quite immature physically, so he has a lot of development still to go, and certainly a lot of upside. What he is, is a very, very professional kid. He’s been like that since he was 13, he’d be the most dedicated kid I’ve had in my six years here. He weighs his food, he does extra sessions, he’s just one of those kids, and in the end that’s why he got back from his shoulder in six months instead of eight.”

Plus they possibly thought he was surplus to requirements with Luke McDonald, Mullett and McMillan all looking like good things around that time, and recruiting Alex Morgan (same draft group as Hibberd, taken 4 picks earlier) Essendon has boosted its midfield stocks by picking up big-bodied onballer Mitch Hibberd in the NAB AFL Rookie Draft. 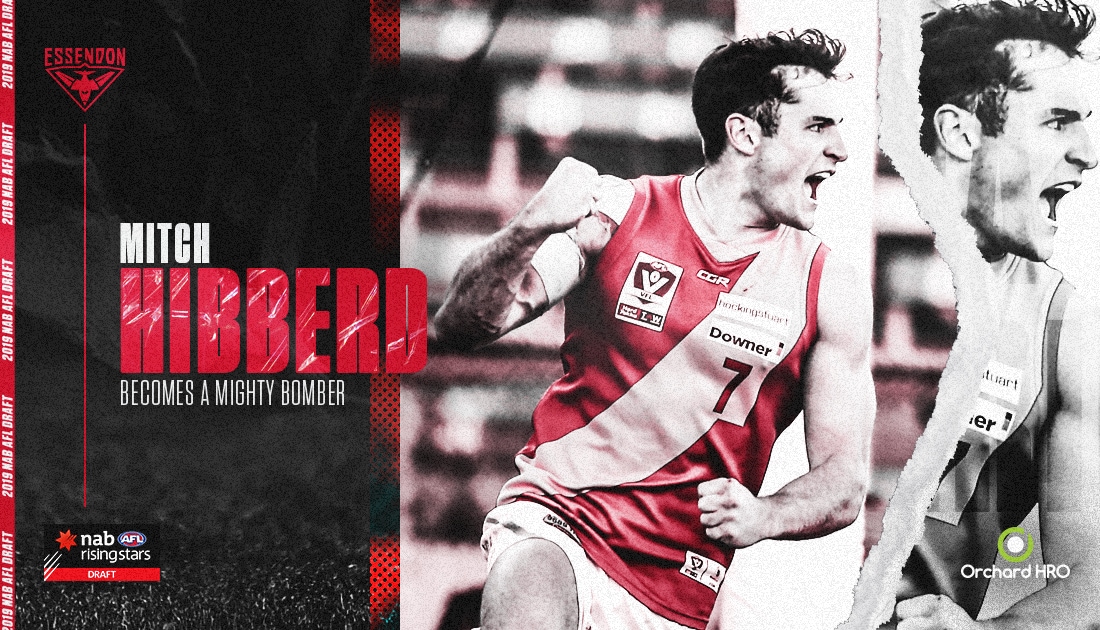 Essendon has boosted its midfield stocks by picking up big-bodied onballer Mitch Hibberd with pick 10 in the NAB AFL Rookie Draft on Friday.

The powerful 23-year-old midfielder played four games for North Melbourne in 2017 before joining Williamstown in the VFL this year where he had an immediate impact for the Seagulls.

Hibberd was among Williamstown’s best players in its narrow loss to Richmond in the Grand Final, racking up 25 disposals.

A strong runner, Hibberd booted 10 goals and averaged 24.3 disposals and 6.9 tackles across his 20 VFL games this year to claim a spot on the wing in the VFL Team of the Year.

Now it’s just a question of waiting until the tacky phone hookup vid gets uploaded to the club’s site.

Is it weird I’m actually looking forward to it?

Could be the best kick in our team. I like this pick. I don’t think North did him any favours.

Just as I thought, when you start at pick 32 the only half decent big bodied mids left available are lurking in the state leagues. Thats what the rookie draft is for.

Good pick-up IMO. Ready made player, might be a late developer. Well worth getting him in, certainly his physical attributes are ones we need. Welcome to Essendon Mitch!

Its kind of funny, same draft as Parish, Francis Redman

North pinch Morgan and he is a bust and delist Hibberd

And we pick up Hibberd now.

Brown and Hartley now gone from that draft too for us anyway.

He is not ancient. 24 is reasonable. might have 6-8 years left in him if it works out…

Now it’s just a question of waiting until the tacky phone hookup vid gets uploaded to the club’s site.

i love those videos!

24 is good. Rookies should be ready to step into a senior side for build, fitness and experience.