CLUBS will be able to select overlooked indigenous and multicultural prospects at this year’s NAB AFL Draft as category B rookies as the AFL looks to fast-track its next generation academy program.

The AFL informed clubs last week it had broadened its academy rules to allow them to select players under the new system this year in a bid to “achieve the outcome of greater diversity” on lists.

Under the revised rules, clubs will be able to apply for 2016 draft-eligible players to qualify as talent concessions under the next generation academy rules.

If the AFL decides that the player meets the qualifications under the indigenous or multicultural eligibility, the club will be able to list the player as a category B rookie, but only if the player is not selected in the national or rookie drafts.

Clubs will need to send their nominations for potential category B recruits by August 15, with a full list to be circulated by the AFL by the end of August. A memo was sent to club list and recruiting managers earlier this month detailing the additional rules for this year.

The category B rookie list has previously been reserved for international recruits or players from alternative sports who have not been registered in an Australian football competition for three years.

The next generation academies, which were announced earlier this year, have seen every club (outside of the four northern clubs) allocated different regions to develop multicultural and indigenous talent.

If the talent is deemed good enough to be picked by a club in their respective draft season, they will be up for grabs under the points-based academy and father-son bidding system on draft night.

Originally the AFL had planned to fully introduce the next generation academy system for next year’s draft, with the category B option for this year’s prospects considered likely to be a ‘one-off’ in 2016.

A player has to meet several forms of approval before being ticked off as being eligible to join a club under the next generation academy rules.

As well as residing in a certain club’s region, to be eligible the player must be born or have one parent born in Asia or Africa; be of Indigenous background residing in a remote region; or have both parents born in a non-English speaking country (not Asia or Africa).

Many clubs have started building their next generation academy operations with talent days for local juniors, with most aged 11-15, where the AFL is hoping to centre its attention on up-and-coming football fans.

Personally, I think this is huge. I’ll be very disappointed if we don’t add at least one player under this rule. It’s a free hit on players who’ve grown up playing football.

Would Ben Long Qualify for our zone - Long is a Tiwi name? He has been requested for AFL draft combine so highly rated.

Kids overlooked in the draft. No worries.

Good initiative from what I can tell.

Another way of watering down the still-huge issue of academy prospects. Yay thanks for giving us a kid that NO ONE ELSE wanted (including us with our last pick) when you are still giving the north eastern clubs free hits at ELITE talent.

Presumably this won’t be the structure once the actual academies are in place, because if it is nobody’s going spend any time on their academy.

Essendon get all the TIPPAs.

Another way of watering down the still-huge issue of academy prospects. Yay thanks for giving us a kid that NO ONE ELSE wanted (including us with our last pick) when you are still giving the north eastern clubs free hits at ELITE talent.

Essendon get all the TIPPAs.

Tippa would have been on our list 3 or 4 years ago under these rules and had the opportunity to train properly all this time.

Mind you it probably made him even stronger having to fight so hard to make the list, but it doesn’t have to be that hard anymore at least.

Anything that allows interpretation is a winner as far as the AFL is concerned. 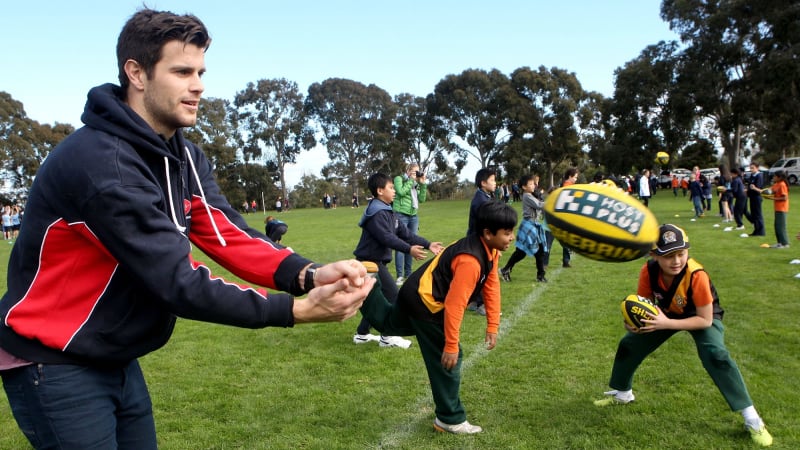 AFL clubs to get free shot at multicultural and Indigenous rookies after this...

Proactive clubs will be given a free shot at a player from their new academy zones this year, in a one-off relaxation of the rookie list rules.

Proactive clubs will be given a free shot at a player from their new academy zones this year, in a one-off relaxation of the rookie list rules.

As part of the Next Generation academies’ roll-out, clubs will have the chance to list automatically a player from their region as a rookie if they are passed over in the national and rookie drafts.

Clubs must apply to the AFL for prospects from their region to be considered, and players must be draft age or older and meet a number of other criteria to be eligible for selection.

Players born in Africa or Asia – or who have at least one parent born there – may be eligible.

So, too, may players born – or whose parents were both born – in a non-English speaking country from another continent.

Clubs can also apply for Indigenous prospects living in areas under-represented in the AFL draft to be considered.

Clubs will be able to add players straight to their list as a category B rookie if they go undrafted, provided they have not already filled their quota of three.

Current category B rookie rules allow clubs to list international players, players crossing over from another sport or players who have not been registered with a football club for three years or more.

If a club decides against listing a nominated player from their Next Generation region, he will be available to all other clubs as a free hit after the draft.

Clubs must apply for a player to be considered by the middle of August, and a list of those approved will be circulated among clubs in September.

From next year, clubs will have access to players from their Next Generation academies at the draft.

They must again apply to the AFL ahead of time for players to be deemed eligible under “exceptional circumstance” rules given the system is so new.

From 2018, clubs will need to nominate and bid for their players on draft night using the bidding system that applies to father-son prospects and those from the four northern academies.

However, they must have applied to the AFL for any players to be declared eligible no later than the start of the year in which they turn 16.

While special exceptions may be made, players are unlikely to be deemed eligible unless they have been participating in their club’s academy for at least three years.

Clubs can pay prospects no more than $25,000 worth of benefits unless the AFL signs off on it, and players who play 10 TAC Cup or state league matches are unlikely to be eligible.

The Next Generation academies were launched earlier this year and clubs were assigned zones throughout the country.

Their aim is to boost the number of players from multicultural and under-represented Indigenous areas being drafted to play in the AFL, increasing diversity across the competition.

Draft numbers from NSW, in particular, have risen significantly in the past couple of years as more players from the Swans and Giants academies have been drafted.

Collingwood has already set about establishing a stronger working relationship with TAC Cup club Oakleigh Chargers, with central Melbourne in the club’s zone.

North Melbourne will run Tasmania, while four clubs (Collingwood, Essendon, Hawthorn and Geelong) will run programs in parts of the Northern Territory.

Other clubs have been assigned areas throughout Victoria, South Australia and Western Australia.

“…players who play 10 TAC Cup or state league matches are unlikely to be eligible.”
That seems like ridiculous rule.
Option 1: you have academy players you’ve put at least three years of development into and they’re not good enough to play half a season of TAC Cup, how are they going to be worth drafting?
Option 2: everyone starts engaging in systematic draft tampering. Lots of minor injuries that take weirdly long times to heal, that sort of thing.

If the AFL want teams to invest in these academies, they need to make it worth the clubs’ time and money. I’m coming around to Peeto’s view that it’s more about combatting PR over the northern club academies than it is about actually expanding the player base. Not really a surprise I guess.

If you’re as confused as I am here are the regions:

Each club has a designated region to conduct their Next Generation Academy programs.  Please see below a list of the clubs that may be running programs in or around your area:

I think its a little unclear on the TAC cup bit whether that applies to just this year or all years. I can certainly understand it this year, none of the clubs have actually invested yet.

For ongoing years, the AFL is a little bit in a bind. Players have to be in the academies for three years, which means that clubs need to identify them around 14 years old and get them to sign up. The problem is, that the zones cover a lot of traditional ground as well as woop woop. I mean, Essendon has the Tiwi Islands and West Arnham which have got a lot of discussion on here, but we also have the Mooney Valley, Macedon Ranges, etc. (thanks Jack Hill for posting). I didn’t realise that, and was trying to figure out how the hell North had Tasmania.

So in these well developed areas with access to TAC and other state equivalents, how the hell do you identify if an indigenous/multicultural kid is pulled into footy due to the academy versus they were always going to play? I’m not sure. And maybe this approach is the AFL’s heavy handed way of trying to adjust for that.

But then as SplitRound said, if you do find a kid who wouldn’t have followed footy, and you lure him from soccer/cricket/whatever to play, and you’ve put time into him since he’s 14, both you and he are going to have an expectation that when he reaches 17 he’ll be good enough for TAC. Otherwise as SplitRound said, what is the point? Its not like the northern kids are expelled from the traditional U18 system. And hell, if kids are willing we may want to get some of the Northern kids from our zone to come down and board and play. Maybe they’ll all be in the APS system???

Presumably it’s based on the “multicultural” and indigenous populations of those areas.

Pies, Roos and Saints to fight over the same Melbourne City scraps.

Understand the model as it’s used in business to encourage private investment in areas where government wants to develop, but not necessarily fund.
Something doesn’t sit right with me though…
No doubt Hawthorn and Collingwood will find some way to exploit the system gaining an unfair advantage… The AFL will then react and change the rules the year we’re due to pick up a gun from the Tiwi…
Also, I think the AFL should be taking the lead and doing the heavy lifting throughout the indigenous communities particularly in the NT.
Leaving it up to clubs could be risky business.