Season 1 finished with a cliffhanger and we can’t to find out what happens in the first episode of the all new season of ”I’m a Denialist, Get Me Outta Here!”

This season will pit a lone denialist against an echo chamber of irritatingly informed arseholes with their pesky facts and graphs that don’t feature curious and seemingly deliberate metric anomalies. It all takes place on the former land mass of Fiji, now a series of roped together car wrecks and animal corpses. Leave your religious rhetoric behind, weehoo!

I’m just here waiting for you animal eating ■■■■■ to go vegan to fight climate change.
Save the planet while you safe yourself you selfish ■■■■■!
/end rant

Rapid global phaseout of animal agriculture has the potential to stabilize...

Animal agriculture contributes significantly to global warming through ongoing emissions of the potent greenhouse gases methane and nitrous oxide, and displacement of biomass carbon on the land used to support livestock. However, because estimates of...

@nickhedley
Portugal is currently getting 97% of its electricity from renewables, and it's exporting a lot of excess capacity to Spain. Wind is currently supplying 64% of Portugal's power. As a result, power prices are just €4/MWh at the moment.
2 Likes
hambo January 16, 2023, 12:36pm #7

I’m here to be a righteous unemployed bum who can only afford to ride a bicycle. Well occaisionally I ride my motorbike and drive the car that I don’t really need. And I’d move to a smaller house if I didn’t have 100 skateboards and a bunch of other unnecessary crap that I have hoarded over the years.

Not posting for the political relevance, posting because this is just funny. 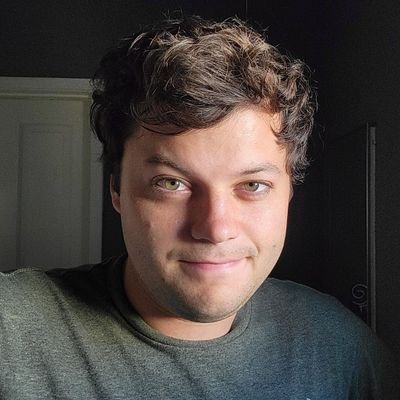 @edgarrmcgregor
Asked ChatGPT how we can fight climate denialism. The response was better than anything I could have written. https://t.co/SFunXZNVUV 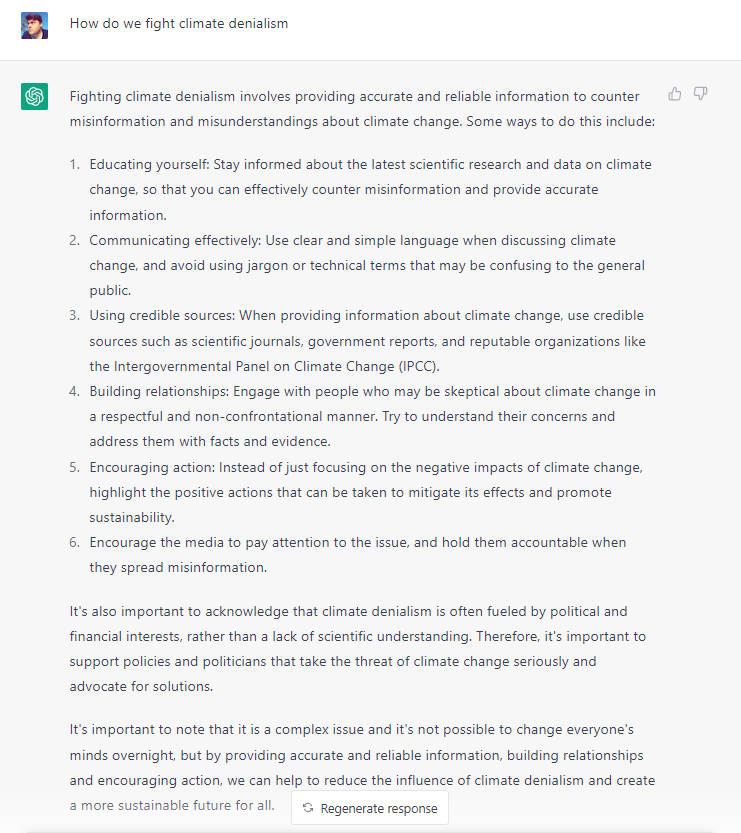 It’d probably say something pretty similar if you asked it how to combat the threat of the extreme left climate alarmism religion. Would agree that denialism is fuelled by politics and money at the upper echelons, but a lack of understanding (and a dash of cognitive dissonance) is absolutely what fuels it at ground level

I’d say you generally stick to these Benny, but it’s not gonna change the minds of many people that are convinced solar cycles are the only thing that affects the climate

My thinking is you don’t change people’s minds in the moment. There’s a self defence mechanism that kicks in and blocks most people from even considering they are wrong. It has a real personal cost to change your mind on something you’re heavily invested in. But if you’re not harsh and drip feed information, some people absorb it over time and change their minds in the days or weeks afterward.

And if you don’t convince the person in the online debate, there’s a larger audience reading the discussion who will each have their own reactions.

Let me ask this question; how much warmer on average is due to human induced CO2 as of today

Do you actually want to know the answer or are you asking me to spend a heap of time doing your research only to completely discard what I give you?

I am just wondering what the impact of a global reduction of 1.5 degrees would have on the output of agriculture?

Agricultural output would be fine.