Massive effort by the club. Our saga debt is now expected to be eliminated by the end of 2018 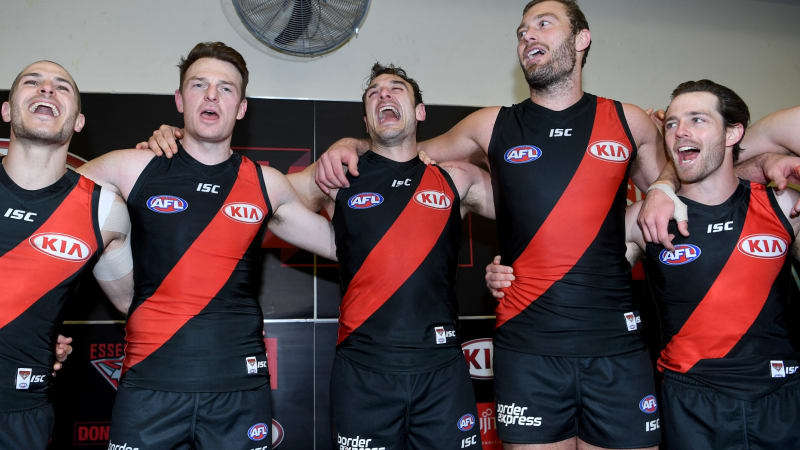 Essendon's journey back into September is set to be marked by a record profit of more than $4 million, in a result the Bombers hope will make them debt free within 18 months.

Thanks for posting, but I still refuse to click on Rage or Herald Scum links

Thanks for posting, but I still refuse to click on Rage or Herald Scum links

As the club prepares to play finals for the first time in three years, Wednesday’s All-Australian dinner should confirm three Bombers in the final team, with young gun Andrew McGrath the hot favourite to take out Friday’s Rising Star award.

To put the Bombers’ expected financial position into context, Hawthorn, during their mesmerising three-peat, recorded successive profits of $3.1 million, $3.4 million and $3.3 million, but never broke the $4 million mark.

It means the Bombers’ daunting $10.5 million debt – largely accrued due to the drugs saga – could possibly be wiped by the end of 2018.

The club has 68,000 members, more than 10,000 more than last season and the single greatest increase of any club. Only Richmond boasted higher attendances than Essendon, despite most of the Bombers’ home games being played at Etihad Stadium. This has directly resulted in match receipts exceeding budget projections by more than $1 million and allows the club to continue to sign blue-chip sponsorship partners such as Fujitsu and Kia.

Campbell admitted that despite some optimism at the start of season, there was still a level of uncertainty about how quickly the club would rebuild its brand.

“To get to the point we are now, to have played really good football throughout the year and qualified for finals is something all Bombers’ fans should be proud of, but we realise there is a really big opportunity in front of us and a lot more work to do.”

Given what has transpired at Tullamarine in the past five years, the fresh air of positivity is rejuvenating almost every aspect of Essendon.

Not only are membership and crowd attendances up, but the team is playing enthralling football under John Worsfold.

After a 2016 season in which they averaged just 65 points for – albeit in exceptional circumstances – Worsfold admitted in the pre-season that scoring was a concern.

They now have one of the most dangerous and dynamic forward lines in the competition, and are averaging 97 points.

It keeps the fans coming in their droves, with the club even managing to pull impressive crowds against struggling interstate teams Fremantle (42,665 in round 23) and the Brisbane Lions (41,246 in round 15) at Etihad Stadium.

“The fans have been absolutely incredible,” Campbell said. “Their support is second to none. We are incredibly proud of what they’ve done to help us to get to the position we’re in now.”

While there are no AFL games this weekend, the Bombers are still likely to score significant victories at the All-Australian and Rising Star ceremonies.

The trio of Joe Daniher, Zach Merrett and Michael Hurley are all likely to be named in the final 22 after making the squad of 40.

He and gun midfielder Merrett would be All-Australian for the first time if selected, while for Hurley it would be his second nod after making the 2015 team.

McGrath has played 20 out of 23 games in his first season, averaging 20 disposals and four marks.

Essendon also believe they can be seen as a destination club again and are making a late but significant play for Greater Western Sydney star Josh Kelly.

The Bombers are quietly confident that if Kelly does decide to return home, they will be as good a chance as fellow contenders Carlton and St Kilda.

And although the club is unwilling to comment publicly, it remains privately pleased that James Hird is making a return of sorts to the game after agreeing to present this year’s Norm Smith Medal, after an offer from the AFL.

Essendon is back baby

Well done to the supporters who didn’t let the club live on its knees.

To put the Bombers’ expected financial position into context, Hawthorn, during their mesmerising three-peat, recorded successive profits of $3.1 million, $3.4 million and $3.3 million, but never broke the $4 million mark.

Weird. It’s almost like a goldfish with a membership isn’t actually valuable or something.

The ■■■■■■ targeted us because we were the only ones that could cop such a pounding and still survive.

A lesser club would have folded 10x times over.

To everyone who trashed our club to curb can suck a big fat one.

For those of us who stayed strong through the saga… or even those who broke, we are not surprised at this news. This is the greatest club in the land and, in some small ways, this was the wake up call we didn’t want but may actually help us in the long run. I always felt that once we survived, and boy was that hard, then there was only one direction we could go.

If i was Josh Kelly… and the money is roughly equal… why wouldn’t you choose us? The most pleasing thing for me this year has been the continued growth of our younger players. We have gone through a list transition and we are now in better shape than we have been for a long long time. I love the fact that it is guys like Merrett, JD, Hurley, Parish, McG, Gleeson, Walla, Fanta, McKenna that dominate the ‘votes’ each week. That is a core that can play together for another 5-8 years at least. Success will come and won’t it be sweet?!!

This is why those peanuts losing their ■■■■ at our debt level were ■■■■■■■ idiots, our revenue streams are too strong for that debt to be unmanageable.

This is actually flaming outstanding.

Upgrading the dungeon worked a treat! Who was that mouthbreather that ran for the board? I mean people here lost it as he wanted to sack Hird, but what stuck out for me was his line of “Don’t borrow what you dont have” or some crap.

This is exactly WHY you don’t vote for idiots like that.

That one that was trying to knife the others?

I bet if we take the $4m to the casino we could double it.

Nah he was “just an ordinary supporter” some self important boomer.