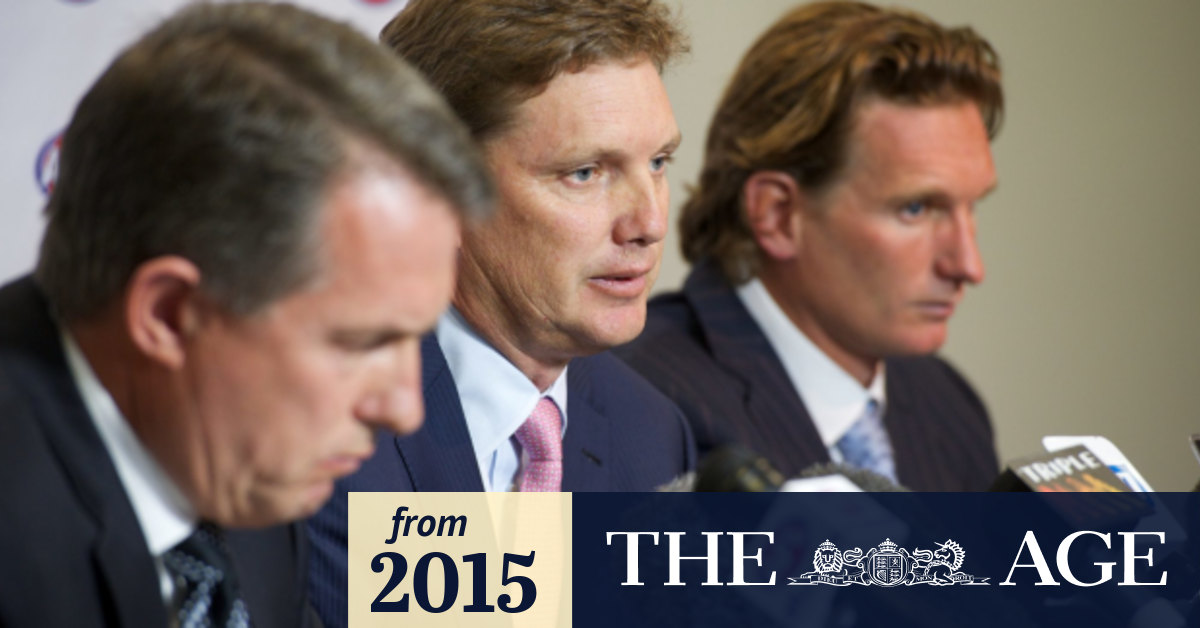 Former Essendon chairman David Evans returned to the club early on Monday in his first official visit to the completed $27 million training base that was the legacy of his presidency.

Former Essendon chairman David Evans returned to the club early on Monday in his first official visit to the completed $27 million training base that was the legacy of his presidency.

The significant Evans visit was part of a power breakfast meeting of former Bombers presidents. Paul Little, who is expected to step down by the end of the year, did not attend the talks. Nor did former Federal finance minister Lindsay Tanner who was at another meeting at the club on Monday and who looks certain to replace Little.

Club chief Xavier Campbell has communicated to Essendon powerbrokers that the club hoped to secure John Worsfold as coach over the coming week as the Bombers move to restructure their football department following the departure of James Hird. Worsfold now looks certain to be appointed Essendon’s senior coach after announcing his departure from the Crows on Tuesday

Campbell summoned the ex-presidents as part of a new long-term strategy to rebuild the club and its brand and redefine the Essendon heritage after three damaging and scandal-ridden seasons in the wake of the Bombers’ 2012 drugs program.

Although Evans first established the annual meetings of former chairmen he has not attended any such talks since leaving the club.

The Monday breakfast was one of a series of scheduled meetings by Campbell with club stakeholders which includes the past players, club members, the cheer squad along with ongoing meetings with players’ parents and families.

Fairfax Media understands the Bombers hope to advance talks with Worsfold this week following Adelaide’s season-ending loss last weekend. The former West Coast premiership coach, who has already envisaged returning to coaching and putting together a coaching team, has spoken with a number of potential assistants including Guy McKenna. But the Bombers have flatly denied yet offering him the job and have refuted reports of a tabled five-year deal for Worsfold.

Evans’ attendance at the Monday meeting was seen as pivotal to the marking of a new and positive chapter for Essendon. Previously closely aligned both professionally and personally to Hird before the then coach turned on his old friend, Evans quit the presidency in dramatic circumstances in August 2013. His departure followed a group of directors including Little questioning the club’s strategy in dealing with the AFL and ASADA at the time.

Campbell told the attending former chairmen - who included Greg Sewell, Neil McKissock and Ray Horsburgh - that he and the club hoped to defer to them for advice over various issues. Of the living recent club presidents only David Shaw did not attend due to another commitment.

Essendon plans to move to secure its financial future with the purchase a large block of land adjoining the True Value Solar Centre and transform it into a multi-purpose venue including apartments and offices. Evans put forward some suggestions regarding the potential multi-million dollar investment.

Mark Harvey is contracted for next season and is expected to stay at Essendon in a mooted Worsfold team along with Mark Neeld and recent caretaker coach Matthew Egan. With Neil Craig in talks with Carlton, the futures of list manager Rob Kerr and recruiter Adrian Dodoro remain unclear.

There's no point hating Evans. Hold him in contempt if you like, but I think hating him is over the top.

This is a guy who had a very competent, ruthless, legendarily tough father, and he got his start in business - and plenty of leg-ups on the way - due to his father’s name. He became mates with James Hird, he became mates with a lot of other top people in footy, he eventually stepped into the top job at Essendon, and most likely none of it would ever have happened if he had a different surname. Thing is, he probably never realised this.

Then he gets thrown into a really tough situation when his mate Vlad calls him to let him know the ACCC are after his club. This would have tested the very best managers and leaders in the business world. And as the saga drags on, Evans realises he simply isn’t one of them. Tougher, smarter, more ruthless people at the AFL turn him inside out and take him to the cleaners. People who he genuinely thought were his mates sucker him, or throw him to the wolves. He does a deal with the AFL because he expects everything to be handled by mates, like mates, over a glass of wine somewhere because that’s how it’s always worked for him. He realises too late what’s really happened, the his ‘mates’ long ago decided to sacrifice him and his club, that he’s been gulled into burning Hird on behalf of people who don’t give a ■■■■ about him, that his failures have brought the footy club he genuinely loved to its knees, and that he’s exposed enough legally that his lawyer is warning him he can never talk about what happened because he’d expose himself to prosecution and/or massive damages.

He’s failed, in the most vivid and spectacular way possible. He can’t even deny the plain fact of his own staggering failure to himself, cos he’s reminded of it every time he opens a newspaper or every time he goes to call someone and then realises ‘oh, yeah, they aren’t my friend any more’. Could he come clean and help the club out? Probably yeah, but how many people here calling for his blood could say, hands on hearts, would say that they’d do it knowing that it could mean prison time or huge fines?

I’m not surprised he broke down. But as I said, there’s no point hating him - you almost certainly can’t hate him as much as he hates himself.

Unless you are his Wife or his therapist, this is all nonsense and fiction.

As I understand all the decisions to work with the AFL, self-report and call in Ziggy were Board decisions. His mistake was repeating anything Vlad told him, if indeed Vlad said anything.

I just wish it wasn’t SWSNBN who ran with the story.

I have zero rage about this

They have made huge contribution to our Club. He may have made a mistake or two, but ieveryone deserves a second chance. Get over it and move on.

They have made huge contribution to our Club. He may have made a mistake or two, but everyone deserves a second chance. Get over it and move on.

Was thinking about that today, trying to put myself in his shoes. Couldn’t do it.

I don’t hold anything against him. I really don’t.

I think he was under immense pressure and had to make a decision. He made what many people think was the wrong one. It happens. He made a lot of good ones in his time too.

To write him off for making a mistake under pressure would be foolish. Bloke would still have a lot to offer.

A Mistake isn’t a conscious effort to throw your mates under the ■■■■■■■ bus.

I have zero rage about it too.
Much laughter, although it would seem officially I don’t even have that.

They have made huge contribution to our Club. He may have made a mistake or two, but everyone deserves a second chance. Get over it and move on.

Absolutely agree. The Evans’s have given enormously to our club over many years. True bombers, who were prepared to roll their sleeves up for our club.

He attended a past president’s breakfast. This does not warrant the ‘welcomed back into the fold’ headline as he no longer holds an official position at the club and has not been offered one. I expect he was invited to all similar meetings since his resignation so he has never not been ‘welcome in the fold’ - instead he has chosen to stay away.

This is really a non event.

I have zero rage too, but Evans can still GAGF.

The TVSC is not Evans legacy. His legacy was throwing his mate and football club under the bus to help out his business partner.

Waaaay too much wilson on the board right now

Is this some kind of sick joke?

I don’t know whats worse the fact that we have invited that POS back to Essendon or the fact that Harvey might be staying on next season.

“Evans’ attendance at the Monday meeting was seen as pivotal to the marking of a new and positive chapter for Essendon. Previously closely aligned both professionally and personally to Hird before the then coach turned on his old friend”
,
Typical SWNBN twisting the truth again.

Interesting about the apartments and offices, didn’t know that. How far along is it?

Is Essendon trying to see how far they can pi%% off their fans before people walk away from the club?

“aligned both professionally and personally to Hird before the then coach turned on his old friend”
He’s gone you harpie, give it a ■■■■■■■ rest.

Never mind Evans, is there anything the club didn’t exclusively tell Wilson?
Maybe who they want as their first round pick?
Farkinlooooooool.