Fake meat that's better at being meat than real meat!

WE SHOULD have known the revolution would start with a burger.

A Quest for an All-American Burger… Without Meat
Tristan Lutzenews.com.au

WE SHOULD have known the revolution would start with a burger.

In an effort to fight the growing impact of our diets on the environment, a company called ‘Impossible Foods’ has set out to do the impossible: create a meat-free burger so delicious, so juicy, so bloody, that even the most ardent carnivore would choose it over the beef alternative.

In one of the most potentially game-changing pieces of food news in decades, it looks like they may have succeeded. After years of development, this burger-shaped harbinger of a new age finally hit the menu of David Chang’s Momofuku Nishi in New York this week.

This level of perfection is essential because, as the company’s founder Patrick Brown explains, “we had to make something that a meat lover will prefer to what they’re getting today from an animal.”

“The only customer that we care about … is someone who loves meat, is not looking for an alternative, and is not going to compromise on the pleasure of eating meat.”

In short, as the company’s website states, “we don’t make veggie burgers”.

This kind of sensibility shift is increasingly critical, according to many environmental scientists, because of the global impacts of our eating habits.

A study this year by the Oxford Martin School predicted that emissions caused by food production and other agriculture would, within three decades, consume approximately half of the world’s “carbon budget”.

By simply reducing our meat consumption to the levels recommended by health guidelines, we could reduce this impact by up to a third.

It is these consistently dire warnings that has seen Impossible Foods raise more than $US180 million for its work to date, its high profile backers including Bill Gates and Google.

To create the Impossible Burger, the team began by breaking down the compounds found in beef. Once these were isolated, they could rebuild by finding the same compounds in plants and figuring out how to put them together.
In every way the ‘Impossible’ burgers behave like regular beef patties. Picture: Impossible Foods

In every way the ‘Impossible’ burgers behave like regular beef patties.

Their key discovery was a molecule called “heme”. Heme is what gives meat its unique umami flavour, its iron and even the red colour and consistency of its blood. The same molecule occurs in plants, and it’s the key to making the Impossible Burger taste like meat, contracting on the grill like meat and even bleeding a little when cooked rare.

The results have also been impressive from an environmental standpoint. An Impossible Burger requires only five per cent of the land and a quarter of the water that a beef burger does, and produces only an eighth of the greenhouse gases.

As the company puts it: “replacing one quarter-pound beef patty with an Impossible Burger saves as much water as a 10-minute shower, takes 18 driving miles of greenhouse gas emissions off the road, and frees up 75 square feet of farmland”.

With renowned chef, food writer and anti-vegan David Chang’s support behind the finished product (he says he was “blown away” by his first taste), the endeavour to make it delicious can be called an unequivocal success too.

Once the burger is widely available, Impossible Foods has their sights set further: “our research will enable us to produce virtually any meat — beef, pork, chicken, fish — as well as cheeses, yoghurt, milk, and cream — all from plants.”
Bring. It. On.

Great. The silicone ■■■■ of food. Fanfuckingtastic!

Lol. Debatable about plastic ■■■■ being as good as real ones but great analogy.

what did blitz’ meat ever do to you?

If it tastes as good, and had no ill effects, I’m all for it.

What does @Meat have to say about this?

Its a good direction for the food industry. As much as I love flesh the global demands aren’t sustainable.

I thought meatshake was a dance invented by Meat.

Isn’t that how those Ruski dudes got away with PED use?

Oops, meant to post this here and not in Science…

Yummy, who wouldn’t want to grow their own steak or chicken nuggets at home. You too can get involved over at Indiegogo. Tuck in. 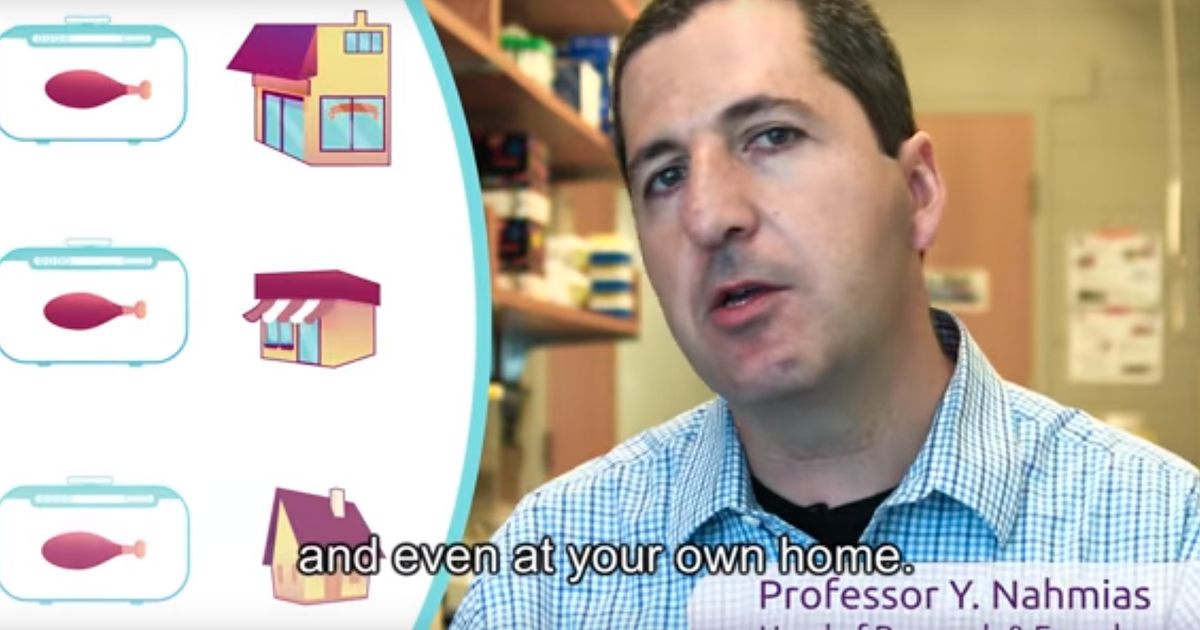 This Company Wants You To Grow Your Meat In A Machine At Home...

The startup is asking for a cool $2.5m to get it into production.

Now, there’s a new player in town and he has pretty wild ambitions.

Professor Yaakov Nahmias, a biochemical engineer at the Hebrew University of Jerusalem, has developed a new culturing method, called SuperMeat, which promises healthier, humane meat that is better for the environment and could help tackle food shortages.

The real selling point, Nahmias said, is his concept’s ability to localise the production of meat: “We can place our meat-generating machines in local supermarkets, in restaurants and even at your own home.”

The company also claims that SuperMeat will stem food shortages because it requires minimal resources to culture. Lab-grown meat uses 99% less land, emits up to 96% less greenhouse gases and uses up to 96% less water than the meat industry today, according to SuperMeat.

So how does it work?

Scientists take a small tissue sample from a chicken, grow and duplicate the cells in a “special nutrient soup”, which then forms miniscule tissue within a unique environment that mimics an organic habitat. The tissues then grow into actual meat.

It it sounds simple, it’s not. The company has already crowdfunded more than $123,000 (£93,400), but that doesn’t even cover the proof of concept. $1m (£761,000) would fund an efficient production method of small chicken tissues. But the scientists say they need $2.5m (£1.9m) to create a cost-efficient prototype that could produce edible meat.

It could be more PR stunt than “best option”. I thought the tissue culturing thing would be the bomb. As mentioned, it uses almost no resources or space to make. The work done on the heme component is interesting though.

Does anyone remember that “I can’t believe it’s not butter” doesn’t taste anything like butter and margarine tastes like greasy burnt pus?

This is all getting scary now.

Does anyone remember that "I can't believe it's not butter" doesn't taste anything like butter and margarine tastes like greasy burnt pus?

That was just tweaked margarine though wasn’t it? I think it only got anywhere because it had a comical romance novel model as the face of the advertising campaign. In saying that the proof is in the pudding so I’m not making a judgment until I eat one.

If I want to eat fake meat, I’ll just go to Maca’s.

Anyone would think this was new the way they’re carrying on.

Man, next thing they’ll be telling us we ain’t got enough oil and we’ll be driving around in electric cars. Pft