I’m listening back to old episodes of Martin Molloy and this came up. I waz a bit young at yhe time and don’t remember this. Can someone explain to me what happened?

There was also Pluugers groin and Sydneys no sex before finals rule.

Andrew Dunkley got reported for misconduct for gouging Hirdy’s eye in 96 PF. If you look at the footage of Sir James getting his Brownlow he’s got stitches under his eye, so Dunkley did a good job! He was suspended for 2 weeks, so should have missed the GF. Not sure if there was an appeal in between, but the Swans successfully got an injunction, so Dunkley actually played the GF.

That’s a pretty basic summary. Not sure if I missed anything?

Wow, so it actually went to a non AFL court?

I’m listening back to old episodes of Martin Molloy

He also held Hird (the best player on the ground, on 25 and 3 goals) to the ground for a very long time while doing that gouging. The umps looked at that, said it was fairer than climbing the goal post, and let Lockett kick the winning point.

Patrick Stewart in the Maccas drive through

Is this also the game fletcher was pushed into the seats and needed to go off for stitches?

It’s always about Tum and Phul for me.

After Dunkley was suspended on the Tuesday night(?), they waited till Friday afternoon before going to court and getting a stay on proceedings. They didn’t bother contesting the actual case after the Grand Final, of course.

This was why the AFL introduced an appeal process at the start of 1997; the judge at the time didn’t like “one strike and you’re out”. Even though, in this case, it was clear as hell he was guilty and the Bin Chickens were extracting the urine with zero interest in legal justice.

And Michael Symons missed a couple of absolute sitters in the last.

The stitches under Hird’s eye when he won the Brownlow were caused by Dunkley. 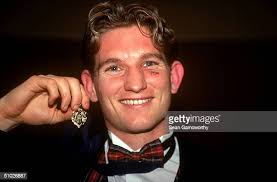 I’m listening back to old episodes of Martin Molloy and this came up. I waz a bit young at yhe time and don’t remember this. Can someone explain to me what happened?

There was also Pluugers groin and Sydneys no sex before finals rule.

How did Sydney police the no sex rule?

We would’ve been roadkill in the GF had we held on. The whole bench was injured (Lloyd went to hospital with a ruptured spleen), Mercs missed the PF after injuring his groin in the SF win v West Coast.

A grand final loss to a Carey-led North, is something i’m very pleased we never had to suffer through.

That would have sucked.

Plus the reserves did a seniors 1989: after smashing North to get to the grand final, the selection rules + injuries (including Lucas, IIRC) meant we named a grossly-weaker team for the GF. North were allowed to stack their team, and smashed us.

Lose two finals by a point including a prelim, Hird wins a brownlow, the reserves make the grand final…

September used to be a busy time for our club.

Bomberblitz historians can confirm, but I believe Fletcher went over the fence in the drawn home & away game earlier in season.

I watched that game in a kitchen with a bunch of cooks and waiters in some hall while at my sisters debutante ball.

But as mentioned above, I think Norf would have rolled us over.

Yep, North would of eaten us alive the following week. We were very fortunate to get to the prelim at all with the at least one final held in Melbourne mandate at the time gifting us victory over the Weags.