Well, what did everyone think?

Matt Smith calling someone a Karmichael, even though he seems a prize one himself.

Just finished watching. You can tell it’s a GoT spinoff by all the blood/gore/sex and political intrigue.

Enjoyed it. King’s throne room could do with a bit of a reno though.

first show with dismembered limbs,lots of rooting,lots of political intrigue , families eying each other off and backstabbing…. sounds like the essendon board but it was very watchable and a great first episode… hope it doesn’t go downhill like season eight GOT

Is that dagger that Vyseris carries around the same one that ends up being used to kill the Night King 200 years later?

Not sure if I need a spoiler alert for that or not. Surely not!

This was my initial thought there needs to be more storylines. If it’s just brother vs brother/niece it’s not going to be anywhere near as captivating as GoT.

I liked it. I was a bit disappointed there was no opening credits like GOT as I always loved that sound track and watching all the castles develop but I get that won’t be the focus in this one.

Is that dagger that Vyseris carries around the same one that ends up being used to kill the Night King 200 years later?

Not sure if I need a spoiler alert for that or not. Surely not!

I haven’t read the book/s so was a bit lost in the first ten minutes with quite a few characters and their names.

Once I got into it, thought it was good. Looking forward to the next and hopefully more dragons.

Not a bad start.

i found the direction pretty appalling really. was so disjointed and the writing felt weak. not holding hopes its gonna be any better than season 7 and 8 of GOT

It’s not like I’m going to stop watching, but I have to agree that I’d prefer the slow pace of the original seasons of GOT.
More private time with the different houses.

They;’re gonna need to have a pay off moment soon to suck people in more. At the moment the writing direction and pacing is just garbage.

Happy to see the opening credit scene and hear the theme song. Hopefully we start seeing more houses being drawn into the main plot. It feels like they have been making a real effort to introduce us to the main characters to set up where the story is going. Now that we’ve established the Red Keep characters I’m hoping we’ll get more meat on the bones with Daemon, the crab-guy pirates, how the houses will start scheming and aligning, maybe some Dornish shenanigans, the free cities, etc.

It does demonstrate really well just how hard it is to follow up a phenomenal show like GOT (weak ending notwithstanding).

I’ll also add that I’m really enjoying it, but I came to terms that it won’t be GOT well before I started watching it. I’ve found that’s the only way to ever enjoy spin-offs/prequels/sequels. If you go in expecting exactly the same level of thrill, you’ll almost always be disappointed. Go in with no expectations and you can enjoy/dislike it on it’s own merits.

Also again, Ozzie man review for those that enjoyed his GOT contributions: 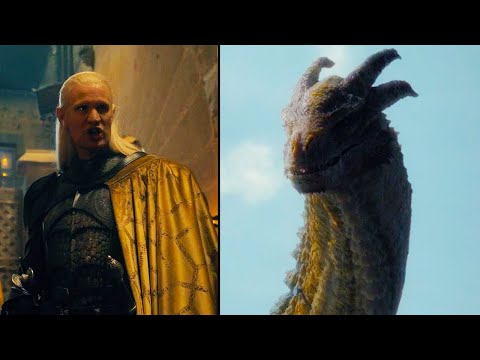 I saw an interesting (very probably bollocks, but still interesting) fan theory after the discussion between Viserys and Rhaenyra about the white walkers, how it was information that was handed down from king to heir.
It was suggesting that Aerys’ famous last words ‘burn them all’ to (or at least near) Robert Baratheon wasn’t about King’s Landing at all, but rather the white walkers.
And that Robert’s Rebellion actually caused the migration south because there was no longer a Targaryen on the throne.