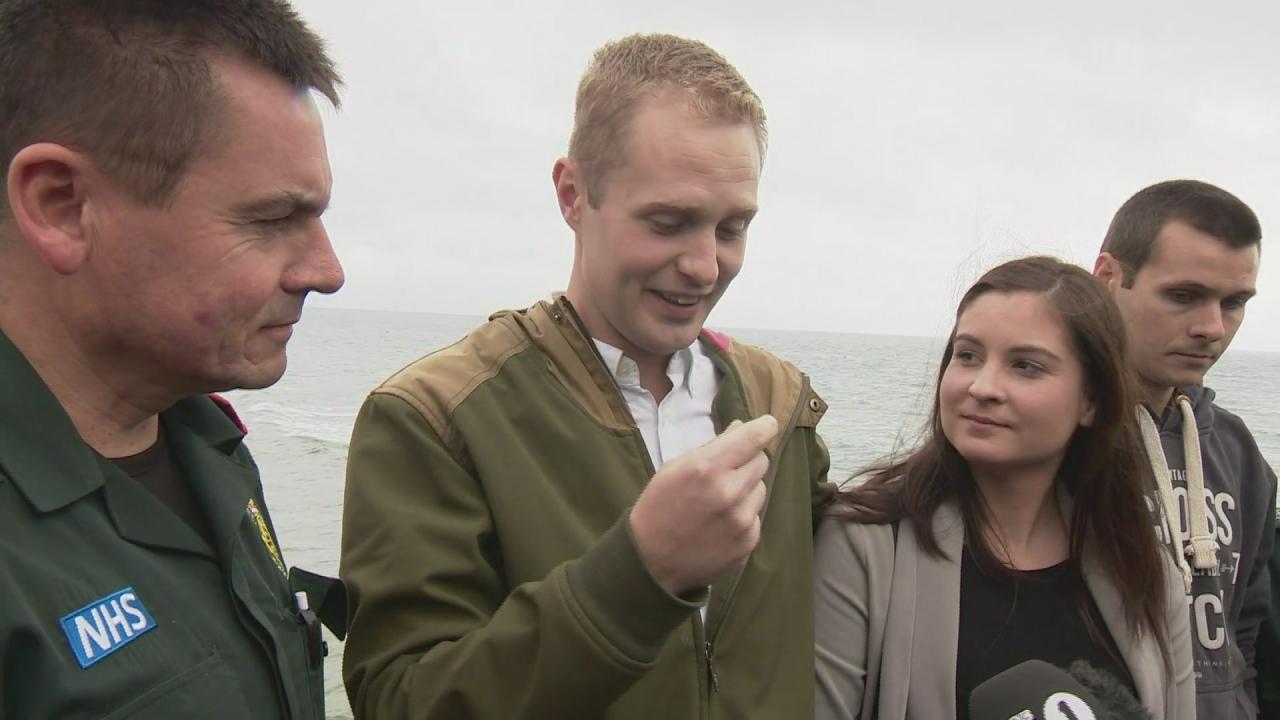 Angler who nearly died when Dover sole jumped down his throat reveals he was...

Sam Quilliam, 28, had just caught the 14cm fish when it took exception to his amorous advances and leapt down his windpipe, causing a complete blockage.

He collapsed and went into cardiac arrest as his terrified friends dialled 999 before performing CPR until paramedics arrived.

Mr Quilliam, from the New Forest, returned to the scene of the bizarre incident at Buscombe Pier, in Bournemouth, Dorset, on Friday and described how he had decided to give the fish a quick kiss before throwing it back into the water as it was too small to keep.

He said he had been inspired by Rex Hunt, an Australian TV fisherman who often plants a kiss on his catches.

“I picked it up and went to give it a kiss before I threw it back,” he said.

“I ran round the pier like a headless chicken and then passed out. It was terrifying from what I remember.”

Mr Quilliam stopped breathing for three minutes. When paramedics arrived, they used a laryngoscope to fully extend his mouth and throat then managed to grab hold of the fish’s tail with forceps.

But it took six attempts to pull the fish free as its barb and gills had become stuck in the angler’s throat.

Mr Quilliam was reunited paramedic Matt Harrison, who helped save him, and thanked him effusively for his efforts.

“Thank you, you are a credit to the NHS,” he said.

He also thanked his friends, Steve Perry and Matt Holmes, who called the emergency services and performed CPR.

“Steve and Matt and the paramedics did a great job to save my life,” he added. “I could have easily died and I feel very lucky to be here. I feel much better now, it’s like beyond winning the lottery. Me and my family are really grateful.”

Mr Perry, 27, who has known Mr Quilliam since school, said they had been fishing together for seven years:

“It was just sheer panic, it was horrendous,” he said.

"He was rigid, struggling to get breath, blood was coming from his mouth. I was very serious, nothing comical about it. We went from a great night catching fish from some friends to him on the floor.

“We reacted on our instincts. Matt was pumping his chest and I was doing the breaths. He was dead, his heart had stopped. I was so relieved when he came round.

“People have joked about it since but it wasn’t a joke. He could have died, he could have had severe brain damage. We just thank God he is still here.”

He added: “Sam and I are kind of even now, he stopped me falling off the edge of a rock when we were fishing once. He thanked me for saving him. We’ve had a lot of man hugs.”

Mr Harrison said: "I must say, after 17 years of doing this job I’d never seen anything like it, never seen foreign body quite like that. Many of my colleagues were astounded.

“I have never attended a more bizarre incident and don’t think I ever will - but we’re all so glad the patient has no lasting effects from his cardiac arrest, which could so easily have had such a tragic and devastating outcome."

Mr Quilliam insisted that the ordeal would not put him off fishing and said he had not ruled out kissing a fish again, adding: "Probably just a bit bigger… and not a sole.”

Angler who nearly died when Dover sole jumped down his throat reveals he was...

So that’s what Steve Perry’s been up to.
Get the original lineup back together and tour, jerk face.

Cod see that one coming a mile away …

Should be careful, Michael Douglas reckons that can cause throat cancer.

Why couldn’t this happen to Rex Hunt?

Let minnow when you come up with a better fish pun.

Let minnow when you come up with a better fish pun.

Why say “Dover Sole” when “fish” would be sufficient?

Probably thought the whiting was on the wall for him.

Why say “Dover Sole” when “fish” would be sufficient?

It’d be the shape of the fish, wouldn’t it?

A lot of fish would slide straight down but IIRC a Dover sole is a wide flat fish.

You seem to be Floundering with your memory a bit there AN?

I’m flathead you think so

No one knows what the hell a Dover Sole is.

I think it’s a fish that’s found near Dover.

Most people know what a Sole is …surely?

I think it’s a fish that’s found near Dover.